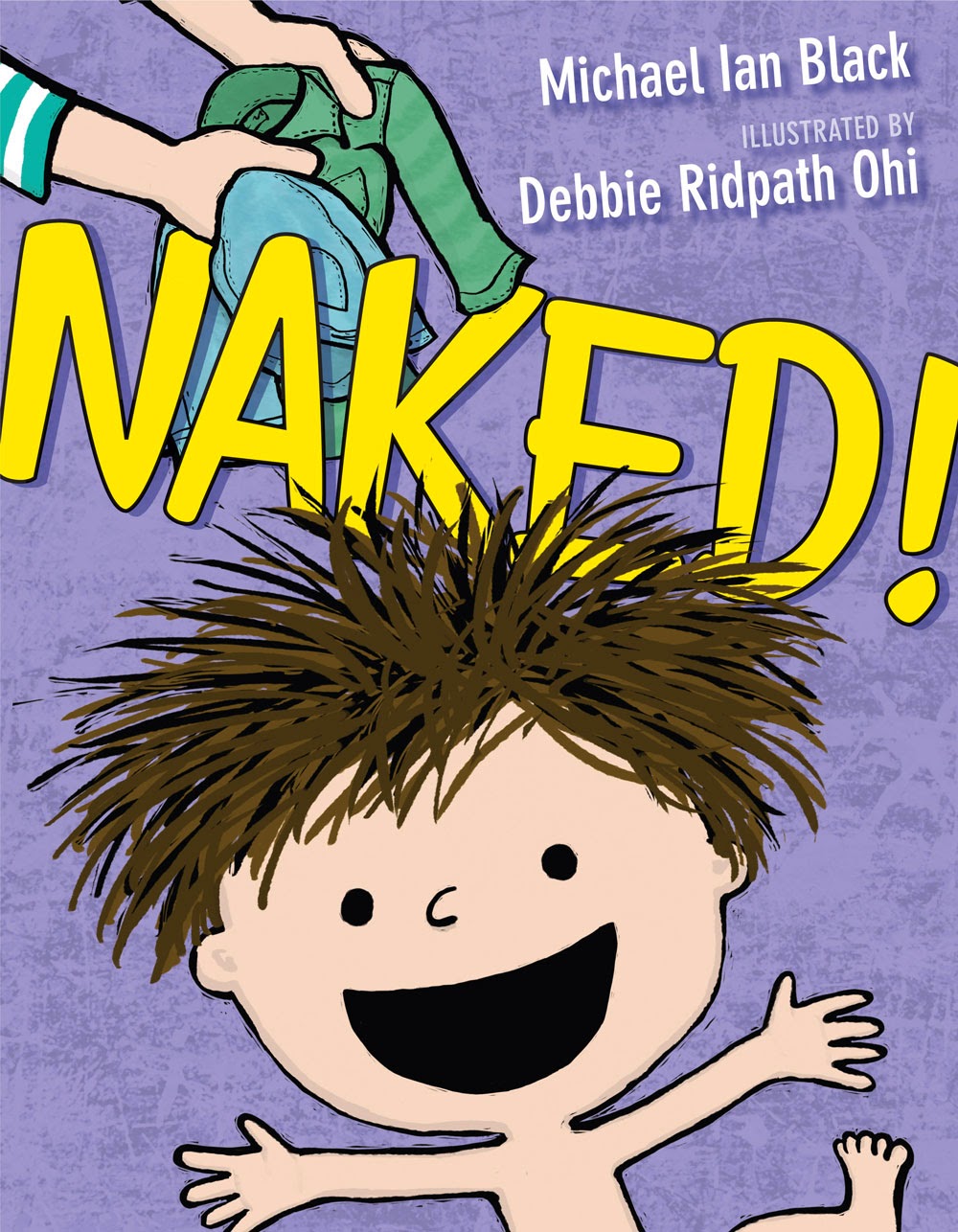 We are delighted to interview the talented author-illustrator Debbie Ridpath Ohi! Be sure to comment on this post and share it for a chance to win a copy of her forthcoming picture book, NAKED!

Tell us briefly about yourself and your background.


I grew up in Toronto as the oldest of three children. My mom was a housewife and my father was a school teacher. I had always wanted to write books for young people, but figured I would need to do that on the side while I had a job with a steady income. Everyone knows you can't make a living creating children's books, after all. :-) My favorite subjects in school were Art, Music and Math, but I had to drop either Art or Music in my first year of high school if I wanted to pursue a math/sciences track. It was a tough decision, but I ended up staying with Music because I was taking piano lessons at the time and enjoyed band. My Art teacher was upset that I opted out of the Art stream.
I graduated from the University of Toronto with a Bachelor of Science and two majors: Computer Science and Psychology. I worked as a computer programmer/analyst for two years before (with the encouragement and support of my boyfriend, who is now my husband) quitting so I could pursue my creative dreams. I taught piano, worked at the Toronto Public Library and a children's bookstore, did freelance writing and a bit of freelance art. 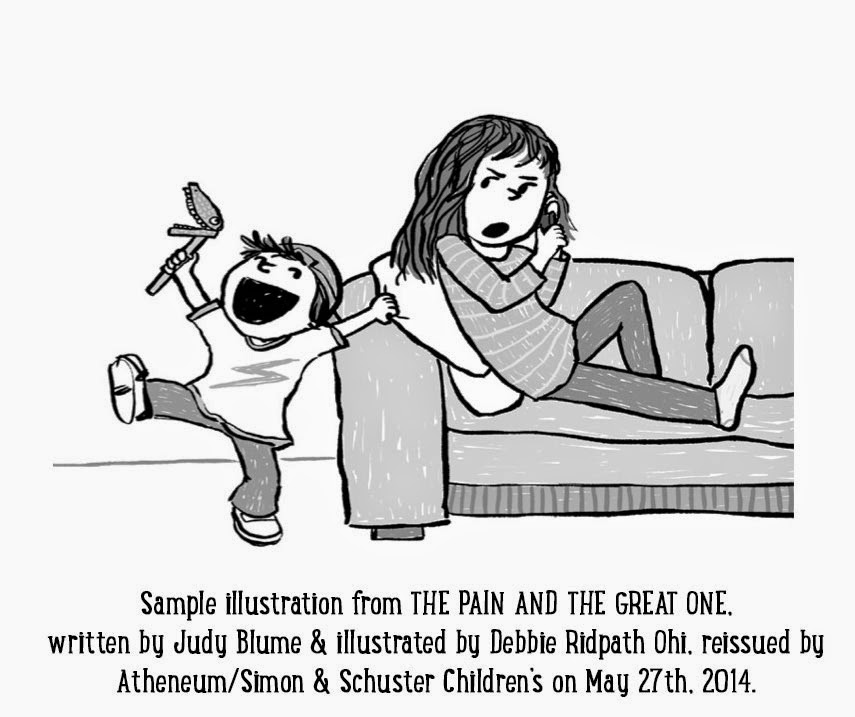 When the World Wide Web launched, I created a website for writers called Inkspot which became very popular. So popular, in fact, that I ended up spending more time managing it and my advertisers than I did my own creative work, which was not good. So after much research, I sold it to a company in the U.S. in order to turn my focus back on my novel writing. You can see a summary of my corporate experience here.
Santa Barbara area children's book writer Lee Wardlaw was my first mentor. I will always be grateful to Lee! Not only did she critique one of my early middle grade novels, but Lee also introduced me to her agent, Ginger Knowlton at Curtis Brown. Ginger is now my agent! I've written several MG novels and we've sent out two over the years. Although I could tell from the rejections that I was getting better and got close a few times, I never received a formal contract offer. I decided it was time to leave my cozy office and start meeting people in the industry.
Lee had told me about SCBWI conventions, so I started attending regularly in 2009. In 2010, my friend Beckett Gladney convinced me to enter the SCBWI Illustrator Showcase, and I ended up winning a Mentorship Program Award as well as an Honor Award. Not only that, but one of the Showcase judges (Justin Chanda, publisher at Simon & Schuster Children's) offered me a book illustration contract! I illustrated I'M BORED, a picture book written by Michael Ian Black, and it ended up being chosen as a New York Times Notable Children's Book that year. You can read more about my experience in my post, "How Rejection Got Me a Book Deal."

What projects are you working on now? Any books coming out soon?


I have 11 (yes, I said ELEVEN!!) book projects coming out in the next few months. One is NAKED!, a new picture book written by Michael Ian Black and illustrated by yours truly, published by Simon & Schuster Books For Young Readers on April 29, 2014. It's a fun story about a little boy who doesn't want to put his clothes on after taking a bath, and runs through the house with his mother in pursuit. You can find out more as well as get the free Teacher's Guide and other bonus info at my website.
I also illustrated the covers of ten Judy Blume classics being reissued in middle grade and chapter book formats, coming out from Atheneum/Simon & Schuster Children's on April 29 (middle grade books) and May 27 (chapter books). The chapter books will also have new interior illustrations by me. You can read about how I became illustrator for this project at my post, "Part 2 of My Big News: Judy Blume, Simon Schuster Children's…"


I was so excited to read about your Judy Blume covers and chapter book work. How excited and proud are you of this work? Did you ever get in touch with Judy Blume? What was the most interesting part of the assignment?

In answer to your first question, I am VERY VERY VERY (VERY) EXCITED AND PROUD. Even thinking about it now makes me want to jump up and run around my office, screaming. But I don't, because that would freak out my husband, and he's already put up with a lot during my über-intense Judy Blume project period.

I wasn't in direct contact with Judy Blume during the creative process, though we did exchange tweets a few times: 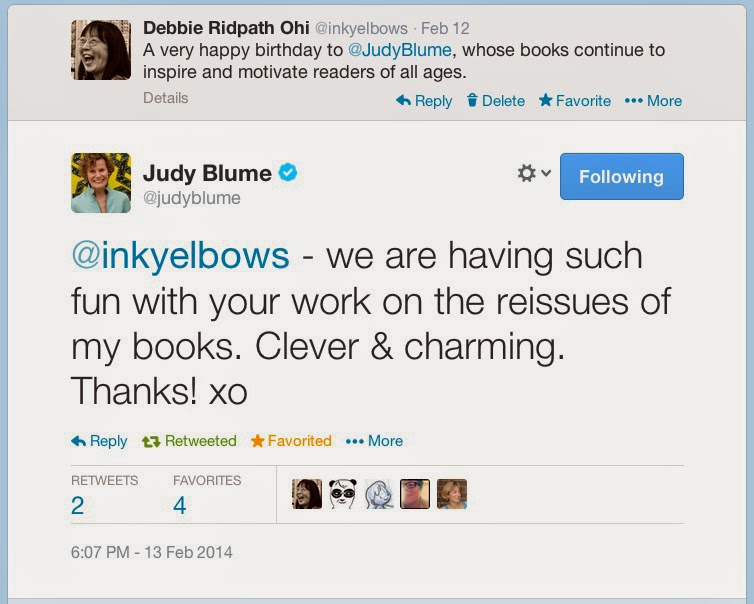 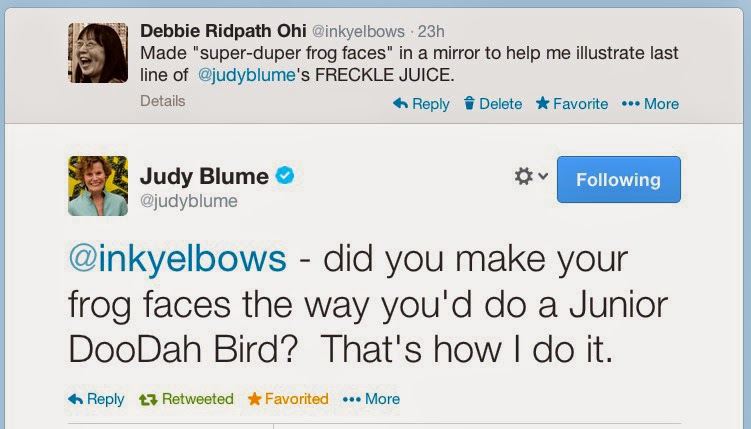 And yes, I went totally fangirlsquee every time it happened.
The most interesting part of the assignment? Discovering, when I reread all the Judy Blume books, that the issues raised in these stories are just as relevant now as they were when the books were first published. Plus I was reminded all over again of Judy Blume's wonderful writing. One challenge: Having to keep myself from getting sucked TOO much into the story sometimes upon rereads so I could focus on illustrationstuff. 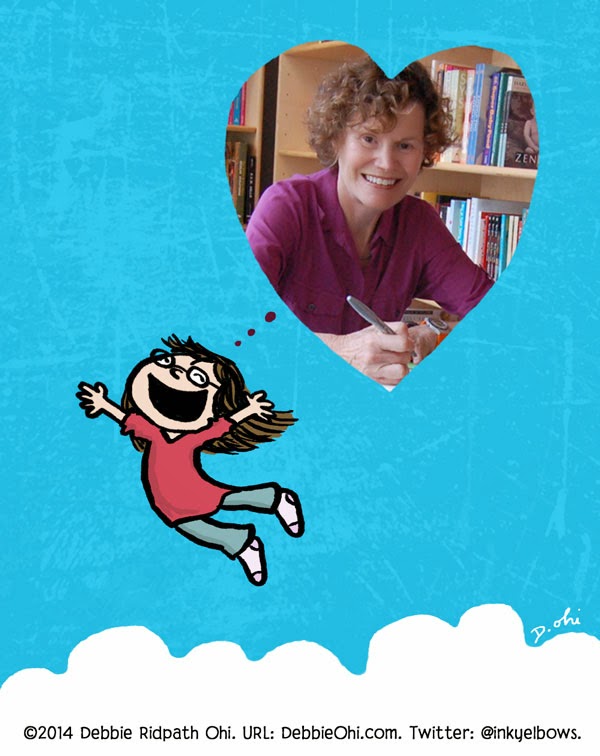 Was there a moment when you felt like you "made it" as a children's illustrator? 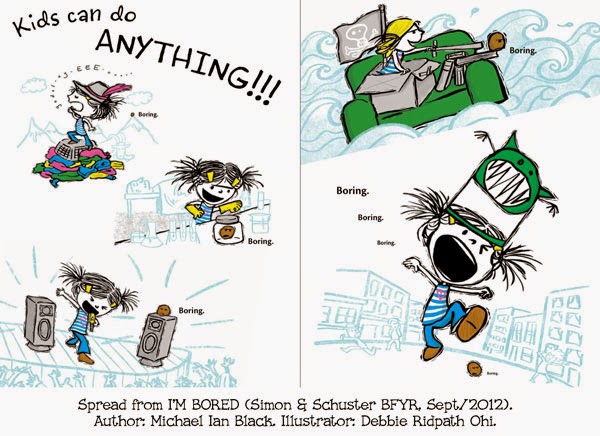 2) The first time I declined a children's book illustration project because I didn't have the time in my schedule.

What is one piece of advice you'd give to an aspiring author or illustrator?

To remember that it's not just about the work. We're assuming that you're working hard on your craft and have done everything you can to hone your skills.

For publishing success, however, I've discovered that so much depends on being at the right place at the right time. My friend Maureen McGowan has a great analogy; she compares publishing success to being hit by lightning. While you can't control when you're hit, you CAN build a bigger and better lightning rod. Go to SCBWI conventions (and CANSCAIP's PYI, if you're in Canada). Meet other authors and illustrators. Learn how to effectively use social media.
Also (I know you just asked for one piece of advice but I can't help myself), develop a thick skin. Accept that rejections and criticisms are part of the business. Don't take things personally. Persist. I'm convinced that one reason many aspiring authors and illustrators don't succeed is because they give up too early. Take a break if you need to, but then come back. DON'T GIVE UP.
Also (heck, I already broke your "one piece of advice" rule so I figure I may as well keep going), make sure you keep learning new things. Challenge yourself. Experiment. Push beyond your personal comfort level on a regular basis or you'll get into a rut. 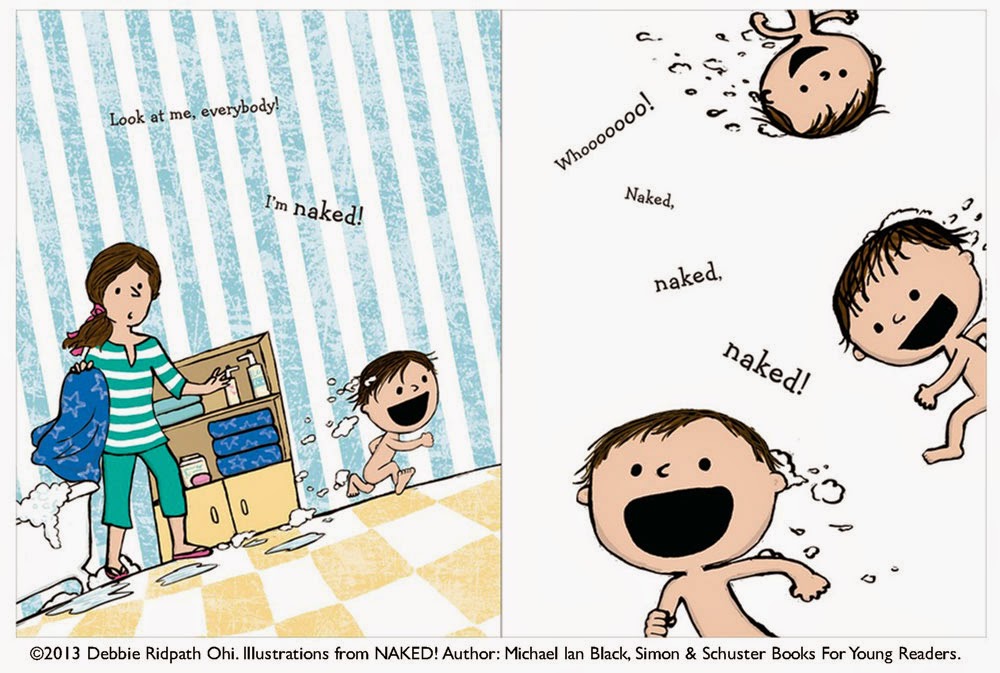 Thanks for all of your advice! What is one thing about yourself that most people don't know?

I have a musical side. Some music-focused personal facts people might not know:
I'm a filker (here's my post explaining what a filker is) and am in a filk group, Urban Tapestry. We've performed concerts in Canada, U.S., England and Germany.
I also like writing songs, though I don't have as much time for this these days. Here's one I wrote for my group called "Library Boy."
And here's one I wrote about one of my favorite Ray Bradbury short stories, "The Rocket Man." The song is called "Homecoming."
I taught piano lessons part-time for many years, and was also working toward my getting my ARCT diploma (Associate of The Royal Conservatory of Music).
And hey look, I have a song written about me, "Debbie Ohi"!

OK, now we are all officially total slackers and underachievers compared to you. Where can we find you on the internet to find out more about your many projects and talents?

Win a Copy of NAKED
by Michael Ian Black and illustrated by Debbie Ridpath Ohi: