Today we feature the funny and talented Elys Dolan, author and illustrator of the picture books WEASELS and NUTS IN SPACE.

Tell us about your background and how you came to illustrate children’s books.

Originally I did a B.A. in Fine Art. The problem with that was the kind of work being produced in the art world at that time was pickled sharks, flickering strip lights etc. Having always been more of the sort to draw a whimsically moose than put a piles of bricks in a gallery it became apparent that I didn’t fit in.

Once I finished my B.A. I decided a better place for me might be children’s books so I went to study on the M.A. in Children’s Book Illustration at the Cambridge School of Art which is where my picture book career began.

WEASELS was such a fun story (weasels bent on world domination). What inspired you to write it? Did you have a disturbing encounter with weasels as a child?

Ha! I’ve never actually encountered a weasel in the flesh. They’re quite rare, so no disturbing encounters. I had to use ferrets as stand in life models for the book because no weasels were forthcoming.

The idea came from a class project we did whilst I was on the Children’s Book Illustration M.A. We decided to do an ABC book and everyone was randomly assigned a letter to illustrate. I got W which I thought was a terrible letter because nothing fun begins with W. I spend weeks wishing I’d got an S or even an E and failing to come up with anything that began with W. At the very last minute I decided to do ‘W is for Weasels plotting World domination’ and I create an image very similar to one of the pages from the final book to illustrate this. It was that image that made me want to explore the weasel’s dastardly plans further.

WEASELS was your debut picture book. How long did it take (1) to write the story, (2) between submitting it and receiving a call that it would be published, and (3) between the contract was signed and publication? How long did it take to illustrate? Did you have an agent, or how did you get discovered?

I find when I’m making a book the words and the pictures come at the same time so I wrote and illustrated it simultaneously. I’m not one of those people who’ll write out a transcript and then come up with the pictures. That process took me about 3 months but that was moving incredibly quickly because WEASELS was the final project for my masters degree.

There was a good year between finishing the book to it actually getting picked up by my publisher, Nosy Crow, and then just under another year until it was published so it wasn’t a fast process.

I do have a marvellous agent, Frances McKay, who I won in a competition a few years ago and we’ve never looked back since. Together we took WEASELS to Nosy Crow at the Bologna Book Fair one year and they snapped it up.

What is your typical process for doing an illustration?

First I’ll do a thumbnail image for the page I’m illustrating. Thumbnails are tiny little images of all the pages in the book which help you get the sequence and the composition right. I’ll then work up that thumbnail into a full sized pencil rough. I post lots of roughs and other development work on my twitter @ElysDolan and my Facebook page.

Using that rough I’ll trace the image using a light box with coloured pens to create an outline. I then scan the outline into the computer and then there’s a couple of ways I might colour it. Sometimes on a new sheet of paper I’ll lightbox the rough again but instead of tracing an outline I’ll use inks to colour in the gaps. I’ll then scan it in and layer the outline over the top using photoshop. Alternatively I’ll use ink swatches I’d previously scanned into the computer to collage together the ink tone on photoshop and then I layer the outline on top of that.

Tell us about your newest release. What inspired that story?

My latest book is called NUTS IN SPACE which is about a fearless starship crew of furry animals who have been on a mission to retrieve the highly prized Lost Nuts of Legend. Now they’ve got the Nuts on board all they have to do is go home, if only it were that easy. The Star Nav breaks and the crew are forced to go round the galaxy asking for directions home.

NUTS IN SPACE was inspired by my love of sci-fi films, especially Star Wars and Star Trek, along with my own experiences of getting lost on long car journeys. There’s a few characters inspired by real people, for example Commander Moose bears more than a passing resemblance to William Shatner. 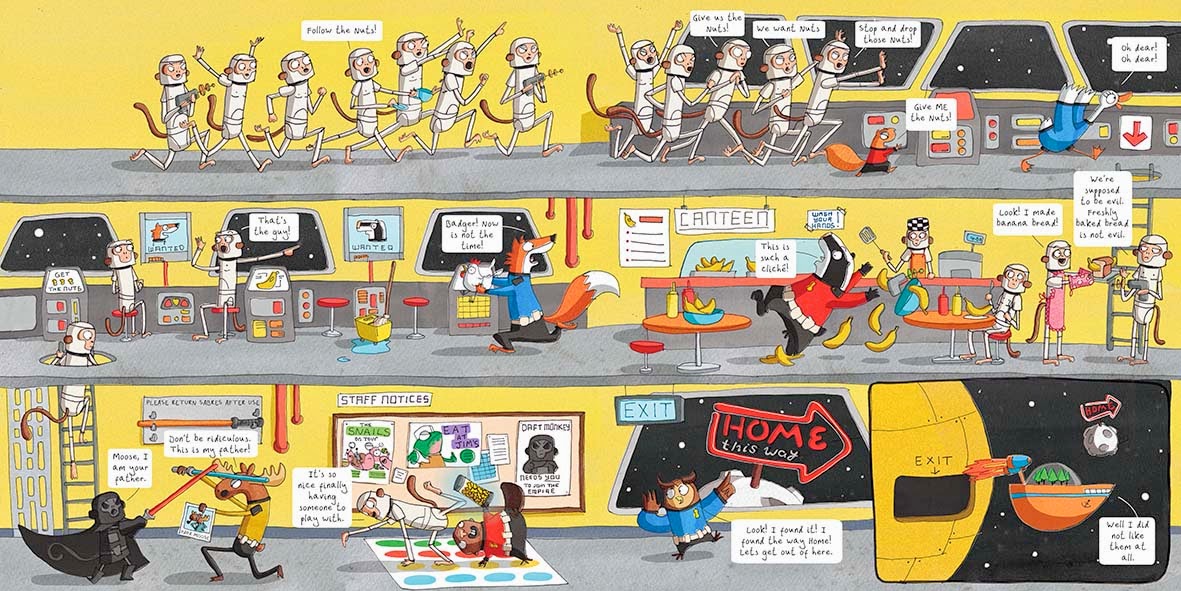 Be persistent and prolific, you can never do enough work. Don’t expect everyone to like your work and be prepared to take a few knocks. If you’re an illustrator always hone your drawing. There’s nothing worse than an illustrator who can’t draw!

I’ve just finished illustrating a book called THE CLOCKWORK DRAGON which is written by Jonathan Emmett. That’s out February 2015. I’ve got a few other projects in the pipeline which are super secret but I can tell you one of them involves phantom cows, Frankenhorse and the mighty Donkula! Make of that what you will.

Tell us one thing most people don’t know about you.

I can fit my fist in my mouth.

Elys is an author and illustrator currently living and working in Cambridge. She works predominantly with ink, newfangled digital witchcraft and coloured pencils of which she is the proud owner of 178 but can never seem to find a sharpener. When not doing pictures and making things up Elys enjoys growing cacti, collecting pocket watches and eating excessive amounts of fondant fancies.

Elys' books Weasels and Nuts in Space are available now.