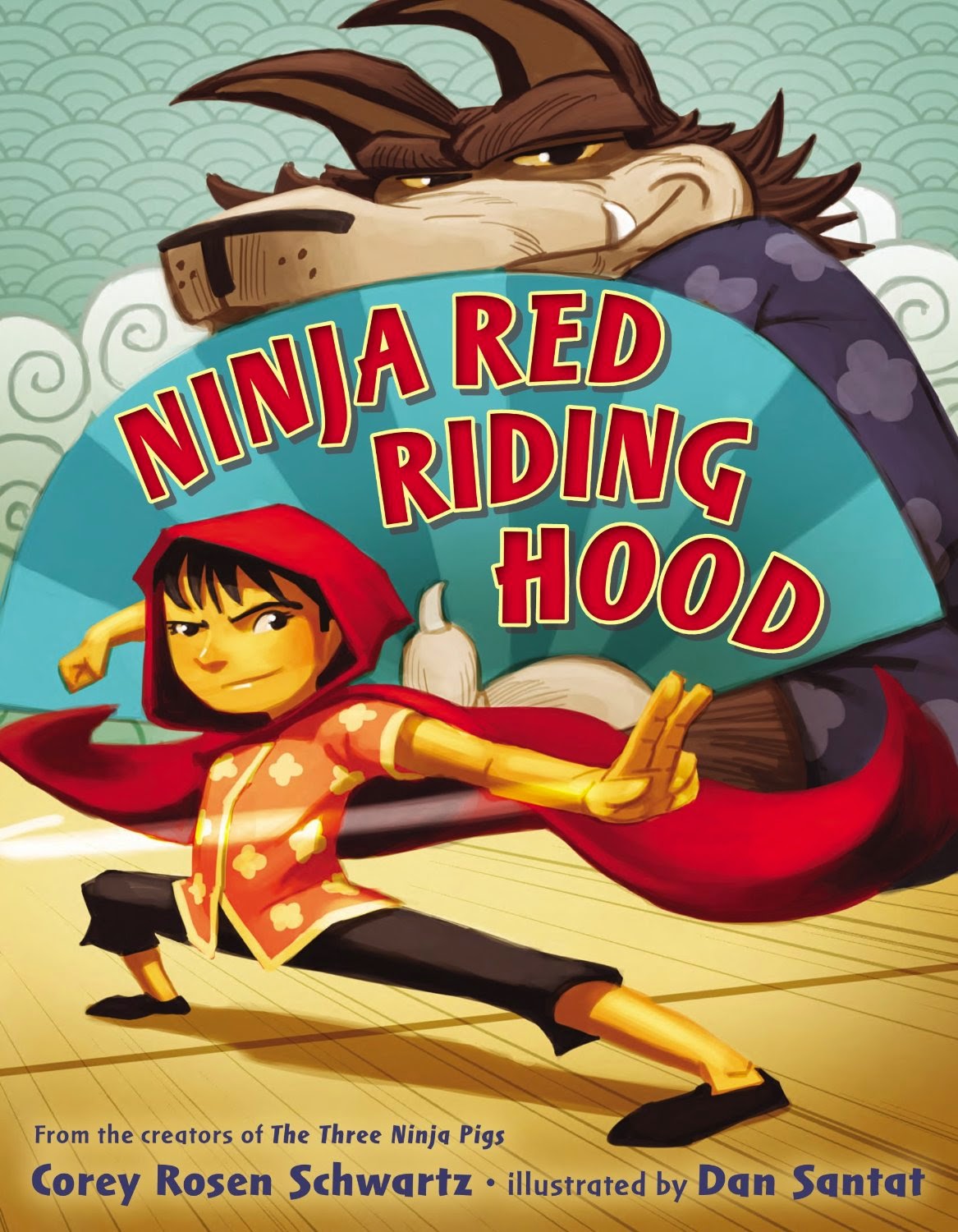 Today we interview author-illustrator Corey Rosen Schwartz, the author of THE THREE NINJA PIGS, NINJA RED RIDING HOOD and GOLDIROCKS AND THE THREE BEARS. Be sure to enter the giveaway at the end of this interview!

As a kid, I was a total bookworm. I naturally assumed I would grow up and write novels like Judy Blume. But by the time I got to college I had sort of forgotten about it.

I took an ASL class and fell completely in love with the language & culture of the deaf community. I decided to get a Masters in Deaf Education and taught at The Lexington School the Deaf in Queens. After a few years, I left teaching to work for a startup where I created kids’ content for the web.

It wasn’t until I got “laid off’ (along with practically the entire company) that the idea of writing books returned to me. By that time, it was clear that picture books were the right genre for me.

Well, my process is a little different from most, because…  I hate working alone! Nearly all my manuscripts are written with a partner. E.M. Forster once said “How will I know what I think until I see what I say?” That’s pretty much me. I NEED to think out loud. And it’s pretty embarrassing talking to myself all day.

So I meet with a partner in a Google Doc. We bounce ideas back and forth in the Google chat box until we have a vague outline of a plot that we are both excited about. Then we start drafting together. 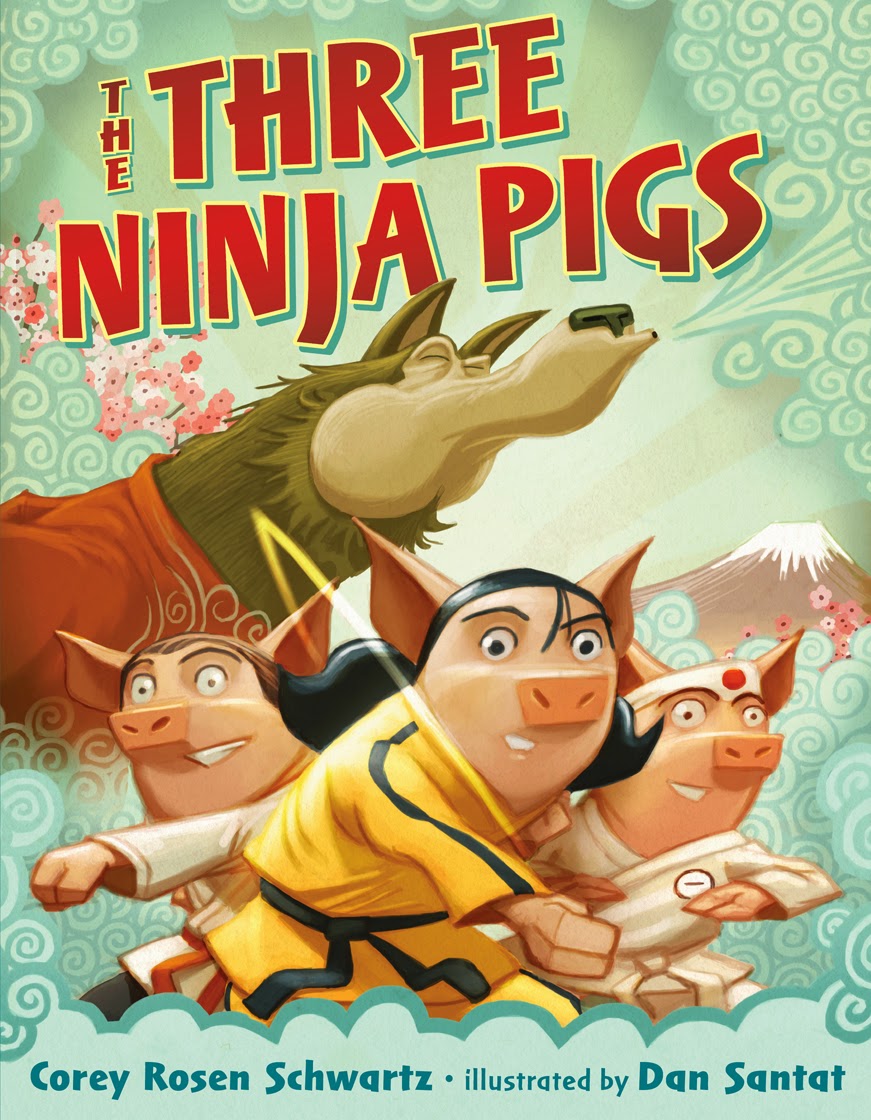 I tend to only work on one thing at a time. Right now, I am working on a truck book! My son was obsessed with trucks as a toddler. I had to read the same truck books to him night after night.     I decided then that I wanted to write one of my own, but I couldn’t seem to come up with a good premise. Then during this year’s PiBoIdMo I got an idea that I think has real potential! So, I am drafting it with my writing partner now. Once we get a finished draft, we’ll spend weeks or even months tinkering with it to get the rhyme and meter just right.

My next picture book is not a fractured fairy tale, for a change!  It’s due out in June 2015 from Simon & Schuster and is called WHAT ABOUT MOOSE? I got the idea from my kids when they were little. My daughter, Jordan, used to be very bossy, especially with her younger brother. One day, when they were about two and three, they were putting supplies away in the art cabinet. My son put some crayons on the shelf, and Jordan looking over his shoulder said, “Not like that, Joshy!”

Josh turned to me with the saddest look on his face and said, ‘I never do anything right.”

And that was the inspiration for the story! 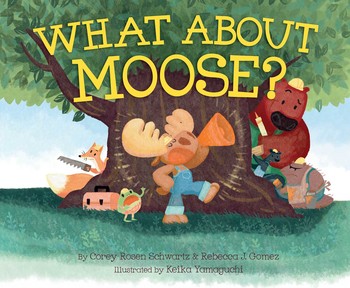 My writing partner, Becky Gomez, and I got right to work. A bossy Moose is building a tree house with friends, but he is so busy ordering everyone around that he doesn’t realize he is getting himself stuck in his own creation!

A lot of people will tell you to be persistent. This is good advice (and Pig Three would wholeheartedly agree with it), but I am going to say something slightly different. Be PROACTIVE. You really have to make your own luck in this industry. Even though I have an agent, I still attend conferences, network with editors. pay for professional critiques, etc.

In fact, the MOOSE story that I mentioned above sold to Emma Ledbetter at Atheneum after I had a one-on-one critique with her at a conference. So get out there! Mix, mingle, and make your own success!

D’oh!  I would have said that I love sign language and used to teach deaf kids, but I already let that cat out of the bag! So, I’ll say… my favorite activity in the world is scuba diving. I have gone on over 300 dives in such destinations as Turks & Caicos, Cozumel, Belize, the Cayman Islands, and the Sinai. 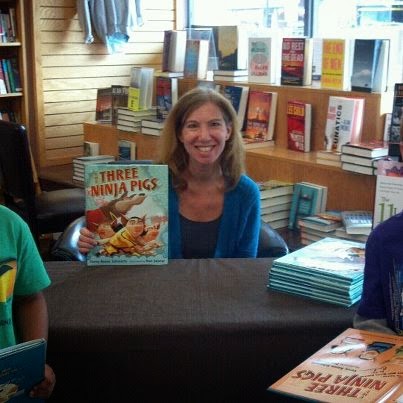 Corey is the author of THE THREE NINJA PIGS (Putnam, 2012) GOLDI ROCKS AND THE THREE BEARS (Putnam, 2014) and NINJA RED RIDING HOOD (Putnam, 2014). Corey has no formal ninja training, but she sure can kick butt in Scrabble. She lives with three Knuckleheads in Warren, NJ.