Today we interview author-illustrator Carol Heyer, who has written/illustrated 28 children's books. Over 2 million of her picture books have been sold.

While I worked for an independent movie production company I also did some freelance work for a few companies. One of them had two black and white cartoon characters that appeared in church bulletins, Hopscotch and Sebastian. This same company asked me if I would be interested in painting samples of these characters for a children’s book they had written. Doing a children’s book was on my bucket list and so I was excited to give it a chance. I did three illustrations. We immediately had three publishers interested, and the rest they say is history!

We did two Hopscotch and Sebastian books, one for Christmas, and one for Easter.

I’m always marketing and at that time I used stickers of my art on all my correspondence. (Now I print them out on my letterhead.)  The Publisher noticed a realistic animal sticker that was on my latest letter and liked it. Until that point they had only seen the cartoon work that I had done. The publisher requested more samples and once she saw them I was immediately asked to do Beauty and the Beast. I did a series of fairy tale books after that, and then other publishers noticed my work and started asking me if I would work on projects with them.  It was a lovely snowball effect!

You have written/illustrated 28 children's books. How have your experience and the industry changed since you first published your books?

Well, when I first started it was an entirely different industry. I think publishers were more approachable and it was a lot easier to sell a project and have it published. Nowadays the amount of books being published has diminished and so have the opportunities to break into children’s books.

That doesn’t mean you can’t get something published, just that you have to be more persistent. You have to believe in what you’re doing and never give up.  Keep sending things out until a door opens!
What is your most recent book and can you tell us about it?

My most recent project is a board book, my first one, titled the FIRST EASTER.  It’s due out in the spring of 2015. 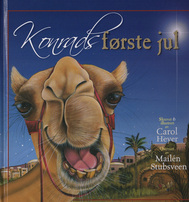 I’m currently developing several new picture book projects, heading back to my “cartoon” beginnings with lively, fun characters that I’m having a blast designing.
You do a variety of art in addition to children's books. How do you balance your projects? What are you working on these days?

I love working on various projects, in different genres, at the same time. I always have. When I get bogged down on an illustration, which happens to me all the time, and it just isn’t working then I jump to another project. When I come back to the problem painting with a fresh eye, I can usually work out what was bothering me and then complete the image. I have two easels; sometimes three going all the time in my studios and leave them set up with a painting in progress. Then all I have to do is roll my taboret around and start work on the other piece.


I think this approach keeps my art fresher. I do the same thing when I write, with at least a half dozen stories, from picture books to YA, in progress at the same time.

I’m currently working on an “Alice in Wonderland” illustration for the Mazza Children’s Museum, and a fantasy series of Urban Wizards.

What are the one or two things you did that have most furthered your children's writing & illustrating career?

Researching publishers before I do mailings to make sure my style will work with their existing line, but most important of all, setting up a schedule of regular mailings and updates. This keeps your new work in front of the art directors and reminds them that you’re available for assignments.

I mentioned about being persistent. I think that’s the single most important thing you have to be.  There are a lot of talented people out there that are not published, and not creating anymore, because they couldn’t take the rejections, or just gave up too soon.

Never stop honing your craft. Keep learning, painting, stretching and sending out samples. Sometimes you feel like you’re being ignored, but I always remember a letter I got from a mystery novel publisher that said, “We’ve just received your latest sample and like it very much. Thank you for your persistence, we would like to offer you a cover assignment.” Ever since I got that letter I’ve always told everyone, that my middle name was “Persistence.”

Another time I’d been mailing to a publisher for over a year with no response. I was just about to take them off my mailing list when they contacted me and offered me a two-book assignment. The art director said that she had a thick file filled with my images that she was able to take to the table and present. So, you just never know.

I love animals! I have two rescue Chihuahua mixes that I spoil rotten. Cashew Nut and Peanut. Since I am nutty too, friends have told me that I am now one of the Mixed Nuts, and also that my home is officially The Nut House.

Also, I’m a decorating diva and like to collect African and Asian antiques. I also love gardening.

My website is http://www.carolheyer.com.  It has a mix of my fantasy and children’s art.

CAROL HEYER is a full time illustrator and writer. Before beginning her freelance career Heyer worked for a movie production company as production designer and writer of feature films, including Thunder Run, and May Day.

Heyer has written/illustrated twenty-eight children’s books. To date well over two million of her picture books have been sold.

Heyer's art has appeared on everything from book covers to bookmarks.  She has done work for DISNEY, WIZARDS OF THE COAST, READER’S DIGEST, RAY BRADBURY, SCHOLASTIC, PENGUIN PUTNAM/Henry Winkler, and many others.