Be sure to enter the giveaway for a signed copy of BAD KITTY: DRAWN TO TROUBLE at the end of this interview! This is also the beginning of our Kidlit 411 Birthday Giveaway Bash that will continue next week.

How did you come up with the idea for BAD KITTY?

My original inspiration for Bad Kitty came very simply. I thought of the title first. I do that a lot. I often begin contemplating story ideas by coming up with the title first. So, one day around twelve years ago, I was sitting in my room at my desk contemplating unusual titles. The words “Bad Kitty” came to me and I began pondering what a cat could do that would be so “bad.” So many ideas came flooding in that I thought it might be an interesting exercise if I put them into alphabetical order. And that was it.  “Bad Kitty” – actually, the entire Bad Kitty empire was born from a single moment when I was contemplating those two little words.

How do you keep a great series like BAD KITTY fresh and interesting? Where did you get the idea for Puppy and Uncle Murray?

I get bored easily. Meaning, that I do not relish the idea of reworking the same character in a different book with the same plot but a different setting. Stories and plots are two very different things, and I think that a book series can often run the risk of conflating those two things.

The temptation is great to write the kind series where Kitty does nothing but freak out constantly over the simplest things. BAD KITTY GETS A BATH remains the most popular of all the chapter books, possibly because it’s the first, but possibly also because it is the simplest in concepts. I could very easily make that same book but with slightly different situations over and over again. Kitty has to go to the doctor, but doesn’t want to. Kitty has to go to bed, but doesn’t want to. Kitty has to do her homework, but doesn’t want to.  he stories would be different, but the plots would be the same, and not only would I grow terribly bored very quickly, but Kitty would quickly become a very two-dimensional character.

So, the challenge I face with every book is to go far out of my way to keep Kitty consistent as a character while creating stories very different from each other. I confess that it’s getting harder and harder. I feel like I cheated a bit when I created BAD KITTY: DRAWN TO TROUBLE when I made a book that’s a story about how to make a story. But the result pleased me greatly. It may be the best of all the Bad Kitty books.

As for Puppy and Uncle Murray, they both manifested in the original BAD KITTY picture book.  Puppy was born of my need to end the book in a way to satisfy myself. I could have ended the book with “And now she was a very, very, good, good, good Kitty.  The End. But that would not have been satisfying at all. I wanted to make her BAD again, but without using food as a source now that she had all the food she wanted. Adding a dog seemed like the right thing to do, and I’m very happy that I did. Even though Puppy doesn’t always have a lot to do in a Bad Kitty book, he is deeply important. Puppy helps to define who Kitty is as her foil.  And that’s why, aside from Kitty herself, Puppy is the only other character who appears in every Bad Kitty book so far in print.

Uncle Murray was born because I couldn’t think of either a food or an animal (aside from the nonexistent unicorn) that began with the letter “U.” I thought it would be a cute gag if I used “Uncle Somebody” as a nice surprise inside that alphabet of animals. And if I was going to use anybody, I decided to depict my own Uncle Murray who I remember very well from when I was a kid.


How long does it take you to write and illustrate a BAD KITTY book?

It used to take me roughly nine months to write and draw one of those books, either picture book or chapter book. But over time, I been able to reduce that time to about six months now that I’m more confident with my own storytelling and with the characters themselves.

What are some of the tools you use to create the illustrations for BAD KITTY? Can you tell us about your technique?

Think of an old animation cel, back in the day when animators actually used those things. Someone would paint a background, usually in water colors. And then someone else would paint directly onto a clear acetate cel with a different kind of watercolor called gouache, which was both opaque and painted flat so that the colors would remain consistent from cel to cel. This is much like what I do.

I draw with good ol’ fashioned pen and ink and then paint the line art with watercolor and gouache.  But the point here is that I paint all of the background features with watercolor and all of the foreground characters with gouache. I don’t use an acetate cel, but the effect is the same: because Kitty is so very black and opaque she stands out from everything else around her.

What comes first for you, the drawings or the story?

Well, first comes an outline which I type out on the computer. Once I’m satisfied with it and my marvelous editor Neal Porter approves it, I begin fleshing out the story by hand on paper. But drawings and stories are not mutually exclusive things to me.

I would argue that in most children’s books, but certainly in mine, the drawings tell the story just as much as the words do. So when I have those sheets of paper in front of me, I write and sketch the story out simultaneously. This is especially important for me because I have a character in Kitty who does not talk, and because she does not talk I need to sketch out her facial expressions and reactions to the words being spoken to her.

If you could offer one piece of advice to author/illustrators trying to get published, what would it be?

I’m going though this with my wife right now because she is trying very hard to create and hopefully have published a picture book.  The first one she tried out last year didn’t work out.

And as clichéd as it sounds, you really do have to tell yourself to never give up.  I first tried to publish stories as much as 20 years ago, but they were awful. At the time I thought they were brilliant. And today in hindsight I can see that they were crap. Merde. Guano.

But then I found myself working in a children’s bookstore where much of my daily mission required that I learn the inventory as well as possible. Reading and researching were practically the same thing for me back then, and I doubt I would be where I am today if I hadn’t researched so much. So anyone and everyone who wants to be a part of this industry or even is already a part of this industry needs to read as many children’s books as possible to make the kind of book that will be published.

What is something about you that most people don’t know?

People who know me personally already know this about me, but people who do not might be surprised to know that I am half Chinese. My full name is Nicholas Tung Ming Bruel. My middle name is a Westernized version of the Chinese name my mother gave me that roughly translates to “The Sun Is Rising.”

I don’t think that I express my cultural heritage much in my books, if at all. There is little that is “Chinese” about my work. The closest I come to my heritage can be observed in my newest book, A WONDERFUL YEAR. It’s not obvious from looking at the girl featured in this book, but she is Asian. Once you know this, then it becomes obvious. But my intention from the start was to keep her complexion purposefully vague, so I think you can make the same argument that she is Caucasion or Hispanic. It’s worth noting, perhaps, that the girl in this book was inspired by my daughter Izzy, and my daughter happens to be Vietnamese. 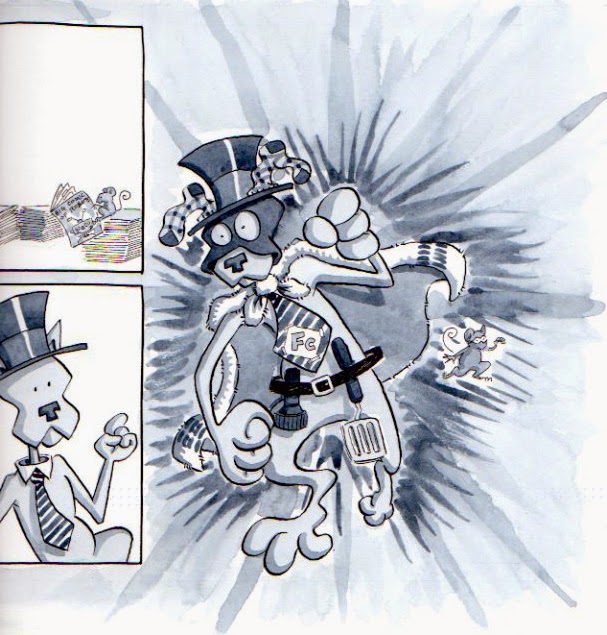 Nick is a freelance illustrator and cartoonist residing in bucolic Tarrytown, NY with his lovely wife Carina and their lovely cat Esmerelda. He has an office in New York City.

During his down time, he collects PEZ dispensers and grows tomatoes in the backyard.

He is always open to making appearances in stores, schools and/or libraries.