I always wanted to be an illustrator but as a young person I didn’t give any thought to actually planning for my future. Shortly after high school, by chance I landed a job dressing mannequins at Sears because I had scored points in the “creativity” category on their job application. I was reprimanded regularly for taking things just a little “too far”…cutting up the wigs, dressing the dolls outside the constraints of the “Sears image”…and I drove my superior crazy in this regard; but it was this job to which I can attribute my career choices. I learned that I would not be happy working in anything other than a creative role. I studied graphic design and illustration in college but I lacked confidence in my abilities as an illustrator and pursued graphic design out of school rather than illustration.

The desire to be an illustrator never left me though, in spite of countless attempts at distracting myself, including starting a wonderful family with now 10-year old twins and running a successful freelance graphic design business. Ultimately I discovered that I would spend my life pursuing illustration or wishing I had and being (in a nutshell) unfulfilled in that regard.

Fast forward a few years of extension and online classes, a slow but steady effort to build up a portfolio of illustration work, and a refusal to give up, and I have started calling my graphic design work my “temporary job”! I am as yet unpublished but I also see this as temporary.

Why children’s illustration in particular? The joy of telling a story in pictures for children is magical. Great illustrators make it look effortless! I want to bring that sense of joy to children, and magic to my pictures as well.
You do a variety of design and illustration work. Do these different styles and types of work influence each other?

First, having the ability to think conceptually – beyond the literal image to communicate an idea – is a skill that I have developed as a designer; and although I can’t point to a particular sample in my current work, I really enjoy the work of illustrators who do this successfully (such as GrisGrimly and Scott Fischer among many others), and I anticipate taking my work in this direction as well.

Additionally, the “tools of the trade” as a designer are priceless in illustration work these days. I could not imagine having to learn Photoshop now – it’s complicated! I’ve been using Photoshop for years so when I started painting digitally it was a far less painful process than if I were also having to learn the software. The other tools that I use everyday – scanners, page layout software, etc.; as well as knowledge of printing processes and digital/web all direct my work to some degree, and save a lot of time too.

Can you tell us about how you approach an illustration and what your process is?

I tend to approach both my illustration and design projects in the same way, although the methods and products are obviously different. 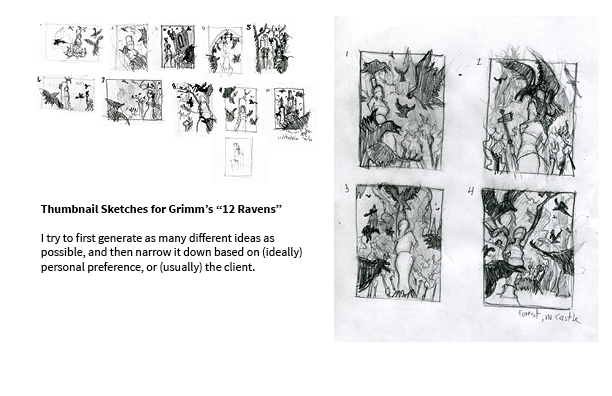 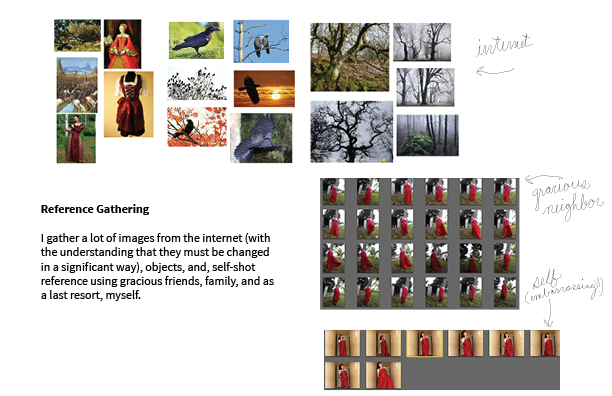 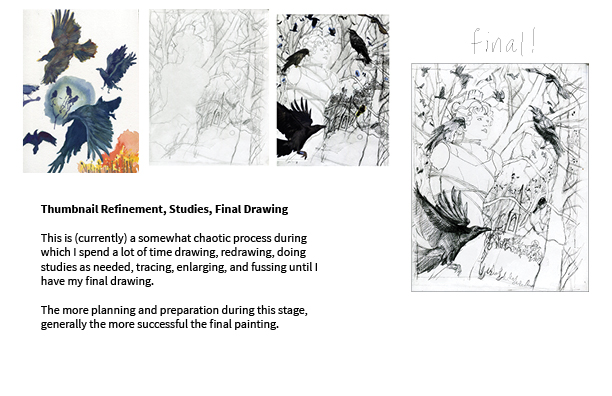 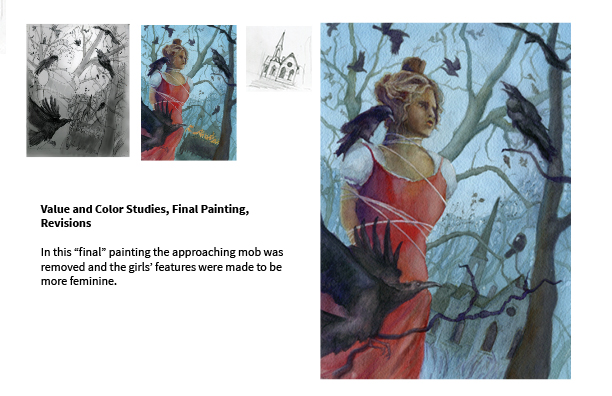 What projects are you working on these days?

I recently listened to a podcast by Chris Oatley, an animator at Disney and esteemed teacher of many up-and-coming illustrators, who said, “Projects are the new resume.” This was heartening to me because I do have several of my own projects in the works.

I am currently creating a series of illustrations for characters that I have developed. I don’t consider myself a writer, but there is a bit of a story behind each one; and I hope that ultimately they will make good portfolio pieces in series. I also have a picture book dummy in the works – definitely a project that I’m doing for the sake of having a project, although I can’t imagine that I won’t submit it when I finish.

I’m also lucky to have a steady flow of design work that helps pay the bills and gives me a reason to get out of my pajamas. Graphic design as a trade sort of “straddles” the corporate and creative realms and for me it’s good to start the day in a professional mode – I am communicating with all sorts of people during the day, and I enjoy this break from the sometimes lonely atmosphere of mid-project illustrations.

What are the 1 or 2 things that you have done that have most advanced your illustration career to date?

First and foremost, actually working on projects (when I don’t have a paid project) is the biggest thing. Staying in touch with being a working artist keeps me fresh and it fuels inspiration (as well as frustration, mania, sleepless nights…).

The second biggest thing is networking. For several years most of my work – design and illustration – has been awarded via networking and “word of mouth.”  In addition to getting work, networking has been a great means to stay connected to a community of other artists in an otherwise lonely work environment. I work from home but I thrive on social interaction so it’s important for me to connect with people to help stay inspired.


There is a third that I can’t ignore - taking ongoing classes both in illustration and in specific mediums has helped me to improve my skills. This is a constant for me – the more I learn, the more I am aware of how much I need to keep improving.

I have a golden retriever that I take hiking regularly – it’s during those walks that I often work through my projects (“ruminate”), find solutions, and generate new ideas. Communicating with other artists and sharing work and ideas is refreshing; sometimes looking at illustration work of others (although this can have the opposite effect as well sometimes); and of course my kids inspire me to be the best person I can be, both in my art and in my life. That is a tall order.

I’m ambidextrous. I paint left handed when I’m sitting down but I use my right hand when I paint standing up.

A graphic designer-turned-illustrator, Jami Butler is thrilled to be pursuing illustration full time. Following her dream of being an illustrator has been a most daunting, but fulfilling pursuit, and she feels incredibly lucky to be able to do so.