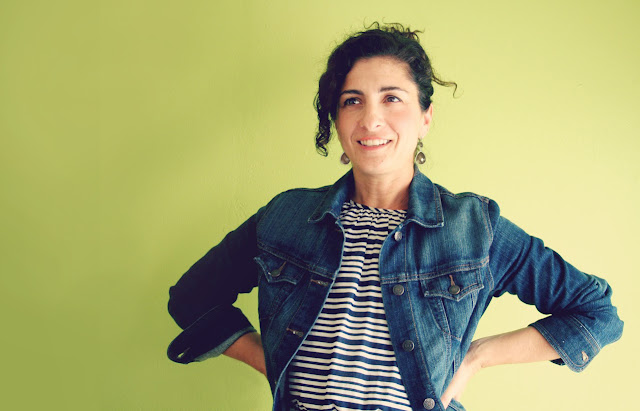 Today we are pleased to feature author Dev Petty and her debut (very funny) picture book, I DON'T WANT TO BE A FROG.

Though my degree is in political science, I ended up as a senior visual effects artist for many years. I worked on dozens of movies including the Matrix films along with commercials and games. I really, REALLY loved my career and it was a huge part of who I was, but it was sort of unmanageable when I had kids and wanted to ever see them (or even remember their names)...visual effects requires a lot of hours. So, to be honest, I was somewhat adrift.  My freelance business was decimated when the economy crashed and I was lost. A pal suggested I attend a personal essay class she had taken and I did. I really enjoyed writing and personal essay is seriously the cheapest therapy you'll ever have.

Once I was writing a little, I had a story idea and wrote it down and it turned out to be sort of a picture book, though I'd never really thought about writing for kids. But I really loved the experience and I felt like it blended my weird point of view and sense of humor and my knowledge of film with its focus on timing and art. It all just sort of fit. I started writing a lot of stories and experimenting. I went to some conferences and read a lot and then in an act of hubris? Lunacy? Silliness?

I started submitting to agents, which I really had no business doing at all. At first they all passed, but from the get go I got a lot of personal responses and people saying sort of “No, but you've got something going on here that's interesting.” That there was enough for me to keep at it and I kept experimenting and submitting and pretty soon an agent got ahold of Frog and some others, made an offer and got me a deal.  By then I'd totally fallen in love with picture book writing and I was off and running creatively.


Could you tell us a little bit about your PB I DON’T WANT TO BE A FROG?

I DON'T WANT TO BE A FROG is a funny picture book told all in dialogue which follows a young frog as he wrestles with wanting to be something other than he is. Basically, he doesn't want to be a frog, so this book is kind of about it being ok to explore the idea of being something other than what you are and then how you can find out the thing you don't like about yourself is actually a great thing. I enjoy books which tackle serious subjects and existential crises in a way that isn't too heavy.


How did you get the inspiration for this book?

Mostly, I just wanted to write a funny book with a frog that was all in dialogue. Originally, he just wanted to be various different animals, but along the way it became more about wanting to be something other than what you are and the coming to terms with that, about finding the bright side.

The followup to I DON'T WANT TO BE A FROG is coming out in the Fall of 2016. Mike Boldt is on board to illustrate again, this time in I DON'T WANT TO BE BIG.  This story follows the same character as he struggles with growing larger and older and the good and bad parts of both. This story started as a wink to my youngest who is very petite and kind of likes that we all carry her around all the time. It's got the same dry humor and I expect amazing illustrations too.

2017 will be super exciting because my collaboration with my pal Lauren Eldridge will come out with Little Brown. Tentatively called CLAYMATES, this book is like psychedelic Sesame Street.  Lauren is a photographic illustrator who worked in clay for this one and it's a hilarious, wild ride about two crazy balls of clay.  I'm super proud and excited about it.

I tend to think a lot more than write. I let ideas steep a long time before I ever put pen to paper and then I experiment with voice, point of view and other things before I settle on something. I throw a lot away.

Once I have an idea, I write tons of notes and sit on my deck thinking about it until I really feel like I've looked at the idea from many angles and then I start to “hear” the story in my head. I try to do this sort of thing as long as possible because once I write the actual story it's too easy for me to get mired in word choices and little things and forget about the big idea I'm getting at.


How do you leave room for an illustrator, did you have illustration notes on this ms?

That's a good question! I did have some illustration notes on this ms but not a ton. In fact, I had so few that Mike Boldt put in the father character...I'd never written that, the young frog just was talking to different animals directly! But the father added a nice layer of nuance to the whole thing so I'm grateful I didn't direct too much.

I leave as much room for the illustrator as I can. They are really good at understanding what the action is and unless I have a super defined image, I'm content to let them do their thing. I think agents and editors are also well schooled in reading picture books without too much help. With that all said, I try to be myself in how I put together my stories.

If something is important and I see it a certain way, I put that down as an illustration note, especially if it's a story point of some sort and critical to understanding it. I put alternate endings too if I'm not sure which is better and most readers have always appreciated that. Once in a while, I will sketch out a dummy and submit that but usually only in otherwise difficult to understand books.

Well, first I'd suggest that you read more than you write.  Hit the library and check out every single thing that speaks to you. I have my own list of authors that I really connect with and while I don't want to emulate their style, reading a giant stack of great picture books by great authors will help you see what they're doing and what you like about it.

I suggest kind of learning the basic rules and paying attention to them...for a while...then you can really start breaking them.  I also think it's so important to really think about your idea before you start writing. Take notes, draw stick figures, really think. Try the opening in different points of view and tenses...can it be wordless or backwards or what? At a certain point in doing this, I always feel this big shift when I've found the right thing.

I think you should always be able to answer the question “What is this story about?” without using your character's name. Meaning, the answer should be friendship or loss or bravery and not “A cat named Nelly finding yarn.” (Not to disparage any cat with ball of yarn stories).

Finally, I really have to urge people to take risks. Yes, there are some traditional and sort of benign, middle of the road books out there.  But a lot of the big books (PRESS HERE, THE DAY THE CRAYONS QUIT, I WANT MY HAT BACK, etc.) are bold, daring and unusual. You kind of have nothing to lose when you're brave in your writing and so if you have a wild idea, let it be wild and different. Be yourself.

Oh, you can find me at my Website www.devpetty.com, though I'm terrible about updating it.  Mostly I'm on Twitter (@devpetty).

Twitter is great for writers and I've made amazing connections with amazing writers there.

Hmmmm. I used to answer this by relaying how I was on the Bay Bridge in the 1989 quake when it broke, but I've talked about that so much that everyone knows it. I guess, to keep to the writing theme, I'd say I've had a kind of strange and colorful and weird and serendipitus life so far and it certainly informs my writing. The world is a funny, messy place and I like that to show up in my writing and I share that notion with my kids too. There are so many unanswered questions and odd things out there and it's so darn fun not knowing everything and just finding out.

That may be too rhetorical, so on the chance you're looking for factoids, I'll throw these in: I love Cheezits, married my highschool sweetheart, grew up in Berkeley in the 70s (that's a whole book unto itself), I'm great at word jumbles, got to try on the boots Carrie Anne Moss wore as Trinity in The Matrix, am profoundly competitive and I volunteer at the local animal shelter.

Dev Petty is the debut author of I Don't Want to be a Frog and has two other books coming out in 2016 and 2017.  As a former visual effects artist in film she worked on The Matrix trilogy along with dozens of other films and commercials.  She grew up and resides in Berkeley, California with her husband, daughters and critters.  She's represented by Jennifer Rofé of the Andrea Brown Literary Agency.