Welcome to Day 1 of the Kidlit411 Birthday Bash, celebrating our second birthday! We are so happy to have you are here with us that we are giving YOU presents!

How does it work?

We are doing four days of giveaways to share our excitement about the kid lit industry. All of the prizes are generously donated so please thank the authors, illustrators, and agents when you see them around the web.

Here is the lineup:

Each prize will have its own Rafflecopter widget. You may enter into any and all of the giveaways. Taking an action once (like commenting) qualifies you for all of this day's giveaways.

TODAY'S GIVEAWAYS: ALL ABOUT BOOKS

PRIZE 2:  A JANE YOLEN PACK: OWL MOON, HOW DO DINOSAURS SAY GOODNIGHT? and YOU NEST HERE WITH ME signed by authors Jane Yolen and Heidi Y. Stemple.

PRIZE 3:  THE NEWBERY AND CALDECOTT WINNERS
2016  Get a copy of the JUST ANNOUNCED winners of the Newberry and Caldecott Awards! (not signed, donated by Kidlit411):

2016 is a great year for picture book debuts! On the Scene in 2016 is a group of debut authors and illustrators and they will give one lucky winner a year’s worth of debuts (23 books!). Most will be signed by either the author or the illustrator. This prize is limited to U.S. addresses: 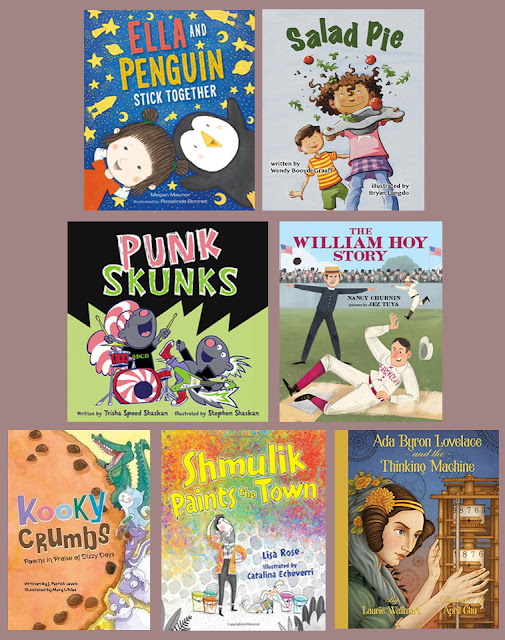 ELLA AND PENGUIN STICK TOGETHER by Megan Maynor, illustrated by Rosalinde Bonnet (HarperCollins Children's Books, Jan 2016) Ella and Penguin want to see their new glow-in-the-dark stickers glow, but the dark is so…*dark.*

by Lisa Rose, illustrated by Catalina Echeverri (Kar-Ben Publishing Spring 2016) The town artist needs to paint a mural for Israeli Independence Day.  He can’t decide what to paint--luckily he gets some help from an expected source--his dog!

THE WILLIAM HOY STORY: HOW A DEAF BASEBALLPLAYER CHANGED THE GAME, written by Nancy Churnin, illustrated by Jez Tuya (Albert Whitman & Company). The true story of William Hoy, one of the first deaf major league baseball players, who taught umpires and teammates the signs we use today so that he could pay the game he loved. 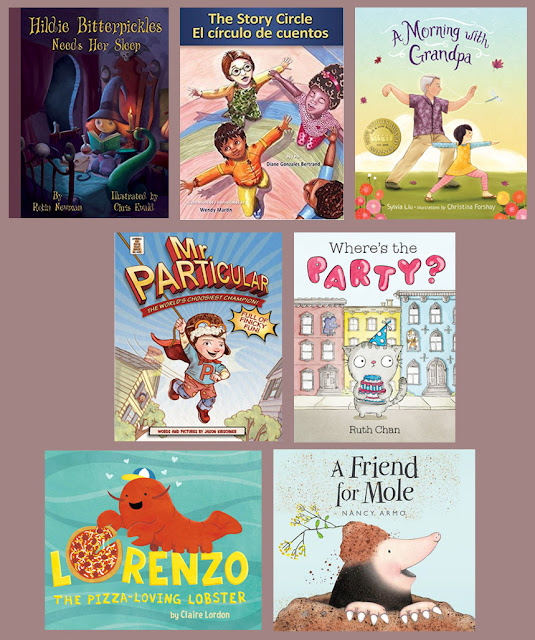 HILDIE BITTERPICKLES NEEDS HER SLEEP, written by Robin Newman and illustrated by Chris Ewald (Creston Books, Spring 2016). What does a witch have to do to get a good night’s sleep when her quiet neighborhood has been turned upside down with the sudden arrival of the old woman in the shoe, big bad wolf, and other noisy fairy tale characters?

A FRIEND FOR MOLE, written and illustrated by Nancy Armo (Peachtree Publishers, April 2016) When mole becomes lost the world suddenly feels strange and frightening until he discovers he is not alone.

A MORNING WITH GRANDPA, written by Sylvia Liu, illustrated by Christina Forshay (Lee & Low Books, May 2016) Gong Gong and Mei Mei teach each other tai chi and yoga with mixed results.

MR. PARTICULAR: THE WORLD’S CHOOSIEST CHAMPION, written and illustrated by Jason Kirschner (Sterling, May 2016) Mr. Particular is super picky, but when his friends in the “Super-Duper Group” finally get fed up with his fussiness, can Mr. Particular prove that even the super-squeamish can save the day?

WHERE'S THE PARTY? Written and Illustrated by Ruth Chan (Roaring Brook Press, April 2016). Georgie the cat loves throwing parties for his friends, but when he tries to invite them, they're all too busy to come. Will there still be a party?

LORENZO, THE PIZZA-LOVING LOBSTER, written and illustrated by Claire Lordon (Little Bee Books, May 2016). Lorenzo the lobster and his sea turtle friend Kalena decide to make pizza - but Lorenzo can't remember the ingredients!

YOU'RE MY BOO, written by Kate Dopirak and illustrated by Lesley Breen Withrow (Beach Lane Books/Simon&Schuster, Aug. 30, 2016). Hey, Little Boo! You know what's true? Whether you're sweet or stinky or happy or blue. . .your mama and daddy will always love you!

CITY SHAPES by Diana Murray, illustrated by Bryan Collier (Little, Brown, June 2016) A young girl walks through the bustling city, while a pigeon flies above, both spotting hidden shapes at every turn.

GRIMELDA THE VERY MESSY WITCH by Diana Murray, illustrated by Heather Ross (Katherine Tegen Books/ HarperCollins, July 2016) Grimelda is a witch who insists that "messed is best," but when she loses an ingredient for making pickle pie, she embarks on a frenzied search to find it--no matter what.

NED THE KNITTING PIRATE by Diana Murray, illustrated by Leslie Lammle (Roaring Brook Press/Macmillan, August 2016):
Ned's fondness for knitting annoys his captain, but when a sea monster attacks the ship, it's Ned's knitting that saves the day. 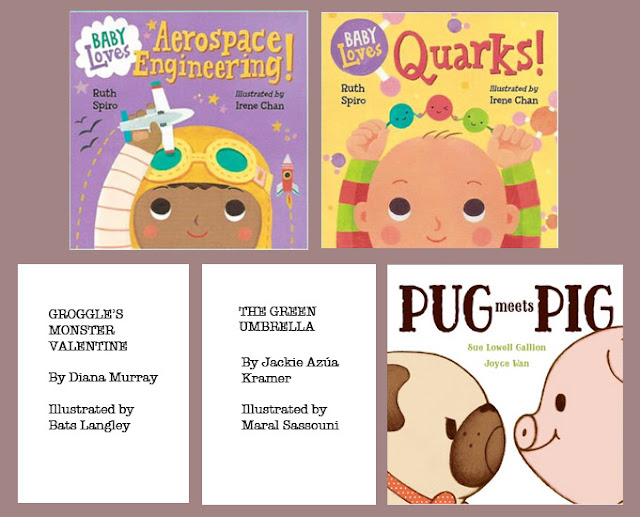 THE GREEN UMBRELLA written by Jackie Azúa Kramer, illustrated by Maral Sassouni (North South Books, September 2016). Things aren’t always what they seem when Elephant takes a walk with his green umbrella and he's interrupted by a cast of characters each claiming that his umbrella is really theirs.

GROGGLE'S MONSTER VALENTINE by Diana Murray, illustrated by Bats Langley (Sky Pony Press, Fall 2016) Groggle wants to make the perfect valentine for Snarlina, his "beast friend" in the world, but can he control his "monster appetite"?

PUG MEETS PIG, written by Sue Lowell Gallion and illustrated by Joyce Wan (Beach Lane Books/Simon & Schuster, Sept. 27, 2016). A pug's happy home life disappears when someone new moves in in this story of an unlikely friendship.

BABY LOVES QUARKS, by Ruth Spiro, illustrated by Irene Chan (Charlesbridge Publishing, Oct. 2016) Growing a scientist is easy when you explore the basics of particle physics and tie it to a child's world.