Today we feature the talented illustrator Sansu, who works as a lighting artist at Pixar Animation Studios. Be sure to enter her giveaway of 3 copies of PART OF MY HEART.

Miyazaki Hayao's "My neighbor Totoro" was my big influence when I was young. I told myself that I want to make something like that. I wanted to study film making. However, I thought film making was for special people like movie stars and Hollywood film directors. My dream seemed too big at that time. So I went to an art school and studied printmaking which I loved as well.

I came to the United States to pursue my dream and studied animation at the School of the Art Institute of Chicago. I have been working at Pixar Animation Studios since I graduated. The first few years, I was busy working on movies like Finding Nemo and Monsters Inc. Soon I realized that I wanted to create something of my own even if it was very personal. I created my own stories and drew after work. Illustrating for children gives me freedom to explore my dreams and imaginations.

Your style is so fresh and fun, and I love Miyazaki Hayao too. What are your other influences?

My influences change day to day. Sometimes it's music, film, or even my depression inspires me. When I create something, I feel alive and happy.

Recently, my 13-month old baby has been my big influence on my art. I see the world through his sparkling tiny eyes and now the world is not the same as before. The taste of orange and the moon in the dark and the sound of vacuum cleaners are fascinating to me these days.

My favorite picture book artist is Anne Herbauts. Every time I read her books, I don't want to turn pages because each page is so lyrical and I want to make sure I spend enough time to enjoy her words and images. Her imagination is magical and the world is original. I read her books in Korean because Herbaut's books are not popular and hard to get in the United States.


You work at Pixar. Tell us about what you do there. Does it influence your illustration work?

I work as a lighting artist. I lightt animated characters and sets in a 3D computer world.  We have had many visiting artists at work like Miyazaki Hayao, my child hood hero. We just had Mo Willems  and he was really fun and creative. I am more in love with their work after I meet them. While I am influenced by many creative talented people at work,  I try not to get influenced by too much from the Pixar style since I am trying to find my own vision and true voice.

Do you have any books published? What projects are you working on now?

I have a self-published book called PART OF MY HEART.  Author Mike Sundy and I met in Lissa Rovetch's class and we created the free e-book. The ebook has been downloaded 22,000 times and we have about 800 five-star reviews in iTunes. Now the paperback is selling on Amazon.

I didn't know about self-publishing until now and I realize that it has lots of possibilities.  If you are waiting to be picked up by a publisher, self publishing could be another good option. Your book will never be run out of printing as long as you want, and will be read by people all over the world.


Now I am working on several stories. Here are few images of them.


Can you describe your illustration process?

I draw most of drawings with Graphic App on my iPad these days. I wish I had more time to paint and draw on paper. It gets easily interrupted with my baby. I would love to get any tips to work on art with a toddler.

Here is my working progress for my next project, "Monster called Fever."  I am trying to use layers as color plates. It is a similar process of printmaking. I use blue as background, dark grey for shadow, orange and white color for highlights. At the end, I added little texture to the image to make it feel like hand printed.

Here is another working process of my water color painting. I usually starts from idea and sketch and paint. I carry a small sketch book and an iPad in my bag, so I can paint whenever I have a moment.

You have studied art in both Korea and the United States. Are there differences in the way art is taught in each country?

I learned that finding an individual artist's voice is important when I studied at The School of Art Institute of Chicago. We didn't have grading system. It was either pass or fail.  I believe that it is hard to judge art. Many great artists were judged mistakenly and treated poorly until the next generation recognized their works in art history. At the school, our teachers were not allowed to come to the final critique. We invited local artists or other department teachers to critique with their fresh eyes. I thought it was very cool.

What advice would you give to other illustrators?

Draw everyday.
Everyday matters. I tried to do  little quick 5 minute sketch everyday when I don't have time and pat my shoulder.

Try not to draw to win  competition, to get in a festival, or please  your teacher. Don't follow money or fame. Let them follow you or don't even care about them. Be yourself and find your true voice and enjoy while you are doing it.

I love music but I am bad with rhythm and I have stage fright. My fingers shake and I can't breathe well when I am on stage. I would like to overcome this someday. 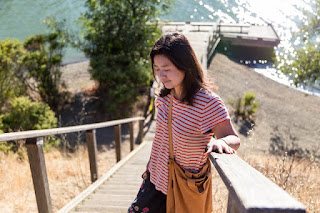 Sungyeon Joh is a children’s book writer, illustrator and animator living in the San Francisco Bay Area. She is also known as Sansu (which means “mountain water” in Korean).

Sansu studied printmaking at Hongik University in Korea and animation at the Art Institute of Chicago. Currently, she is working as a lighting artist at Pixar Animation Studios.

Susu's stories express her love for life and they also explore the mystery and magic of nature. She also enjoys playing guitar and walking with her husband and son on Sunday morning.