Today we feature Liz Wong, who debuts as an author-illustrator with her picture book, QUACKERS (Knopf Books for Young Readers), which comes out in March 2016. 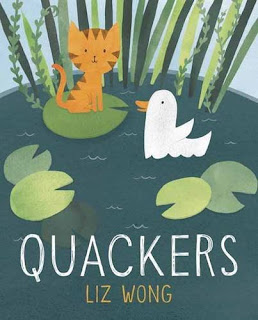 Tell us about your background and how you came to writing and illustrating for children.

When I was in elementary school, I decided that I wanted to be an artist when I grew up. Despite this early conviction, it took a long time for me to discover that I wanted to be an illustrator. I studied Ceramics and Anthropology in college and made sculpture and crafty items for years until I finally stumbled upon a children’s illustration program and realized that picture books were the perfect fit for me. Along the way I started writing as well. It took another ten years of learning and creating (and having a child in the middle of it all) before getting published.

Congrats on your debut PB, QUACKERS. Tell us about it and what inspired it.

QUACKERS is about a cat who thinks he’s a duck. After all, he lives at the duck pond with all the other ducks and everyone else he knows is a duck. Then one day, he meets...Mittens.
The idea for QUACKERS started out when I drew a picture of a cat and thought, “Wouldn’t it be funny if the text said that this is a duck?” From that very tiny seed of an idea I began thinking about what life would be like for this cat. I started thinking about my own childhood and being a multicultural person who didn’t fit in fully in either of the two worlds I inhabited. Eventually I came to realize that being multicultural doesn’t mean that I don’t fit in anywhere – it means that I have twice as many things in my background to celebrate. Quackers learns that it’s okay to be a cat and a duck and comes to embrace both halves of himself as well.

Who or what are some of your artistic influences?

Some of my favorite illustrators include Sophie Blackall, Jen Corace, Isabelle Arsenault, Carson Ellis, and Lisbeth Zwerger. I also love theater sets, dioramas and miniatures and tend to construct my illustrations like a theater set - with layer of flat scenery in front of which the characters act out their story.


Can you walk us through your illustration process?

I start with thumbnail sketches that are very loose and rough. As you can see, it's just to figure out the pacing of the story and get a rough idea of page layout. I'm not too concerned about being able to tell what's happening in the images, since this is just for me to make sure the story will fit in 32 pages (or 40, as this one turned out).

I used a combination of watercolor and digital, for the most part painting the characters traditionally and painting the backgrounds digitally and assembling it all. I use many layers in Photoshop so I can move things around easily or delete something that's not working. Here's a gif!

I also hand lettered all the text and cut out little cards to go underneath the text, scanned it all in, and as you can see in the gif, layered it on top of the illustration.​

I’m currently working on my second picture book. It’s another unlikely animal friends story involving waterfowl, but this time about an elephant and a goose.

Don’t give up! Persistence and patience is the key. There’s a lot of rejection in this business and it’s easy to feel like you’re not getting anywhere. Just keep learning, improving and submitting. Join SCBWI and go to conferences, and join a critique group. You'll hear a lot of "no" along the way, but you'll get little seeds of encouragement, too, until you finally get a "YES!"

What is the most surprising thing you learned about the publication process?

It’s a very slow process. It took two years from selling the book to it finally coming out. I turned in my final art almost exactly one year ago. So while you are waiting for your book to come out, keep writing, drawing and thinking about your next project.

I can't whistle or snap my fingers. My sister can do both quite well but somehow I never figured out how to do either. 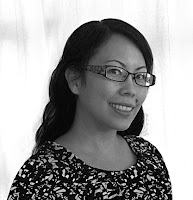 Liz Wong was born in Honolulu, Hawaii, where she spent her early childhood painting and clambering about in mango trees. At age five she won the first place trophy in the school poster contest, which encouraged her to pursue art instead of a sensible career in finance like the rest of her family. Liz's debut picture book, QUACKERS, comes out on March 22nd from Knopf Books for Young Readers.
Labels: Author Spotlight Illustrator Spotlight Liz Wong