Today we feature illustrator, professor and picture book author,  Mike Lowery. Be sure to enter to win a copy of his new series, DOODLE ADVENTURES! 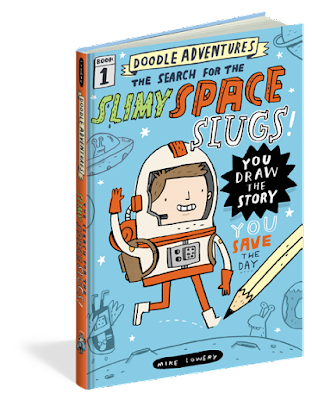 I've been drawing since I was a kid, and I guess I just never stopped. I would make little photocopied books about all kinds of stuff, and years later I'm still doing the same thing.

Your new series, DOODLE ADVENTURES, sounds fascinating. Tell us about it, and how you came up with the idea.

These new books are about a duck named Carl who is a part of a super-secret agency, and we have to help him out with his missions all over the world, back in time and into outer space. They're a hybrid between doodle books and a graphic novels for young readers. I really wanted to create a new type of book that would allow readers to help the story out by adding in their own drawings, and the Doodle Adventures series was born.

You do a wide range of work from food trucks to children's books. What draws you to a particular project? Which types of work do you most enjoy doing?

I love drawing all kinds of stuff, but I'm generally drawn to something that seems like it would just be fun to draw, which is why I like drawing for young audiences so much. I get to draw unicorns and robots, all kinds of animals, etc.

What is the hardest part about illustrating someone else's work?

Of course I always wonder if I'm getting their idea across the way they'd envisioned. Generally, though, when I talk to an author whose book I've illustrated they'll say it's NOT the way they'd pictured it but they're happy with the different direction it took.

What is the hardest part about illustrating your own work?

It's easy to overly obsess with every tiny detail and worry if I'm getting it just right. That's why I'm glad I've surrounded myself with friends and a wife who are also illustrators. When I'm working on something of mine, I can show them ideas and thoughts and they can help me push through.

Right now I'm finishing a few children's books, magazine spots...and of course the next Doodle Adventures book with Carl the Duck called The Pursuit of the Pesky Pizza Pirate. I'm also working on a book with hundreds of random facts that I've illustrated.

As a professor of illustration, what are the 1 or 2 most common mistakes you see young illustrators do when starting out their careers? What advice do you give them?

Right now a lot of young illustrators are making the mistake of posting every single mark they make on social media and hoping to get the right kind of feedback from the universe. This is a terrible way of figuring out your technique and style. I'm so glad social media wasn't a thing when I was in school and I had time to grow up before people started seeing a lot of my work. That way if I made some really bad stuff, it had a chance to die and grow into something a lot better.

There's also a side effect that comes from constantly feeling like you need to post (or you'll be forgotten): it leads to being terrified of making mistakes in your sketchbook. Sketchbooks aren't meant to be shown off all the time. I mean, sometimes pages can be beautiful and amazing, but they're meant to be a place where you take risks, try new stuff and just draw a TON without fear of messing up. If you constantly feel like you have to show off your sketchbook, you lock up a lot and don't take as many risks in your sketchbook.

I let my wife answer this one. She said that I'm a little obsessed with Craigslist, which is true. I love it. I like looking for vintage musical equipment (mostly keyboards), printers and art equipment, all kinds of stuff. We've driven all over the states buying random stuff from even more random places. 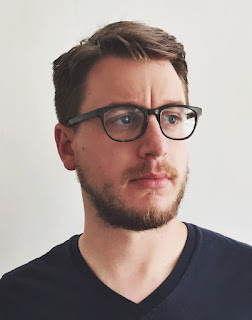 Mike Lowery is an illustrator whose work appears in everything from greeting cards to children’s books—and Workman’s Kid’s Awesome Activity Calendar. In Doodle Adventures™ – the first series Mike has written and illustrated – he invites readers to doodle along with him and Carl the Duck. The Search for the Slimy Space Slugs releases on May 17, and The Pursuit of the Pesky Pizza Pirate will be out in September. Mike shares more of his work at mikelowery.com and @mikelowerystudio on Instagram.

He lives in Atlanta, Georgia with his wife and daughter.