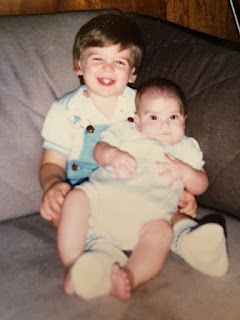 Like many mothers today, mine worked outside the home when I was a toddler. But each night, she surprised me with a new book to share. I quickly learned to associate books with love. I started writing as soon as I could hold a crayon. In fact, my grandfather and I used to add extras to my coloring books to tell our own stories!

I wrote throughout my childhood and teenage years, crafting my own tales to make sense of the world. Writing was my happy place. My safe place.

Though my degree is in secondary education, (life sciences) the need for sharing stories grew ever stronger. I enrolled our children in book clubs before they were even born.

I tried my hand at writing picture books when our sons were toddlers. But alas, as so many, the rejections chipped away at my confidence. (Full disclosure: they KILLED it.) And I gave up.

You see, both of our boys are very creative. By the age of six, Alex was captivated by video game design, and Steve’s heart was firmly set in the performing arts at age four. Although many tried to discourage them along the way (“programmers are a dime a dozen”; “why would you want to be a starving artist?” and much worse!), my husband and I always encouraged them to go for their dreams. “If it were easy,” we’d tell them. “Everyone would do it.”

When our boys graduated high school, my husband encouraged me to get back to “what I loved to do." I sighed. “It’s too hard.”

And that’s when both Alex and Steve looked at me and said, “What? Have you been lying to us all these years?” 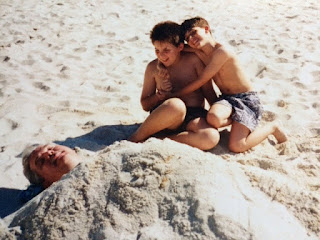 My husband made me a deal. “Hit it hard,” he said. “Go to conferences, take classes, make it your real job for the four years while the boys are in college. We believe in you.”

Four years later, our boys graduated with their dream degrees and my Dragon moved into the world.

I could never have done, nor continue to do what I do, without my family’s support. 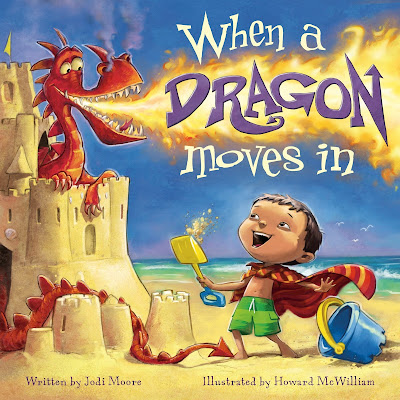 Building sandcastles with our boys was always a highlight of summer, and when they both left for college, empty nest hit hard. The first time my husband Larry and I went to the beach without them, our hearts were heavy. Still, Larry insisted on bringing the sand toys and set about building a castle. Within moments, he had a flock of little helpers. (Of course, I felt compelled to run to each family and explain why a mature man was playing in the sand and subsequently attracting their children…but once they heard of our empty nest woes, they all nodded and went back to their books.)

As they were finishing, one of the smallest boys fished out a piece of seaweed from the water and inserted it into the mouth of the castle. Ever encouraging, Larry smiled and said, “That looks like a dragon. Our castle is so cool, a dragon moved in.”

Then the heavens opened and the angels sang. The idea for WHEN A DRAGON MOVES IN was conceived. 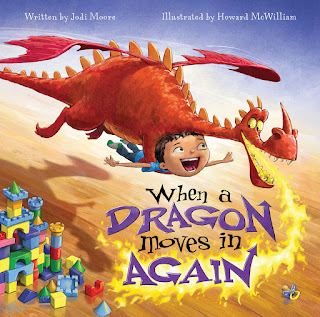 The clouds did not part quite so easily for the sequel, however. Sequels need to echo the first book, without being redundant. They have to share a voice, yet introduce a new conflict. What’s more, my editor wanted WHEN A DRAGON MOVES IN AGAIN to stand on its own, to be more of a companion book than a sequel. After three attempts and three rejections, I began to wonder if I could ever pull it off. (Full disclosure: tears and depths of despair may or may not have occurred.)

Then I realized I was trying too hard. I was obsessed with the idea of writing a sequel, instead of a story. When I reset my brain and heart on creating a good story – featuring characters I knew and loved – I relaxed…and was able to hear their voices again.

The boy in WHEN A DRAGON MOVES IN loved being center stage. What kind of something could impact his life as to draw his family’s attention elsewhere, including his beloved Dragon?

I thought about our boys, and our own family dynamics.

And then it hit me. The one thing that had affected my two sons as none other before was each other. That “something” was a sibling!

I attacked the challenge with newfound direction and joy, in an attempt to capture the trials, tribulations and jubilation of being both big and little brothers. As luck would have it, my brilliant illustrator Howard McWilliam and his lovely wife had just had their second son too. It’s like it was meant to be.

In searching for perfect sandcastles this summer, Baby Dragon reported back that while there was a plethora of fine real estate on the beaches, there was also a lot of trash. He has taken over my blog for the next month to try to reach out and ask our readers to please help clean up our beaches and parks. In fact, those who submit a picture to either my Twitter account (@WriterJodiMoore) or my Facebook page (Jodi Moore, Children’s Author) showing themselves doing so will be entered into a drawing for set of WHEN A DRAGON MOVES IN and WHEN A DRAGON MOVES IN AGAIN. The contest runs July 1 through July 31, with the winner announced on August 1.

As far as writing…

After years of being asked why I haven’t written any picture books with a strong female character (it’s not that I haven’t tried!), I think she’s finally arrived…at least in my head. Her name is Felicity Scott and she’s such a headstrong little tot, she’s already commandeered two stories in my repertoire.

In addition to Felicity Scott, I’m also working on several other picture books (have I told you about my sweet little spider who wants to ditch the web and join the ranks of show biz instead?) and a new young adult novel.

And of course, I’m hoping to sign with an agent, someone who will champion my work and “get the weirdness” that is me.

I would love to say I have a typical process, but I’d be lying. Each day seems to be different. Sometimes an idea comes fully realized (like WHEN A DRAGON MOVES IN); other times, it’s a wispy entity that needs a lot of nurturing. Admittedly, much of my writing plays out in my head like a movie…then I scramble to capture it on paper. I’m a character-driven writer, but sometimes they arrive in a rather filmy state and I have to wait until they begin to talk to me. Thankfully, I usually don’t have to wait too long. Once I turn my thoughts to other characters, they vie for my attention, and begin chattering a mile a minute. Kind of like my kids.

Read everything you can. Go to museums. Concerts. Shows. Explore nature. Keep a journal. Then play. Dabble. Draw. Paint. Write.

While it’s imperative to learn and refine your craft, it’s just as important to find your own unique voice…to celebrate and share your own vision and heart.

Celebrate and enjoy the process.

“Dare to fail gloriously.”
(I wish I knew to whom I should attribute this quote…I saw it on a poster years ago, and while I can find similar ones attached to famous folks, I still can’t find these exact words.)

Finally: don’t listen to the “no”-it-alls. Only you can tell your own story. And the world needs to hear it.

I once played the Wicked Witch of the West in a community production of The Wizard of Oz and made a child in the audience cry. It’s fun to be wicked every once in awhile.

Jodi Moore is author of the award winning WHEN A DRAGON MOVES IN and its newly released sequel, WHEN A DRAGON MOVES IN AGAIN (both Flashlight Press) and GOOD NEWS NELSON (Story Pie Press).  She writes picture books and young adult novels, hoping to challenge and inspire her readers by opening new worlds and encouraging unique ways of thinking.  Jodi is the proud, (admittedly) neurotic mother of two talented young men and never ceases to be amazed at how far the umbilical cord will stretch. She lives in Pennsylvania with her husband, Larry, one laughing dove and an ever-changing bunch of characters in her head. Finally, Jodi thinks it would be really cool if one of her stories eventually became a Disney or Universal movie or theme park ride. Or a Broadway musical. Just puttin' it out there.