Today we have the pleasure of interviewing author-illustrator Daniel Miyares. Be sure to enter the giveaway. THREE winners will get a copy of SURF'S UP, written by Kwame Alexander, illustrated by Daniel, plus a SURF'S UP backpack. 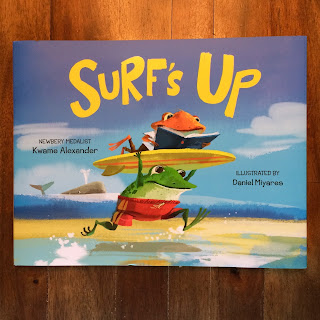 Please tell us about your background and how you came to write and illustrate for children.

Well, I was born and raised in Simpsonville, South Carolina. From pretty early on I knew art was my thing, so after high school I attended Ringling College of Art and Design in Sarasota, FL. It was as if I had found my long lost tribe. I majored in illustration and graduated with a BFA. With a sparkly new diploma in hand, I headed west to start my professional career at Hallmark Cards, Inc. in Kansas City.

I didn’t dream about making picture books as a kid. It wasn’t until a good friend of mine in KC asked if I’d be interested in sharing some work with his artist rep, Studio Goodwin Sturges, that I even considered it. I spent the better part of a year revisiting some of my favorite pieces of literature and built a new portfolio with them. In going through that process I uncovered the things that I truly love about telling stories. When we felt like the work was ready, they started shopping my new portfolio around. Not long after that I got my first book gig. It was as an illustrator for Neil Sedaka’s
WAKING UP IS HARD TO DO.

That was it. I was hooked.

You both write and illustrate picture books. Which came first? How do you decide whether to illustrate your own project or someone else's?

Illustration has always been my entry point for telling stories. Making pictures makes me happy, but for most of my formative years I was a closet poet. I didn’t give my writing as much credence as my illustrations. When I started making picture books I realized how silly that was and decided that I’d step out on the ledge a little bit. Now it’s difficult for me to separate the two.

I like to consistently work on developing stories of my own. If I didn’t, I think my head would explode, but it’s also extremely important to me to illustrate manuscripts that others have written. Walking in another author’s shoes for a while really does have a refining effect on me. Plus, I get to make books that I couldn’t dream up myself…which is awesome.
When illustrating SURF's UP, what kind of research, if any, did you do.?

For SURF'S UP, I started with frogs! I needed to figure out who these two friends were going to be. My first attempts were based on bullfrogs, but they didn’t seem young enough. Eventually I landed on tree frogs. There seemed to be an innocence about their features and expressions.

Because we were going to have this nod to Moby Dick threaded through the story, I had to go back and revisit Melville’s classic. It had been a long while since I read it. Also I got to learn a lot about whalers and whaling ships from the 19th century. I love history so that was a real treat.

Who or what are your artistic influences?

One of the biggest and most unexpected influences on my work has been my two children. They’re constantly reminding me how magical the world can be. Some of my favorite book makers right now are Lynd Ward, and Alice and Martin Provensen. Growing up I spent a lot of time studying Andrew Wyeth’s drawings and paintings. I’ve also got a lot of poetry laying around the studio- E. E. Cummings, William Carlos Williams, Langston Hughes.

Right now I am finishing up a book based on a series of paintings I’ve been doing on Instagram over the past two years. It’s called THAT NEIGHBOR KID. It’s with Simon & Schuster and will be out Summer 2017. I’m also working on a picture book of Langston Hughes’s poem Dream Variations with Schwartz and Wade. The title will be THAT IS MY DREAM!.

What media do you typically use for illustrations? What is your typical illustration process?

My process always begins with rough thumbnails and sketches. With these I’m usually just trying to get an understanding of my story and characters. I’m trying to answer questions like how am I going to pace the story and what emotional beats need to be included? I’m convinced that if I can capture the emotion that I want in a quick sketch then I can go right to a finished painting. My constant fear while I’m working on a book is that I’ll choke my final paintings to death and miss the whole point of the story.

As for how I execute my final images, I work in a variety of ways. I love drawing and painting with traditional media so I usually start there. Sometimes I’ll use gouache, watercolor, ink or acrylics to paint “parts and pieces” of my compositions and assemble them in the computer. I did this for SURF’S UP!. The backgrounds were painted separate from the other elements. I also have hand created textures and edges that I use to build illustrations.

Other times I use brush and paints to make the art without the computer at all. My new book THAT NEIGHBOR KID (releasing Summer 2017 from Simon & Schuster) is painted that way. It’s just ink on paper- pretty straight forward and raw.

The idealist in me likes to think that each story deserves to be treated in its own unique way. The story should determine the process, but truthfully sometimes I think I discover story ideas based on the process I use.

I’m a big proponent of the, “If you build it, they will come.” approach. Breaking into a new field seems to have a lot to do with connections and opportunity, but I would say first you need to have the craft and content that will allow you to take advantage of opportunities. So focus on your craft to start with and make the work you’d like to be doing professionally.

Also we live in such a connected age. It’s really amazing how you can track down and connect with just about anyone. Don’t hesitate to email the professionals who are doing work you appreciate. More often than not I’ve found that people are happy to answer questions or share their process.

That I grew up in the South Carolina but I don’t have an accent except when I say words like July, insurance, and pecan. 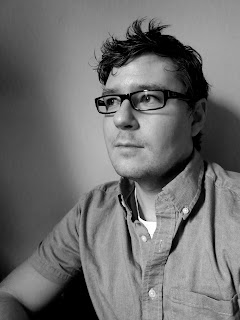 Daniel Miyares is an author and illustrator of stories for children. He has illustrated books such as Surf’s Up (written by Newbery Medal winner Kwame Alexander), Bambino and Mr. Twain and Waking Up is Hard to Do. Pardon Me! was his first adventure as an author/illustrator, followed by Float and Bring Me A Rock!. He earned a BFA in illustration from Ringling College of Art and Design in 2002 and has since worked for Hallmark Cards, Inc. Daniel currently lives in Lenexa, KS with his lovely wife and their two young children.