Today we are excited to feature author-illustrators, collaborators, and brothers Eric Fan and Terry Fan. They are the authors-illustrators of THE NIGHT GARDENER and the illustrators of THE DARKEST DARK, written by astronaut Chris Hadfield (Little, Brown Books for Young Readers 2016).

Be sure to enter their giveaway for a copy of THE NIGHT GARDENER! 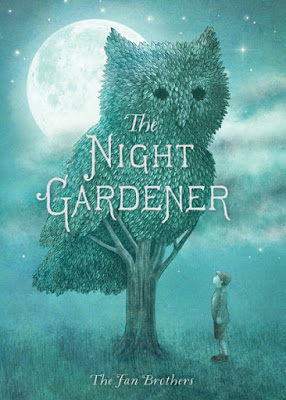 You have both had long creative careers. Can you tell us how you came to write and illustrate children's books?

Eric and Terry: About ten years ago, we both started submitting t-shirt designs to a site called Threadless. Threadless soon partnered with another site called Society6, which is a print-on-demand site where artists can sell and showcase their work. It’s a great forum for exposure because your work is being seen by a global audience. Unbeknownst to us, art directors and agents also visit the site and use it as a resource for finding new talent. So it was really happenstance and good fortune when we were approached by Kirsten Hall, who was just starting her new agency, Catbird Productions and looking for artists to fill her roster.

Congratulations on the great reception that your debut picture book THE NIGHT GARDENER received. What inspired this story?

Eric: Thank you! After Kirsten was representing us, she asked if we had any story ideas for a picture book. We remembered a design we did long ago, which was one of our very first collaborations. It was called The Night Gardener, and was also printed as a t-shirt design on Threadless. It was a stand-alone illustration that depicted the night gardener clipping away at an owl tree under the light of a full moon. We always thought there might be a story around that image, so we started thinking about what kind of narrative we could build around it.

The earliest seeds of the story can probably be traced back to our childhoods. Our dad has always had a great love of trees, nature, and bonsai, having grown up in the Taiwanese countryside. I think living in Toronto, he missed that and compensated for the cold Canadian winters by turning our house into something of a jungle. There was even a parrot flying free in the house. We ended up basing the character of the Night Gardener on him.

Terry:  In general terms, we wanted to tell a story about the transformative power of art and how one person can make a difference. I’ve always felt that art is a very powerful, yet undervalued, force in the world. It’s one of the most positive things that defines us as a species, our ability to create and imagine, so this story is basically a celebration of that. We also wanted to stress the importance of co-operation and community. In the story, the night gardener is the spark, but it’s the community being inspired and coming together that really creates lasting change in Grimloch Lane.

As an author-illustrator team, please describe your creative process, both writing and illustrating. Do the images or the story come first? Do you work on spreads simultaneously?

Eric and Terry: In the case of The Night Gardener, the image came first. It was kind of the springboard for the whole story. The next step was to construct a rough dummy of the book, which went through several drafts. By this time we were also getting lots of feedback from our editor Christian Trimmer, and our art director Lizzy Bromley (who were both amazing to collaborate with.) For the final art, we often work on a single illustration together, and other times we would each do different elements and bring them together in Photoshop.

Tell us about your recent release, THE DARKEST DARK. What, if any, research did you do to illustrate it?

Eric and Tery: The story is semi-autobiographical - the story of how astronaut Chris Hadfield was inspired to pursue his dream of becoming an astronaut as a child - so it was important to us to remain true to that and have a degree of verisimilitude. Mr. Hadfield was gracious enough to invite us up to his childhood cottage on Stag Island where the story takes place. It was an incredible inspiration, since we got to see his childhood bedroom and the neighbouring cottage where he watched the moon landing from in 1969. He also took us flying in a four-seat Cirrus, which was a thrill. I even got to pilot the airplane for ten minutes, which was both incredible and terrifying. 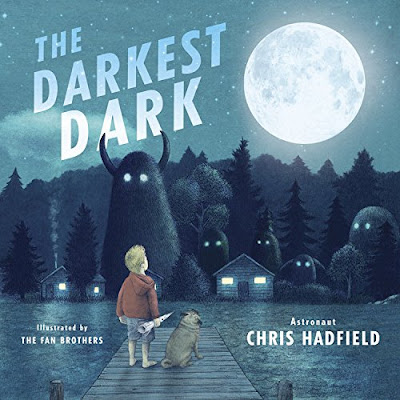 Eric and Terry: Right now we’re just finishing up on a book called THE ANTLERED SHIP, written by Dashka Slater. It’s being published by Beach Lane Books for Fall 2017. After that, we’ll be working on the next book that we wrote together, called OCEAN MEETS SKY (Simon & Schuster, 2018) and after that we’re illustrating another book called SCARECROW, written by Beth Ferry (HarperCollins, 2019.)

What advice would you give to other authors and illustrators?

Eric: The best advice I could give is to get your work seen by as many people as possible. The landscape for artists is so different now than it was when I was in art college. It’s possible to have your work seen by a much larger audience, a global audience, and there are so many avenues to get your work online - whether it’s social media like Instagram, Twitter, and Facebook, or whether its online marketplaces like Society6, and Redbubble. It can be a little daunting at times, but it’s definitely worth the investment.

Terry: I agree with Eric that on a practical level visibility is key. Joining one of the sites he mentioned would certainly be a good place to start. It's also important to develop an identifiable style and an artistic “voice.” Think about what you're trying to communicate and why it’s meaningful to you, the more personal the better. What relates to this is also embracing/appreciating your own particular idiosyncrasies, because the most valuable thing any artist has to offer is their individual style and perspective. Too often I see talented artists that are insecure or critical about the very things that make their work special and unique.

Eric: That despite having written The Night Gardener I struggle to keep even a single plant alive in my place. I definitely didn’t inherit my dad’s green thumb.

Terry: I’m almost completely deaf in my left ear. In noisy situations I do my best to read lips and just nod my head in agreement even though I usually don’t know what the heck anyone is saying. If someone speaks to me from behind I often won’t hear them. It’s probably why I hate going to parties/events so much.

Eric: I can be found on Facebook, Society6:  Red Bubble, as well as on our joint website: http://www.thefanbrothers.com/ 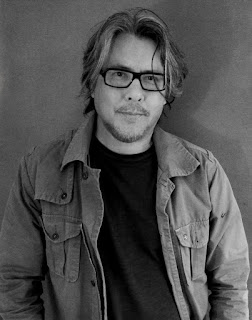 Eric Fan received his formal art training at the Ontario College of Art and Design in Toronto. His work is a blend of traditional and contemporary techniques, using ink or graphite mixed with digital. He has a passion for vintage bikes, clockwork contraptions, and impossible dreams. THE NIGHT GARDENER is his first picture book. 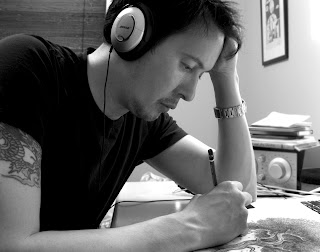 Terry Fan received his formal art training at Ontario College of Art in Toronto, Canada. His work is a blend of traditional and contemporary techniques, using ink or graphite mixed with digital. He spends his days (and nights) creating magical paintings, portraits and prints. THE NIGHT GARDENER is his first book. Born in Illinois, he now lives in Toronto.