Be sure to enter into the giveaway for his book, ARE WE THERE YET? 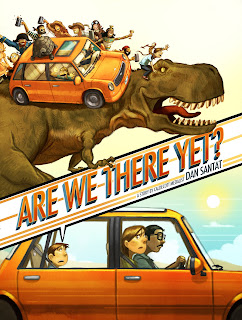 Tell us about how you came to write and illustrate for children.
My parents wanted me to be a doctor but I always loved art. Art as a career was never even an option. I spent years practicing on my own by copying images in comic books and TV. Eventually, I went to a four year college studying Biology and all my friends told me I was in the wrong field because they would look at my art notes and they would see elaborate drawings of cell components.

After I graduated with a Biology degree I applied to art school (my parents were surprisingly cool with it) and attended the Art Center, College of Design in Pasadena, CA. I thought I wanted to do animation for a living but after taking my first computer animation course I realized that I actually loathed it. I wanted a more efficient way to tell stories and so I signed up for Children' Book Illustration, which was perhaps the least popular class at the school.


I loved the class and devoted my studies to the business of children's books for the entire second half of my time at art school. After graduation I started working in the video game industry and would come home at night to work on my children's book portfolio.

A year later I took my art portfolio and my first dummy book to an SCBWI Children's Book conference hoping to get some feedback. During an art portfolio exhibition I was approached by Arthur Levine (editor of Harry Potter) and he was intrigued by my work and my dummy book. A week later he offered me a my first two book deal. My first book, THE GUILD OF GENIUSES, came out in 2004. Four year later, I eventually left my video game job and devoted my life to children's books full time.

We all have heard how hard you have worked—at one point, doing thirteen books in a year and barely sleeping. Have you been able to slow down since you won the Caldecott Award last year? How else has your life changed since then?
The short answer is, yes.

The long answer is yes, but I'm having a hard time with it because I hate sitting around and relaxing.

I can be more selective about the manuscripts I choose to illustrate and I've learned to say no to things I'm not truly excited about. I had a reputation for working quickly and hitting my deadlines and I took great pride in hitting all my deadlines, but sometimes I felt the quality suffered because I was rushing.

Now, publishers seem to take my requests more seriously and they will wait a year or two for me to take time with their project so I can do it properly and to the best of my ability. I keep my workload to a manageable level so I'm not burning myself out but not too little that I'm screaming at my own thoughts.

I've been invited to more events around the country so I travel a lot more (at least one or twice a month) Perhaps the biggest improvement in my life is that I've managed to quiet this anxiety in my mind that always told me I wasn't good enough, and it stupidly only took a major award to silence it. I wouldn't even say it's silenced. It's still there, but now it's not bothering me every day.

You’ve written and illustrated a few books and illustrated a whole bunch more. How do you decide whether to do your own project or someone else’s?
I'll always read a submission from an editor. What I typically look for is either something that has an emotional hook or has commercial appeal. Choosing which to do can vary for different reasons.

Books like CRANKENSTEIN were stories where you read it and you could see the appeal it would have for kids. It was relatable, funny, and it had something that seemed so obvious and you would be shocked when you realized no one had written it yet.


For years I was known as the funny manuscript guy or the action manuscript guy. I wasn't typically known as a guy who could do a quiet book until I wrote Beekle. It was a side of me that I knew I had but was never given the opportunity to show because I was sort of pigeon holed into a particular market. Manuscripts that give you a deep emotional feeling are the real gold projects as far as I'm concerned. I think it's a rare manuscript that can do that well. Right now I have a few of those type of stories on my plate that I've been offered to illustrate. Whether I can really make that emotion truly sing comes down to pacing and hitting my beats, and making the illustrations truly resonate with the words.

Your recent book, ARE WE THERE YET? is so inventive and interactive. What inspired the story and how you chose to tell it?
I was always intrigued by how my kids perceived time based on how bored or excited they were. If they were excited time went quickly, but when they were bored time felt very slow. I wanted to play with the idea of someone who could get so bored that they could make time go backwards and, "Are we there yet?" Is a phrase every family can relate to in long car trips.

It took a bit of time for the publisher to agree with the idea because they didn't want it to feel "gimmicky." They couldn't comprehend what I was trying to do when I sent them the PDF dummy and they had to actually print the book out and turn in into a physical dummy in order to interact with it. Once they did that it made perfect sense. I'm extremely proud of what I was able to do. It felt like something I had never seen before and it applied to the story, as well.
What projects are you working on now?
I just turned in my latest picture book called, AFTER THE FALL. It's about Humpty Dumpty finding the courage to climb back up the wall he fell off of. After that I'm diving into my next picture book and also my first YA graphic novel memoir called, YOU BAD SON, which is about how I went from science to art all during a period when my mother was going through breast cancer. I have another graphic novel I'm writing/illustrating called THE AQUANAUT which I have been juggling in between projects for the last six years, and I'm also illustrating multiple books that have been written by Aaron Reynolds, Rob Sanders, Min Le, Tom Angleberger, and Betsy Bird.

Wow, that's impressive! What advice would you give to your younger self?
Work hard, but worry less. Try to sleep more and start jogging at a younger age. Take up coffee. Don't listen to your parents.

What is one thing most people don’t know about you?
I roast my own coffee, but I only took up coffee drinking once I had my first child. I was 29.

Dan Santat is the Caldecott Medal–winning and New York Times bestselling author and illustrator of THE ADVENTURES OF BEEKLE THE UNIMAGINARY FRIEND (optioned by DreamWorks) and the road trip/time travel adventure, ARE WE THERE YET? His artwork is also featured in numerous picture books, chapter books, and middle grade novels, including Dav Pilkey's Ricky Ricotta series and THE COOKIE FIASCO with Mo Willems. His new picture book, AFTER THE FALL: HOW HUMPTY DUMPTY GOT BACK UP AGAIN, comes out October 2017. Dan lives in Southern California with his wife, two kids, and many, many pets. dantat.com
Labels: Author Spotlight Dan Santat Illustrator Spotlight