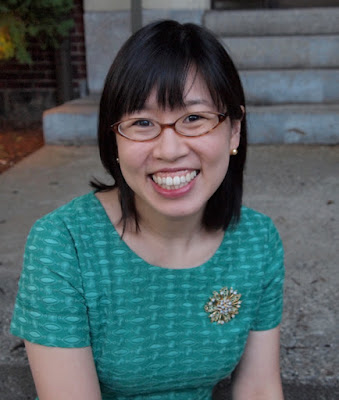 Today we are excited to feature New York Times bestselling author & illustrator of picture books, early readers and middle grade books, Grace Lin. Her novel, WHERE THE MOUNTAIN MEETS THE MOON, won the Newbery Honor in 2010. Enter to win the third companion book, WHEN THE SEA TURNED TO SILVER. 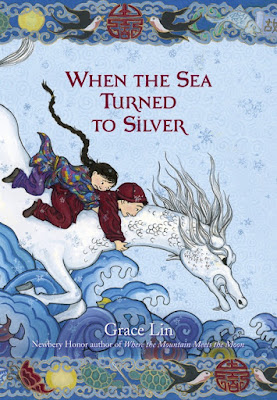 I’ve always loved books. As a child I read constantly and in my free time I would make books of my own, stapled together. Around 6th or 7th grade, I entered a national book contest with one of my books. I did not win 1st place, but I did win 4th place and I was so excited that I decided then I would write books when I was older.

You have talked about how you initially rejected your Chinese heritage and then come to embrace it. Can you tell us about that artistic and personal journey?

I grew up in Upstate New York where there were few minorities, especially Asian. My parents wanted us to blend; they wanted us to grow up really "American" and made the decision to speak to us only in English. So, my sisters and I grew up very Americanized. There were always subtle differences, like Chinese food or red envelopes, but most of the time we glossed over them.A lot of my books deal with Chinese culture because, in a way, I'm trying to find the culture I lost. When I was younger, I was ashamed or sometimes even angry about being Chinese. Most of the time I forgot that I was Chinese. Sometimes I would see myself in the mirror and be surprised to see a Chinese girl looking back at me.It's only now, after becoming an adult and I realized that there was something I lost, ignoring these parts of my heritage. There were a lot of things that we did, traditions like eating ginger soup at a baby shower, which I never bothered to learn more about. So now, I research these kinds of things about my heritage. I'm making the books I missed when I was younger.

Congratulations on your latest release, WHEN THE SEA TURNED TO SILVER, which was a 2016 National Book Award finalist! How did this and its companion novels come about?

WHEN THE SEA TURNED TO SILVER is the third companion of my folktale/fantasy trilogy (the first being WHERE THE MOUNTAIN MEETS THE MOON). These books were inspired by the Chinese folktales and myths that I read as a child and when I began to write this book, I researched and read a lot more.

Many times, I would read a myth that was little more than a line and would be unable to find more—which lead me to create the story in my head. For example, at Chinese New Year, it is common to find pictures of two plump children dressed in red decorating doorways. These children are called Da-A-Fu. Why? I researched and only found a very short summary of them: they were two spirits transformed as children sent to destroy a green monster that was terrorizing a village. There were no details of how or why or what village, but it was enough to spark my imagination. So with that, I created the twin characters of A-Fu and Da-Fu in WHERE THE MOUNTAIN MEETS THE MOON who destroys the Green Tiger.

So, most of the folktales in the book are my reinterpretations of traditional tales—with those, I have taken creative license and reshaped them slightly so that is fits in with my overarching narrative. These books are retellings of Chinese folklore with my Asian-American lens and contemporary tastes.

What is the hardest part of writing and illustrating for you? The easiest?

Hmm, the hardest part of writing and illustrating for me is the first draft/sketches. Revisions and painting—especially the painting—are a much more enjoyable part of the process. Though, I wouldn’t necessarily call that easier, either.

Truly, the easiest part of writing and illustrating is when you are signing a finished book for a reader!

I have a four-year daughter and with her, I’ve rediscovered the beauty of picturebooks. So, I’m returning to picturebooks for a little while. My next book is called A BIG MOONCAKE FOR LITTLE STAR. It’s a big departure for me in terms of art style but I am excited about it.

What advice would you give to your younger self? Is this the same as you would give to aspiring authors & illustrators?

Hmm, if I were going to give my younger self or upcoming authors helpful fortune cookies, I think the fortunes would say:1. Remember, writing a book is personal; publishing a book is not.
2. Another person’s success never takes away from your own.
3. Talent is nothing if passion, perseverance and discipline does not accompany it.

I can’t whistle.
Where can people find you online?

I’ve kind of withdrawn a bit from social media and the like; but my website is gracelin.com and my blog is gracelinblog.com. I check in on my Facebook page occasionally
—facebook.com/authorgracelin and I have a Twitter handle I use even less occasionally: @pacylin. If people really want to keep up with me—new books, etc—the best thing to do is to sign up for my newsletter.

Grace Lin is a NY Times bestselling author and illustrator of picture books, early readers and middle grade novels. Grace's novel "Where the Mountain Meets the Moon" was awarded the Newbery Honor in 2010 and Grace's early reader, "Ling and Ting" was honored with the Theodor Geisel Honor in 2011. Most recently, the cover illustration for her novel "When the Sea Turned Silver" (a 2016 National Book Award Finalist) was displayed at the White House, where Grace was recognized as a Champion of Change for Asian American and Pacific Islander Art and Storytelling. Many of Grace's books are about the Asian-American experience because she believes, "Books erase bias, they make the uncommon everyday, and the mundane exotic. A book makes all cultures universal."