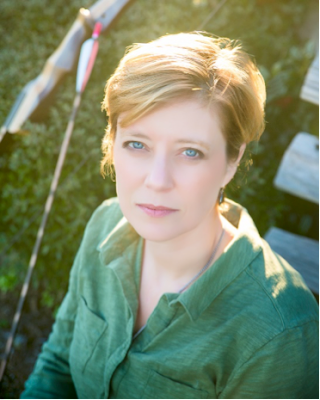 Today we feature YA debut author Erin Beaty, whose book, THE TRAITOR'S KISS (Macmillan Imprint) is coming out on May 9.  It's gotten some great buzz (a starred Publisher's Weekly review and a great Kirkus review, among others) Be sure to enter to win a copy of the book! 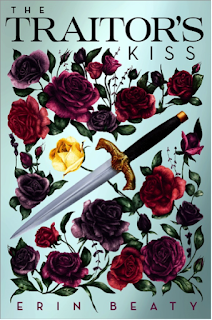 Tell us about your background and how you came to write for teens.

I was always about science and math growing up. Writing was a skill to be mastered for clearly expressing ideas, and that was pretty much it. When I went to the Naval Academy, I was shocked at how poorly my fellow engineering majors wrote. I ended up doing pretty much every group lab report. My good writing reputation followed me into the Navy, but I still never considered myself anything other than an engineer.

As a stay at home mom, I had a blog to keep long distance family in the loop on our daily lives. People kept telling me I should write a book, but I resisted for years. Every idea I played with was a young adult story, though. There’s something about that time of life that’s more interesting and open to possibilities. That’s when you start making the decisions that will affect you for the rest of your life and you leave the shelter of your home and venture out into the world. It’s exciting and scary, and I think YA is popular with adults because they remember that pivotal time so well. It’s a great time to relive, even in a dystopian world.

Congrats on your debut YA novel, THE TRAITOR'S KISS. Tell us about the story and what inspired it.

I have a background in personality typing, and those dating websites that make you answer a bunch of compatibility questions have always fascinated me. There was also a time I did a lot of binge-reading of Tudor England and Middle Ages era stories with all the political maneuvering and marriages (and divorces) for advantage. It was kind of a random connection, but I started wondering if a matchmaking kind of service would have worked in those times. Most people didn’t really travel very far from where they were born, so a system designed to find better matches than what was available within ten miles wouldn’t necessarily have been a bad idea. It would be run by women, of course. They could have their own guild just like carpenters and stonemasons; you don’t want just anyone arranging this stuff.

In my mind, I started to build a fictional society that used a system like that. It seemed pretty logical, actually. A hodge-podge nation of different cultures might need it to hold itself together. Heck, in a culture where women were somewhat second-class citizens, the matchmakers could pretty much run the country from within - strengthening ties that had weakened, undermining families they saw as too powerful. I really liked the idea of the powerless turning the system to their advantage.

But if one group can game the system, so can others. What if someone used it to build their own strength in order to seize power? Who would even notice but the matchmakers?
Everything just sort of grew out of that. It was very organic- every step, every branch of the plot was completely natural.

Sage Fowler is the daughter of parents who went outside the system, which wasn’t illegal or anything, but mostly scandalous. She was raised to hate matchmaking, but when her father died, she was left in the care of her uncle, a rich man who thinks it’s an honor to have her marriage arranged this way. (Plus, he really wants her out of his hair and settled.) Her matching interview, however, is a disaster, partly because Sage really didn’t want to go through with it in the first place. I always had it in my mind that the matchmaker herself had set Sage up to fail, but the motivation for doing so actually surprised me when I wrote it out. The matchmaker went from being a self-righteous witch to one of the coolest characters ever. And Sage turned out to be a bit of a brat in some ways.

They end up working together, selecting brides for a nation-wide marriage conference held every five years, but on their way to the capital, they have to pass though the lands of someone who has his own plans. After all, half the wealth of his neighbor is coming right to his doorstep! Only time and a tiny ceremonial escort with a very reluctant leader stand in his way. The escort’s captain senses a military threat building, but what he doesn’t see is the social element. Sage turns out to be the key to realizing just how bad their situation is. Using Sage and her insight is delicate, though, because there are secrets he has to protect, so he uses a handler named Ash Carter to get what he wants from her. And love gets in the way.

That sounds like a great read! Was your road to publication long and winding or short and sweet, or somewhere in between?

Well, it felt like an eternity while I was living it out, waiting long hours to hear back from agents and editors and even critique partners, but in reality my journey was one of the shortest I’ve heard. I wrote my first draft in about six weeks, starting May 7th 2014, then after some editing, I started querying about four months later… which was way too soon, my manuscript needed a lot of work. I realized that and hit pause on querying for some major revisions. When I ventured back out, it was about a month later that my agent offered me representation. From the day I started writing to the day she emailed me asking to talk was almost exactly one year.

My agent and I went through a couple rounds of revisions, made longer because my family was in the middle of a military move. I remember it was right around Halloween that she said “Alright, it’s ready to go out to publishers!” I wasn’t so sure, but I had reached the point of not being able improve it any more. A week later Valerie (my superagent) sent me a list of who she had submitted to, and they were all Very Big Publishers. At first I freaked, wondering what the heck Valerie was thinking. My manuscript wasn’t that good! Then I calmed down and told myself it was okay. The big guys would reject me, but they would probably tell me why, and we could revise based on their comments, and then go out to the mid-sized publishers with an improved product. Two weeks, later the first rejection came, but not with any advice I could use. I shrugged because I expected that. The publishing world then shut down over the holidays, so I was able to relax, knowing there would be no news for those weeks.

Macmillan called one week into January. Talk about freaking out.

Publication was set for Fall 2017 (it was then early 2016), but I got picked for the Fierce Reads Spring tour (another surreal experience), so the release was moved up to May 9th, 2017, which means it was almost exactly three years from start to shelves. Almost half of that was after the book had been sold. The publication process is slooooow. 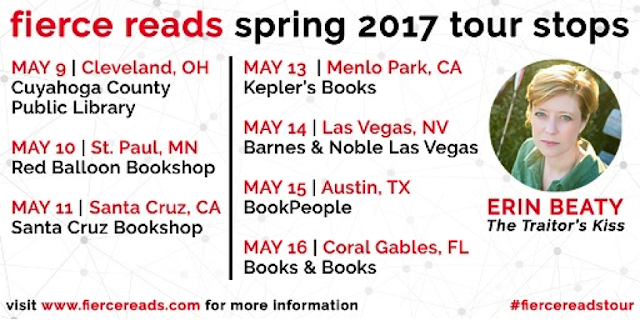 In talking to other debut authors, I learned most didn’t sign with an agent until their 3rd or 4th manuscript. Many didn’t even sell the first novel their agent sent out to publishers! Almost everyone had been writing for several years. My journey was definitely on the quick side.

THE TRAITOR’S KISS was sold as a standalone that had potential for more, and after I was invited on the Fierce Reads tour, we offered the publisher plans for a sequel. They immediately said, “Yes, and a third book, too, please!” so I’ve got my work cut out for me. As of this moment, I’ve turned in a full draft of the second book and plotted out the third. Now I’m just waiting to get back the editor’s revision notes. We know it will need a lot of work because it didn’t get nearly the same amount of critique as the first, but they are confident I can do it. As soon as I have an idea of what might change that would affect Book 3, I’ll let that fly onto the page. I can’t wait to get to work on either. In the meantime, I have future projects brewing, but life is getting in the way of writing and researching them. They’ll happen eventually, though.

Read in your genre. Get critiques on your work and critique others - the latter will help you find mistakes in your own work. Read outside your genre. Listen to the advice of others, but don’t be afraid to discard what doesn’t work. Find your own process. Oh, and READ.

I was a flag twirler in high school. Spandex, sparkly sequins, and lamé all the way, baby.

Erin Beaty was born and raised in Indianapolis, Indiana, which means she can't drive a tractor, but she won't eat veggies that come from a can. She graduated from the US Naval Academy with a degree in rocket science and somehow always ended up writing her group’s lab reports. After serving in the fleet as a weapons officer and a leadership instructor, she left the Navy to raise her growing family. Once the kids were all in school, she sat down at the computer and started writing. To her surprise, people actually want to read it! Erin and her husband have five children, two cats, and a vegetable garden and live wherever the Navy tells them to go.
Labels: Author Spotlight Erin Beaty