Tell us about yourself and how you came to children's illustration.

I am an artist and filmmaker from Virginia. I studied Studio Art and Media Studies at the University of Virginia (c/o 2010), where I had a focus on cinematography. I later went to CalArts to get my MFA in Film (c/o 2014.) Calarts is pretty famous for being the “Disney School” of animation but I was in an entirely different department. While I was finishing my thesis film in my final year I decided take a drawing class for fun. I drew a lot as a child, through high school and into college, but once I started making films I stopped. I was so frustrated that I couldn't keep up with the undergrads in that program that I made it a personal goal to draw every day.

Fast-forward 2 years, I was nervous and insecure about my illustration, but I joined SCBWI so I would have some guidance in this world of publishing. I submitted an illustration in the #drawthis competition and it won. It was placed in the monthly newsletter which caught the eye of an art director and I got my first book offer. Later that year (2016) I went to the SCBWI Mid-Atlantic Conference where I met my agent.

You wear a lot of hats - filmmaker, designer, illustrator. How do you decide where to focus your time? How do the various disciplines influence your illustration?

I am not the best at juggling the different roles but I try to be as pragmatic as possible. Right now I am working on several books, so in the meantime I’m still submitting films to festivals so that my name is still out there. They are very different types of expression that don’t pull from one another, but I still have the same mindset when I approach creating. I like beautiful images and elegant layouts. I do try to push a cinematographic approach to picture books, since I feel hardwired for it. I’m new to writing books, but scriptwriting is an old love. I’m still experimenting and learning, but strong story and beautiful compositions are singular goals.

Of the many illustrators I've come across, you have one of the most robust social media followings (18,500 followers on Instagram). Can you tell us how you built up your social media platform? And how has it paid off for you in terms of assignments or leads?

I had a pretty methodical approach to my Instagram. I’ve had a personal account since the early days of the app, and I worked out what works and what doesn't when searching for an audience. It takes time and sometimes luck. But I began with a very clear aesthetic. If you scroll down to the early posts, you’ll see they all have a particular layout. I wanted a page that was unique and very visually stimulating. If an image didn't work with the flow of the other images I would delete it. I followed people who were following artists similar to me or artists I like. I hashtagged a lot. And I make specific work for Instagram - It's a space for my sketches and practice, but I also know my audience and I know what they’re gonna like. I cross my fingers for the images that I hope will go viral - that's what brings in big waves of followers. I participate in trending challenges (#stylechallenge, #meettheartist #inktober #mermay) I tag images for “gallery” accounts to regramm and I like a lot of photos. People can sniff out spam very easily so you have to act like an actual person and post pretty regularly.

Instagram brought me my first commissions - so for a while I was living minimally on just that income. Art Directors and Editors are on there, looking around quietly. So it’s important to keep your page aesthetically strong and professional. I also got connected with Apple through Instagram. An events coordinator reached out to me to do live drawing on the iPad at stores here in New York. One is next week June 7 at the Apple Store in SoHo.

I’m illustrating a picture book for Greenwillow Books called LUNA AND THE SCIENTIFIC METHOD by Shelli Johannesburg and Kimberly Derting and I recently agreed to a 3 book deal with Little, Brown for my own written and illustrated books - the first of which will be out next year.

I get inspired by a lot of things. I walk around with an active eye - perhaps a holdover from cinematography - to find magical moments anywhere. I either make mental notes of how the light is falling or certain colors on the sidewalk or take photos to create a visual library. But since I didn’t study illustration I look to other artists for inspiration as well. There are a lot of contemporary artists that I love: Pascal Campion and Brittney Lee. Classic Disney artists like Mary Blair and Eyvind Earle. Storybook illustrators Gyo Fujikawa and Miroslav Sasek. I love finding illustrated album covers like ones by Chic Laganella.

I get inspired very easily when I’m at my parents house where I grew up, and in Trinidad and Tobago where my mother was born. But a very inspirational event for me was visiting the Van Gogh museum in Amsterdam in 2015. I had low expectations for a very snobby reason. I hate the hype and commercialism around his paintings. In other words I felt too cool to like something so in the mainstream. But I was really taken aback by the story. Vincent forced himself to paint every day for a year, and the museum does a lovely job of presenting the work chronologically. It was so humbling to see his work progress in such a short amount of time, and know he still never knew if he was good. By the end you really can see how much he improved. It's so beautiful and so tragic. I think about it a lot.

What is your medium of choice for illustration?

90% of the time I work digitally in Photoshop with a Cintiq tablet. When I’m travelling or when I want to break free from my desk I draw on my iPad Pro with the Apple Pencil in an app called Procreate. There's a more natural “pen to paper” feel for me when I can just go anywhere with it so sometimes I’ll have better ideas when working on the ipad than at my computer. I still sketch in a notebook and paint just for fun.

What advice would you give to an aspiring illustrator?

I am still very insecure about my drawing. You’ll see that I change up my style a lot - that is literally me practicing. I have no idea if I have my own style of illustrating, so I’m still trying to learn whenever I can. 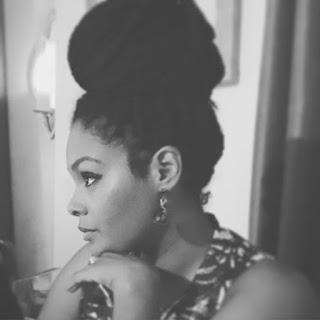 Half filmmaker and half illustrator, Vashti Harrison is an artist originally from Onley, Virginia. She has a background in filmmaking and a love for storytelling. She earned her BA from the University of Virginia as a double major in Media Studies and Studio Art with concentrations in Film and Cinematography. She then went on to receive her MFA in Film and Video from CalArts where she snuck into Animation classes to learn from Disney and Dreamworks legends. There she rekindled a love for drawing and painting.  Now, utilizing both skillsets, she is passionate about crafting beautiful stories for children and young adults in the kidlit world.
Labels: Illustrator Spotlight Vashti Harrison