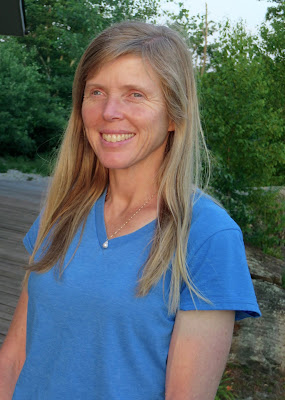 Be sure to enter to win a copy of her new books in the Rafflecopter below!

Tell us about yourself and how you came to write picture books.

Let's see... what would you like to know about me?

I could tell you the basics - mom of 5, granny of 2, author of 12 going on 17 (two of which were hot off the presses on July 11, and one of which will be out on July 25!), teacher of picture book writing, blogger, stall mucker extraordinaire, and lover of animals and chocolate.  But you probably already knew that stuff!  I'm pretty sure you knew about the chocolate, anyway!

So to liven things up, if you promise not to report my mom to CPS, I'll tell you that she fed us SPAM when we were kids...and not even just when we were camping! Sometimes for regular dinner! (Who knows what effect that had on our developing brains?!)

We had 4 cats.  I got mine when I was 5. I named her Louisa. I have no explanation for that.  It may have been the SPAM!
I wanted a dog, but my dad said New York City was no place for a dog.

I desperately wanted a horse, but my dad maintained that it was impractical on 96th Street, so I rode my bicycle for miles pretending she was a horse. (Her name was Sparkling Gemstone, in case you are interested ) Have you ever attempted posting trot on a bicycle?  I have.  It is possible... with some practice!

Horses may have been impractical on 96th Street, but books were not. Our apartment was full of them. You can only imagine my surprise when I began visiting school friends and discovered no one else's walls were lined with sagging bookshelves, and no one else had books stacked all over the floor! The bedroom I shared with my sister had a large, heavily loaded bookshelf which contained my introduction to the wonderful world of reading and writing: Harry The Dirty Dog, Mike Mulligan and His Steam Shovel, Make Way For Ducklings, Curious George, Madeline, Bread And Jam For Frances, The Story of Ferdinand, And To Think That I Saw It On Mulberry Street, Are You My Mother, Flap Your Wings, and many, many more. And those were just the picture books!

So you can no doubt see how a childhood full of books and pets and bicycle-horses, siblings and camping and more SPAM than is probably healthy, followed by children and grandchildren and a further menagerie (I am currently dog mom to 2, temporary foster cat mom to 1, and in charge of 1 spotted pony) might inevitably lead one to a life of writing picture books!

As Anne of Green Gables would say, there is so much scope for imagination! (BTW, I learned yesterday that there is a SPAM Museum in Minnesota!  Can you believe it?  The world is so full of interesting things - how can we NOT write picture books?!)

Congratulations on your multiple picture book releases! WOW!  Can you tell us a little about the stories and what inspired you to write them?

Thank you so much!  It is truly thrilling!  As far as inspiration is concerned, I believe I mentioned I have 5 children...

WHEN YOUR LION NEEDS A BATH is about a lion who does not wish to get in the tub - not terribly surprising given that he is a cat!  The story was inspired by one of my daughters who went through a brief but impressively violent stage of refusing to bathe.

WHEN YOUR ELEPHANT HAS THE SNIFFLES is about (you'll never guess!) an elephant who gets the sniffles.  This one was inspired by all of my children who have plenty of experience with sniffles.  At their hearts, though, the stories are also about larger things.  LION is about perseverance, determination, and ingenuity, and ELEPHANT is about taking care of someone you love.

THE ROAD THAT TRUCKS BUILT was inspired by my son who, as a preschooler, was completely obsessed with heavy machinery. It was also inspired by a good friend who actually builds roads. On the surface, the story is about the process and the different trucks needed to build a road. On a larger level, it is a story about teamwork.

You've published several picture books now. Has your journey been long and winding, short and sweet, or something in between?

I'd say I broke well from the starting gate and continued strongly into the first turn. I settled in comfortably, keeping pace just behind the leaders for the first couple furlongs.

Rounding the second turn, though, I lost my footing a little. The race became more of a struggle and I was plagued by discouragement and felt I was losing ground. I was blocked in.  I looked for a way around, hoping to get my nose back out in front. But try as I might, I couldn't make any headway. My spirits flagged. I wondered if I had what it took to keep running.

Then finally, after four long years without selling a manuscript (yeah, I know that part doesn't fit my clever horse race metaphor! J), I got my second wind and began to feel that maybe I still had a chance in the race. So, I don't know if I'd say long and winding or short and sweet... maybe more hilly (no pun intended) - some ups, some downs, some moments of feeling lost in the darkness between mountains, but some of standing at the top, exhilarated by the breathtaking view.

Right at this exact moment, I'm waiting to hear back from my editor about WHEN YOUR MONKEYS WON'T GO TO BED, for which I submitted the manuscript revision and am now in that nerve-wracking, nail-biting in-between where I wait for the email that will let me know if I'm on the right track or if I need to go back to square one!

Oh, gosh. Good question. The easiest thing is sitting down and writing. I can almost always think of something to write and get down a decent number of words in the basic shape of a story. But that doesn't mean it's any good! The hardest thing is making that writing be something anyone would want to read!  Is the idea interesting enough?  Is the execution fresh enough?  Is it fun to read?  Does it make you want to turn the page? etc, etc, etc!  We are all familiar with that, I think.

This is the question that gets asked in every interview.  I've answered it a fair few times over the past couple weeks of the blog tour, so I apologize to anyone who has been following along because I will most certainly be repeating myself!
But maybe today I'll present it as:

WHEN YOUR WARTHOG WANTS TO WRITE
Hey, look!

Someone's at the computer!

Does your warthog want to be a writer?

When your warthog wants to write, you'll have to teach him a thing or two!

(Since he's a warthog, you might have to start with the alphabet)
Start by reading him A LOT of picture books so he gets a feel for the market - what's popular, what sells, what appeals to parents, teachers, librarians, and kids.  Let him turn the pages so he feels involved.

These books will teach him a lot, and by the time he's done, he'll think he's ready for the Big 5.

Tell him patience is a virtue, even in warthogs, and sign him up for some writing classes - in real life or online.  He might feel a little nervous, but assure him you'll be right there with him.
(If he goes to a real life class, you might have to give him a bath first... but that's another story.)

Give him some paper and a crayon in his color of choice and tell him to write.

And write some more.

And write some more!

Take him down to the watering hole and join a critique group - in person or online.  It's all well and good for you two to share your manuscripts with each other, but it's a good idea for him to get valuable objective feedback from his peers, plus he will get to practice his own evaluative skills by reading and commenting on their manuscripts.

It can be hard to take constructive criticism, but tell him no one likes a grouchy warthog J and make him write some more.
Practice makes perfect!

Give him his allowance early so he can join SCBWI, and let him use your laptop so he can follow KidLit411.  Just make sure he washes his hooves first.

By now he'll be a wee bit stir crazy from all that learning and writing.

Remind him how important it is to get up from his desk and go out into the world to experience life!  Send him out to do things.  Go places.  Learn stuff.  You never can tell where ideas might be lurking or what might spark interest and a possible story.  He should also hang out with his little warthog friends because where there are kids, there are ideas!

Encourage him to find online communities of interest, including 12x12, Storystorm, ReFoReMo, RhymeRevolution, and the aforementioned KidLit411 (among others) - places where other PB writers hang out, and share information, and learn from each other.

Give him some chocolate...and get some for yourself...
and before you know it,

after all, you've taught him,

will be displayed side-by-side at your local indie bookstore!

Wonderful! What is one thing most people don't know about you?

I am incredibly good at pogo-sticking! (Is that a word?) When I was a kid, I practiced on the sidewalk outside our apartment building.  My pogo stick was orange. You will be relieved to know it did not have a name. I could pogo to 1000 without turning a hair.  Even at my advanced age (over half a century!), I can pogo til the cows come home.  I can out-pogo anyone in my house or in my neighborhood.  Frankly, there's not much competition!

I hang out at susannahill.comhttps://susannahill.com/ - that's where my website and blog are, as well as all the goodies associated with my books.  That is also where, if you're interested, you can learn about and sign up for my online picture book writing class, Making Picture Book Magic, (HIGHLY RECOMMENDED BY KIDLIT411! or sign up for a critique.

You can also find me on

and I just joined Instagram, but I'm so new to it that I don't even know if there's a way to give you a link!  But if you want to come find me there I'm @susannaleonardhill and I'd love to be, uh, friends? Is that what you are on Instagram?


Susanna is the award-winning author of over a dozen books for children, including Punxsutawney Phyllis (A Book List Children's Pick and Amelia Bloomer Project choice), No Sword Fighting In The House (a Junior Library Guild selection), Can't Sleep Without Sheep (a Children's Book of The Month), and Not Yet, Rose (a Gold Mom's Choice Award Winner and an Itabashi Translation Award Finalist.)  Her books have been translated into French, Dutch, German, and Japanese, with one forthcoming in Chinese.  Her newest books, When Your Lion Needs A Bath, When Your Elephant Has The Sniffles, and The Road That Trucks Built will be published by Little Simon in July 2017.  When Your Llama Needs A Haircut (Little Simon) and Alphabedtime! (Nancy Paulsen Books, an imprint of Penguin Books) are forthcoming in Spring 2018 and Spring 2019 respectively, with additional titles coming in 2018 and 2019.  She lives in New York's Mid-Hudson Valley with her husband, children, and two rescue dogs.