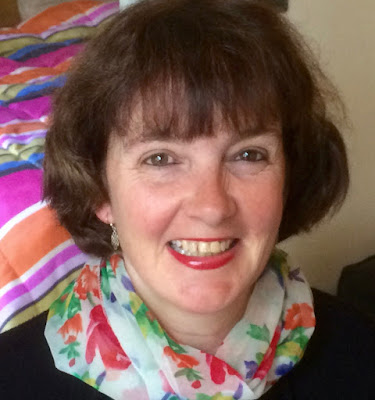 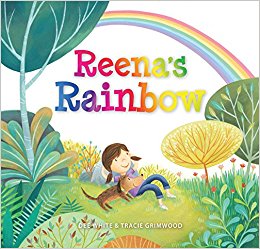 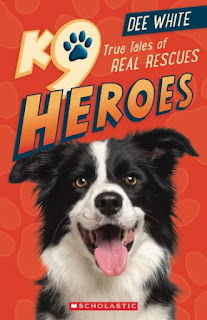 I live in regional Victoria, Australia with my husband, two boys and an aging population of pets. I've always loved animals, which is probably why they often appear in my books. Animals seem to find us, and our highest count of rescue pets at any one time was two goats, one rabbit, two dogs and two cats.

I had wanted to be a writer since I was seven years old. Which is kind of weird because I'm not normally that decisive.

When my boys were eight months old and two and a half years old, we set off on a camping trip in tents around Australia for almost two years. We spent many hours around the campfire telling made up stories ... and some of these just kind of evolved into books.

Congrats on your recent and upcoming books, REENA’s RAINBOW and K9 HEROES. Tell us about them and what inspired you.

Thanks so much. They're very different but I love both of them.

REENA'S RAINBOW is about a deaf girl and a homeless dog and the special bond they form which helps them bring together the deaf and hearing worlds. It's a story about friendship and acceptance. For me it was important to show that accepting diversity isn't just about helping someone assimilate into your way of life, it's about stepping into their world as well. In recent years, I've suffered hearing loss, and it made me think about what life would be like for someone who was born deaf.  This is the sixth book Tracie and I have worked on together. I just love her illustrations ... and she seems to really understand my text.

K9 HEROES is a series of four stories from USA, Canada, France and Australia inspired by true events. They are stories about dogs who have saved people's lives. It's due for release in December this year. I made a book trailer for it which was fun. It's on Youtube and also here:

I was actually staying with a writer friend in Aptos, USA when I came up with the idea for K9 HEROES. I have always loved dogs and admired how loyal and courageous they are. There seemed to be a lot of children's books out there about people who have rescued dogs, but not many stories about dogs who have rescued people. I really enjoyed the research process for this book, and finding stories from around the world.

You are a prolific author in Australia. How does publishing there compare to the U.S.?

The Australian market is a lot smaller than the U.S. market. There are only about 15 or so major literary agents in the whole of Australia, and they don't usually take on unpublished writers.

The good news is that in Australia it seems to be much easier to submit direct to publishers ... but there aren't very many of those either.

I love Australian Publishers. I think that what they produce is unique and wonderful, but it's not easy to get your work published outside Australia if you don't have an agent, and as I mentioned before, it's very hard to get one.

As we have a population of less than 25 million people, we don't have big print runs so to make a living as a writer, you have to either produce a lot of books, or sell your work internationally as well.

I've had educational books published overseas, but REENA'S RAINBOW is my first international trade publication. It's being released simultaneously in U.S.A, U.K, Canada, Australia and New Zealand - so exciting to think that readers from around the world can read my book.

Last year I was lucky to be taken on by U.S agent, Jill Corcoran for my MG novel, BEYOND BELIEF. I also received a grant to spend a month in Paris researching the book in March this year, and that was so amazing. Jill is a fabulous agent, and has been so enthusiastic and supportive of my writing and my career.

You and I met at the Nevada SCBWI Mentor program several years ago. How has this or other similar programs affected your career?

It was so great to connect with you there. Isn't it an amazing program? I was lucky to be mentored by both Ellen Hopkins and SusanLindquist and I learned so much from them and feel that the mentor program really helped me develop as a writer. I was also fortunate to get a CAL grant to help me cover the costs of travelling to the U.S.A.

I did a mentorship with the Victorian Writers' Centre in 2002 for a novel that was subsequently published in Australia, and in 2009 I was awarded a May Gibbs Literature Trust Fellowship.

I'm currently in the process of applying for another grant as I'd like to come to the U.S.A next year to do more research for the YA novel I was working on in Nevada. It's set in Seattle so I'd love to spend some time there.

Writing residencies and mentorships are a great way to see the world while doing something that you love. They have also helped me network and learn craft from other amazing creators, and see how writing for children and YA differs around the globe.
What projects are you working on now?

At the moment I'm editing Beyond Belief, an MG novel about Muslims at a Paris mosque who saved Jewish children in WW2.  I'm also writing a more contemporary MG adventure, Paris Hunting about a boy who finds a letter in the wall of his Great Grandfather's home and sets out to uncover the secrets it holds.

My advice to my younger self would definitely be, "Have more faith in yourself and start taking your writing seriously earlier." We often put off writing because of work, finances, family etc, and society doesn't consider writing to be a proper career. We just have to prove society wrong. In places like Europe they seem to value their artists a lot more.

My eighteen year-old son is an actor and playwright, and it makes me so proud and happy that he is pursuing his artistic passion, and to see the enjoyment and contentment it brings him. I wish I had devoted as much time and energy to my writing when I was his age, and had his self-belief.

If you're an aspiring author and you're really serious, you need to find a way to fit your life around your writing not try to squeeze writing into your life.

I'm a mad golfer and that's another thing I like to do when I travel.

I give writing tips and feature other creators at http://deescribewriting.wordpress.com

I also provide writing tips for kids and run online classes at http://writingclassesforkids.com

Dee White wanted to be a writer since she was 7 years old, and has now published 16 books for children and young adults. She has 2 new releases due out this year. Dee has been lucky enough to combine her loves of writing and travel into a career that takes her all over the world writing, researching, and presenting workshops. Dee is also a certified writing teacher and mentor, passionate about encouraging new authors. She recently returned from Paris where she spent a month researching for her latest book, Beyond Belief, about Muslims at a Paris mosque who saved Jewish children during WW2.
Labels: Author Spotlight Dee White