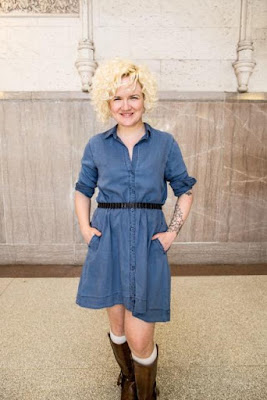 Today we are excited to feature YA author Miriam McNamara and her highly anticipated debut novel, THE UNBINDING OF MARY READE (Sky Pony Press, June 18, 2018).

Enter to win a copy (available after release)! 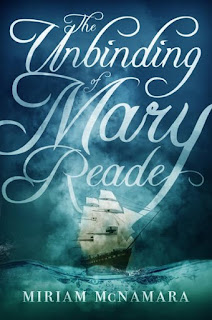 I was an avid reader of fiction when I was a kid, often reading a book a day. In middle school, I won The Bookworm Award at the end of seventh grade. I was a huge nerd! But when I realized I was queer in high school I began looking elsewhere for insight—in peers and mentors and nonfiction—because that wasn’t something I had ever seen represented in fiction I read.

But my first love was always fiction, and when I became a writer as an adult, I gravitated toward writing books that would have appealed to me as a younger person, while including the characters and themes and relationships that were missing from the stories I read back then.

Congrats on your book, THE UNBINDING OF MARY READE. Tell us about it and what inspired you to write it.

Thank you so much! It’s based on the true story of a Mary Reade, who was part of Jack Rackham’s pirate crew in the early 1700s along with another girl, Anne Bonny. I’ve always loved pirates.

Although they are often portrayed as villainous, at all points in history pirates and other outlaws exist in a world full of people getting away with wrongdoing that’s sanctioned by the state or sanctioned by their privilege.

I wanted to write a story about the gray areas of power, morality, sexuality, gender, and love. These things we’re told are black and white—right or wrong, gay or straight, male or female, truth or fiction—in truth are all shades of gray. They all exist on a spectrum, and they all need context to be understood. And I also just wanted to write a really romantic, star-crossed queer love story, and Mary and Anne’s story was ripe for that!

How long did it take you to write this novel?

I’ve been working on this novel since 2009, although I wasn’t focused solely on this story during those years. I also wrote another LGBTQ historical fiction that will be coming out from Sky Pony Press next year.

THE UNBINDING OF MARY READE is the first novel I ever tried to write, so I had a lot of learning to do along the way, but I’m so thrilled about what it’s become! It’s incredible to me that the book became exactly the book I wanted to write all those years ago when I first became inspired to write it.

I am working on a fantasy novel! Fantasy was my first love as a young reader, so I’ve always wanted to try my hand at it. All of the world-building is intimidating, but I’m really excited to finally be taking the plunge.

Find a writing community. I’ve never figured out if I’m introverted or extroverted, so having a social aspect to my passion for stories—community and friends that developed around my love of reading and writing—has kept my love fresh and helped me through the hard stuff.

Getting published is a long game, and it’s easy to get discouraged by rejection. The absolute best way to stay optimistic is to talk with other writers about their experiences. All writers, even the wildly successful ones, are intimate with rejection. For me, it is essential to get that “I’m not alone” boost to help lift me through, and that comes from connecting with others.

And it’s also essential for me to get feedback on my writing from other people. It’s hard to have perspective on your own work, so having people you trust give you kind, honest feedback on your work is one of the best ways to improve your craft.

I am really phenomenal at doing interpretive dance to 90s pop music, especially early Britney Spears. Invite me to your wedding reception and I will show you. I promise, your mind will be blown!

Miriam McNamara was born in Ireland, raised in the Southern US, and is a new resident of the Midwest. She has dressed up as some variation on pirate for Halloween more years than she has not—her favorite still being Rollerskating Pirate, circa 2003. She has an MFA from Vermont College of Fine Arts, where The Unbinding of Mary Reade won the Norma Fox Mazer Award for a YA work-in-progress. She lives in a cozy little house in Minneapolis, but she also calls Asheville, North Carolina home.