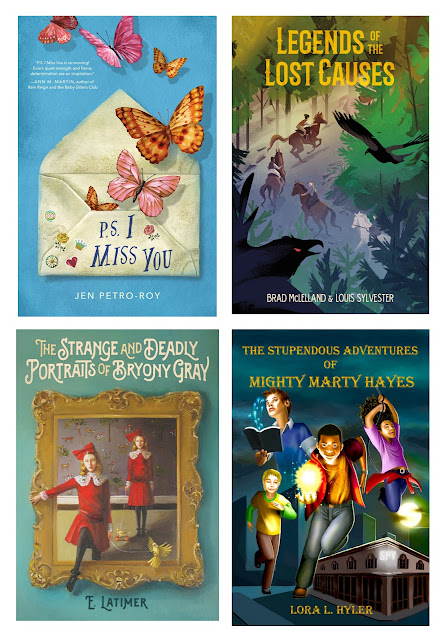 We are also excited to host a joint MG spotlight on four debut MG novels and their authors:

Enter to win all these books! 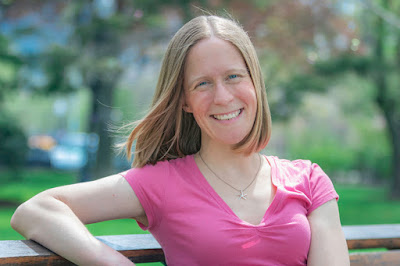 Author of P.S. I MISS YOU (Feiwel & Friends)

About your book & what inspired it: P.S. I MISS YOU, told entirely in letters, is the story of twelve-year-old Evie, who belongs to a very Catholic family and whose beloved older sister Cilla left home after getting pregnant at sixteen and fighting with their parents. As Evie writes letters to Cilla about her life and her friends, she starts to realize that she may have a crush on her new friend June. I was inspired to write P.S. I MISS YOU after picking up a battered copy of DEAR MR. HENSHAW at my local library's yearly book sale. I hadn't read it since I was a kid, but it made me remember how much I love books told in letters. And the rest is history...

Favorite classic MG: I can't even tell you how many times I've read THE WESTING GAME. The combination of Turtle Wexler's sass, brilliance, and vulnerability combined with an ingenious mystery gets me every time. I read this book as a kid, as a teenager, and as an adult, and every time, I see something different and pick up on new levels of author Ellen Raskin's brilliance. I'd love to write a mystery of my own one day!

Favorite recent MG: I was a huge fan of Karina Yan Glaser's THE VANDERBEEKERS OF 141ST STREET. I got such a Penderwicks/All of a Kind Family vibe from the close-knit family, and the determination of the siblings to save their apartment was so inspiring.

One thing most people don't know about you: Hmmmm. I'm a pretty open book, but I do have double-jointed elbows. It freaks my husband out when I demonstrate it!

Where to find you online: ou can find me in lots of places! My website is jenpetroroy.com, I'm on Twitter as @jpetroroy, Instagram as @jpetroroy, and on Facebook at https://www.facebook.com/JenPetroRoy/. And yes, I do find time to write in as I bounce between those places!

Jen Petro-Roy is a former teen librarian, an obsessive reader, and a trivia fanatic. She lives with her husband and two young daughters in Massachusetts. P.S. I MISS YOU is her debut novel. 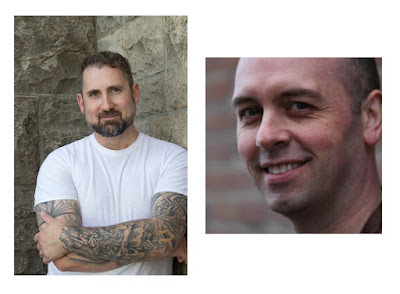 Authors of LEGENDS OF THE LOST CAUSES (Henry Holt)

About your book & what inspired it: LEGENDS OF THE LOST CAUSES is a MG Western Fantasy that combines the adventurous spirit of The Goonies with the raw, gritty realism of Louis L’Amour and the dark thrills of The Walking Dead. Set in 1855 Missouri, this first book in a series tells the story of 13-year-old Keech Blackwood, who seeks vengeance upon a deadly desperado obsessed with retrieving an ancient, magical relic known as the Char Stone.

LEGENDS comes from a strong desire to give young readers a book that we ourselves would have cherished at their age. We hope they love it as much as we’ve loved writing it.

How did you come to collaborate on this book?
Brad: The partnership on LEGENDS began, really, as a pleasant surprise. Louis and I had both been graduate students at Oklahoma State University in Stillwater, and we would sometimes run into each other in creative writing classes or at social get-togethers. One afternoon in Summer 2010, we attended a friend’s birthday party and started chatting over sodas about what we liked to read. During our conversation, we discovered that we both loved reading fantasy and Wild West fiction -- particularly books like TRUE GRIT that features a kid MC with a heart of gold. We also discovered that we both wanted to write exciting adventure stories of our own. I pitched a small concept about a dark outlaw and a posse of orphans to Louis, and he started tossing out the coolest, most surprising ideas. We met a few more times at local restaurants and coffee shops to swap notes, and very quickly we came up with the initial plotting for LEGENDS. Our story was so intriguing to us, even after Louis moved across the country to Idaho, we continued to work with each other online, passing draft chapters and revision notes and series ideas back and forth. We haven't stopped since.


Louis: I grew up reading MG science fiction and fantasy books such as ENDER'S GAME by Orson Scott Card, FARMER IN THE SKY by Robert Heinlein, and in later years (of course) the entire Harry Potter series by J.K. Rowling.


Brad: Growing up I was always a massive fan of Robert Arthur Jr.’s THE THREE INVESTIGATORS. The series followed the adventures of three junior detectives named Jupiter Jones, Pete Crenshaw, and Bob Andrews. I still read The Three Investigators to this day. I also greatly love Jack London’s THE CALL OF THE WILD (published by our very own book family, Macmillan!)


Louis: My favorite recents are books by Neil Gaiman including THE GRAVEYARD BOOK, CORALINE,and THE OCEAN AT THE END OF THE LANE.


Brad: I’ve had the privilege of reading some fantastic 2018 MG titles. I’ve thoroughly enjoyed Tae Keller’s THE SCIENCE OF BREAKABLE THINGS, as well as THE LAND OF YESTERDAYby K.A. Reynolds. I’m also a big fan of the BARTIMAEUS SEQUENCE by Jonathan Stroud.

One thing most people don't know about you:


Louis: I’m a collector of tabletop role-playing game rulebooks. RPG rulebooks can be as thick as 300 pages, but I love to flip through them and read different sets of rules. On occasion, I get to play some of these games (like Dungeons and Dragons), but most of my games’ rules will never be played – yet I’ll still keep reading them!

Brad: Let’s see. I can whistle and hum at the same time (which makes me sound a bit like a robot). Also, one time I left a page of poetry at the grave of my favorite poet, W.B. Yeats, at Drumcliffe Church in County Sligo, Ireland. I wonder if he ever read it ...

Where to find you online:
Louis: I’m not currently easy to find online. I’m signed up on Twitter @louisnsylvester, but I rarely visit or post there.

Brad: Folks can visit me at www.bradmcbooks.com; or they can follow me on Twitter @bradmcbooks, and on Instagram @bradmclelland. I’m a little easier to spot than my super-secret cohort, Louis.

Brad McLelland was born and raised in Arkansas and worked as a crime journalist in the South before earning his MFA in creative writing from Oklahoma State University. A part-time drummer and singer, Brad lives in Oklahoma with his wife, stepdaughter, a mini-Aussie who gives hugs, and a chubby cat who begs for ham.


Louis Sylvester is a professor at Lewis-Clark State College in Lewiston, Idaho. He earned his PhD from Oklahoma State University. He enjoys playing tabletop games from his collection of over 1,000 card and board games, watching western films, reading fantasy novels, and spending time with his wife and two dogs. 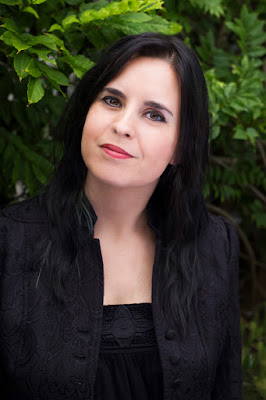 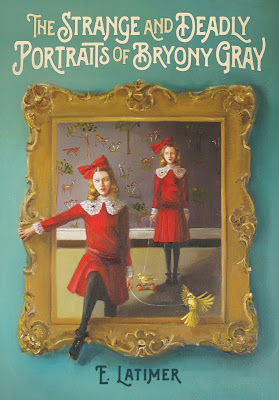 About your book & what inspired it:  I've always loved Oscar Wilde. Especially his, PICTURE OF DORIAN GRAY. I've always been taken by the idea behind the story (a weird, haunted portrait that lets you live forever? Sold!) so I wanted to do a spooky, MG spin on the tale.

Favorite classic MG: I love everything by Roald Dahl, and I grew up reading as much Enid Blyton as I could get my hands on. A few years back I discovered Diana Wynne Jones and I truly wish I'd known about her books as a child, I would have loved them.

Favorite recent MG: I recently read CUCKOO SONG, by Frances Hardinge, which was clever and creepy and fantastic. Hardinge is, in my opinion, a true genius. All her books are an automatic buy for me.

One thing most people don't know about you: If you follow my Instagram, this won't come as a shock exactly, but I’m sort of obsessed with witches. I love witch books, movies, TV shows. Anything and everything.

E. Latimer is a MG/YA fantasy writer who was born and raised in Victoria, BC. While she's not writing books, she makes silly vlogs with the YA Word Nerds about writing and reads excessively. Her middle grade gothic fantasy, The Strange and Deadly Portraits of Bryony Gray is coming out from Tundra Books in Spring of 2018. 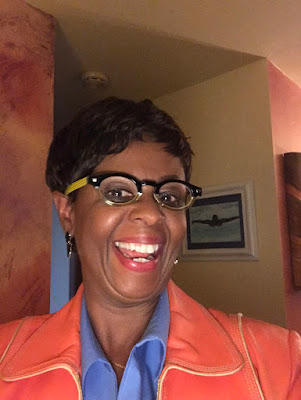 About your book & what inspired it: My son, William was my inspiration for the novel. I’ve always loved adventure stories. I combined multicultural superheroes, with a love of science and spy gadgets, added a dash of American Civil Rights and spy history, and voila! THE STUPENDOUS ADVENTURES OF MIGHTY MARTY HAYES was born.

Favorite classic MG: My two favorite childhood books were PIPPI LONGSTOCKING by Astrid Lindgren, and CHARLIE AND THE CHOCOLATE FACTORY by Roald Dahl.

Favorite recent MG: I walked into an indie bookstore in Madison, Wis. to buy T.H.U.G., and a young store clerk steered me to THE GIRL WHO DRANK THE MOON by Kelly Barnhill. It turned out to be a great selection. I loved it and Barnhill just won the 2017 Newbery Medal.

One thing most people don't know about you: I’m planning to visit the world through artist and writer residencies. To date, I’ve been selected for the Noepe Center for the Literary Arts, Martha’s Vineyard, Mass. (twice); CAMAC Centre d’Art, Marnay-sur-Seine, France; Write on Door County, Sturgeon Bay, Wis.; and Cassis Artist Residency in Cassis, France.

Lora Hyler began her career as a journalist, and corporate communications manager, and in 2001, founded her own public relations and marketing company. She’s thrilled to debut her first middle grade novel, the first in a three-part series, and plans to get the books in the hands of children of all colors.