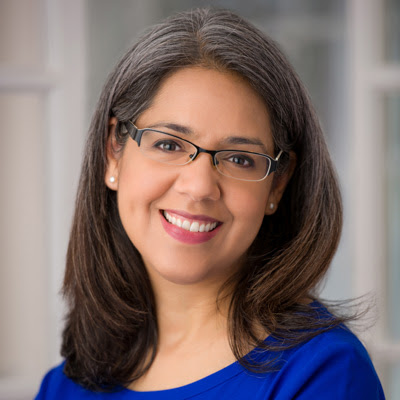 
Today we are excited to feature debut author, Patricia Valdez! Be sure to enter to win a copy of her debut PB
JOAN PROCTOR, DRAGON DOCTOR: THE WOMAN WHO LOVED REPTILES, illustrated by Felicita Sala (Knopf Books for Young Readers, Mar. 13, 2018)! 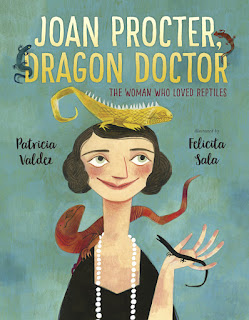 Thanks for having me! In addition to being a children’s book author, I’m also a scientist, a wife, and a mother of two. I live in Maryland (in a suburb of Washington D.C.) and work at the National Institutes of Health.

Growing up, I always loved reading. I also loved making tiny books with small spiral notebooks. In college, I studied Microbiology, but I also wrote articles about bands for a small newsletter. Though I worked in research labs during college, I had fleeting dreams of writing for Rolling Stone magazine. When I went off to grad school, my writing focused on science subjects (Immunology). There was little time for anything else, to tell the truth!

Many years later, after having two children, I began to write stories for them. I wrote about the tiny armies inside our bodies (aka the immune system). As I was beginning my writing career in earnest, I decided to tell the kind of stories I would have loved as a child - stories of women scientists.

Congrats on your debut picture book, JOAN PROCTOR, DRAGON DOCTOR. Tell us about it and what inspired you.


JOAN PROCTER, DRAGON DOCTOR came about largely because of the National Zoo’s Komodo dragon. My family visited him often at the zoo, and I read articles to learn more about these fascinating reptiles. One article briefly mentioned that Joan Beauchamp Procter was the first person to describe Komodo dragons in captivity in the 1920s. I immediately had to learn more about this woman. I found out that she cared for reptiles her entire life, since she was a little girl. She also designed a state-of-the-art Reptile House at the London Zoo, which is still in use today. Plus, she pioneered new techniques to perform surgeries and care for the reptiles. She even took a Komodo dragon for walks around the zoo and helped dispel the myths surrounding these animals.


Was your road to publication long and windy, short and sweet, or something in between?

I started writing for children about four to five years ago, and I found my agent almost three years ago. JOAN PROCTER was the first manuscript we submitted to publishers, and we ended up with a five-house auction. I would say my road to publication was a pretty straight path, not too long and not too short. But that was the first manuscript. We’ll see how the next one goes…

I’m working on a picture book biography about a Latina scientist. I have other various projects simmering at the moment, including a middle grade manuscript.

Keep writing. Most of what you write won’t see the light of day, but you’re strengthening your writing muscles with each manuscript.

Also, remember that everyone experiences rejection so don’t let it get you down.

Be stubborn. Persist. And don’t give up!


Patricia Valdez is a scientist and author with a Ph.D. in Molecular and Cell Biology from the University of California, Berkeley. She currently works at the National Institutes of Health (NIH). Originally from Texas, Patricia now resides in Maryland with her husband, two children, and three cats. She and her family are big fans of the National Zoo's Komodo dragon, Murphy. Patricia is represented by Alyssa Eisner Henkin of Trident Media Group. JOAN PROCTER, DRAGON DOCTOR is her first picture book.