Today we are excited to feature author Tami Charles! Be sure to enter the Rafflecopter to win a copy of one of her debut MG, LIKE VANESSA (Charlesbridge March 13, 2018)! 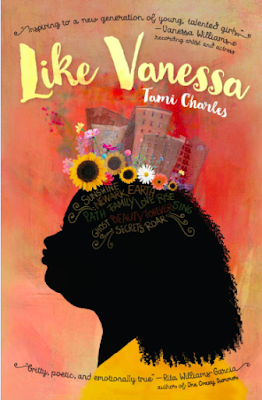 Thanks for inviting me! I’ve been writing since I was a little girl. I was also an avid reader and devoured books by Judy Blume, Beverly Cleary, and Lois Lowry! Growing up, however, I didn’t read about girls who looked like me. It wasn't until I became a teacher that I discovered the wonderful, diverse books of today. I would have begged for the books of Meg Medina, Rita Williams-Garcia, and Kwame Alexander as a child!

As a teacher, I enjoyed sharing these books (and more!) with my students. But as a writer, I was itching to reignite my passion. Thankfully, my students cheered me on as I picked up my writing habit again.

Congrats on your debut MG, LIKE VANESSA. Tell us about the story and what inspired it.

Thanks so much! When I was thirteen, I entered my first scholarship pageant. Growing up, I had always watched the Miss America pageant. The only reason why I even thought I had a chance of winning a pageant was because Vanessa Williams paved that path for so many girls of color, back in 1983. Her historic victory and grand success that followed made me believe that I mattered and stood a chance.

LIKE VANESSA was born from this merging of my childhood heroine and teen hobby of competitions. It tells the story of a thirteen-year-old girl who, after witnessing Vanessa Williams’ victory, decides to enter her school’s very first beauty pageant—even though her father and resident mean girl think she doesn’t stand a chance.

In life, there will always be someone to tell you that you’re not enough—not tall enough, not pretty enough, not smart enough. Like Vanessa (Williams) and so many other influential women who have broken barriers, my novel encourages readers to ignore the haters and walk your path.

Your debut PB, FREEDOM SOUP, also debuts in 2019. Tell us about that one.

Every New Year’s Day, my family gathers at my mother-in-law’s house to eat Freedom Soup, also known as soup joumou.

The story behind Freedom Soup is a triumphant one. When slavery still existed on the island of Haiti, slave masters would ring in the New Year by eating this soup. Naturally they didn’t grow the vegetables or even cook the soup. Their slaves did that for them.

Enter the Haitian Revolution in 1791. After twelve years of fighting against slavery, Haiti finally claimed its independence on January 1, 1804. Take a wild guess how they celebrated…

I highly suggest that if you have never eaten this soup before, visit a Haitian restaurant. Better yet, find yourself some Haitian friends and thank me later!

Has your road to publication been long and windy, short and sweet, or something in between?

How about all? When I first took myself seriously as a writer, I penned a lot of awful stories. Many have been shelved and never to be seen again, thank the good Lord himself! As I began writing stories that spoke more to my own childhood and family experiences, the writing process became more organic for me.

I wrote LIKE VANESSA for Nanowrimo in 2013, began querying in spring 2014, landed an agent that summer, revised (for a very long time), and then finally landed a book deal in fall, 2015. It also happened to be Miss America week. It was meant to be!

You write for all age groups. How do you decide when a story is meant for a particular age group (i.e. PB or MG or YA)?

Subject matter and voice drive my decision to categorize the age group I’ll write for. For example, even though my debut picture book FREEDOM SOUP deals with the topic of slavery, I felt it was better to write it for the younger set. Those type of discussions can be handled with grace, even at an early age.

With LIKE VANESSA, I knew that had to be a middle grade/early YA novel because it dealt with deeper issues of identity, racism, and faltering friendships.

What is the easiest part of writing for you? The hardest?

Right now, I’m revising the follow-up to LIKE VANESSA. In that story, we’ll explore the backstory of the bully Beatriz Mendez. I also have another middle grade novel in the works. Lastly, I have a few picture book manuscripts I need to dust off and revise.

What advice would you give to your earlier self? Is this the same advice you’d give to aspiring authors?

Advice to my earlier self? Move at your own pace, holding the vision and trusting the process along the way. And for aspiring authors, I wish them this same valuable lesson.


What is one thing most people don’t know about you?

In the 1990s, I was in an all-girl R&B singing group. We had a song that played on the radio at like two in the morning. And I’ve already said too much.

Tami’s debut picture book, FREEDOM SOUP, releases in fall, 2019 with Candlewick. She had the honor of appearing on Good Morning America, in a cooking segment, where she made a Thanksgiving version of this popular Haitian New Year’s Day soup. Tami is also the author of four more books forthcoming with Albert Whitman & Co, Candlewick, and Charlesbridge. Tami resides in New Jersey with her husband and son.