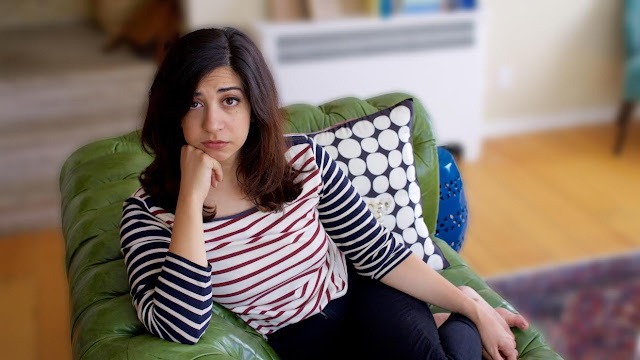 Today we are excited to feature debut YA author Aminah Mae Safi and her new book, NOT THE GIRLS YOU'RE LOOKING FOR (Feiwel & Friends June 19, 2018). Enter to win a copy!


Tell us about yourself and how you came to write for children.

My name is Aminah Mae Safi! I grew up in Houston, Texas and have spent most of my adult life in Los Angeles. I love tacos and have seen every single movie from The Fast and The Furious franchise. My favorite Sofia Coppola film is a toss up between Marie Antoinette and Somewhere. I’m here for weird cinematic references and off beat humor. I’m a sucker for heists, enemies-to-lovers (or enemies-to-best friends!) stories, and kissing books.
I came to write YA because I love to read YA. Most people like to say write what you know. I like to say, write what you love.
Congrats on your YA debut, NOT THE GIRLS YOU'RE LOOKING FOR (Feiwel & Friends). Tell us about it and what inspired you to write this.
Thank you so much! NOT THE GIRLS YOU'RE LOOKING FOR is my love story to mean girls, messy friendships, and bad decisions. It follows Lulu Saad and her three best friends during their junior year at their Texas prep school. Lulu begins fasting for Ramadan right after the story opens, which was super rewarding to get to write about. It’s also a story that showcases how much I love stories about all forms of love— friendship love, family love, and romantic love.
At its core, NOT THE GIRLS YOU'RE LOOKING FOR is a friendship story, because friendship is so central to all of our lives. I wanted to write a story that dealt with female friendships as I have known them and as I have seen them in my life: the mess and the hurt, but also the tenacity and the loyalty and the sheer force of will that those friendships often require.
Your book, that you call your "ode to mean girls, messy friendships, and bad decisions," features a bi-racial Muslim main character. What has been the reaction in the Muslim-American or Arab-American community to your book so far?
The response from early readers in the community has been positive, with readers saying that the book  made them-- and would hopefully make younger readers like them-- feel seen. At the end of the day, I wrote this book because there were so few Muslim American experiences in any format-- books, television, and movies-- that weren't about terrorists or terrorism.
So I hope I've written one story of a Muslim American teen girl and how she has to grow up and learn about forgiveness. I hope I've added to the spectrum of narratives out there about Muslim Americans. I hope she helps to complicate the idea that there is any singular Muslim American experience. But I don't think Lulu should stand in for anyone but herself. The more all readers get to see the multiplicity of Muslim American experiences-- be they Muslim themselves or not-- the better off I believe we'll all be.
Was your road to publication long and windy, short and sweet, or something in between?
It always feels long and windy, doesn't it? The best answer I have is this-- everything was slow, until it was fast. From when I started to my pub date, Not The Girls You're Looking For took seven years. I went through several re-writes, kept getting people to read it, submitting to contests and agents. Kept going back and re-writing, trying to get the story right.
I know people shelve manuscripts, and I did put this one on hold for about eighteen months while working on scripts. But in the end, I couldn't quit this story. So I went back to it, kept refining, kept editing. I think this is why I'm so big into revisions in general. Because I learned so much about writing and about story during this lengthy revision process.
I found my agent, Lauren MacLeod, through #DVpit. I signed with her in August of 2016, did a revision with her, and went on sub in October of 2016. The book sold in three weeks!
So like I said-- slow, until it was fast. There was a long time where I had no idea if this book would ever see the light of day. But I couldn't stop believing in it and it's been amazingly gratifying to see that belief and work become a published work.
What projects are you working on now?
I’m working on book two! It’s an enemies to lovers rom-com set in Los Angeles. It’s about two girls on the opposite sides of the social scale as they work on a movie together and try very hard not to fall in love with one another. It’s got everything I love— angry, messy, and ambitious girls as they struggle through figuring out what they want out of their future. I’m so excited to be working on it!
What advice would you give to aspiring authors?
Believe in yourself. Not in an ego way. Believe that even if you aren’t where you need to be yet, you’ll get there. Believe you can work on your craft until it matches your own taste level. Believe you can learn about story and get better at your art. Believe that over a long enough time line, you can get there in the end.
What is one thing most people don't know about you?
Oh, man. I learned four languages by the time I was seven!
Where can people find you online?
I’m most places @aminahmae but you’ll get the fastest response from me at that handle on Instagram! Also if you like website, mine is www.aminahmae.com— you can head over there and sign up for my newsletter and read up about my short story that’s coming out in August!
Aminah Mae Safi is a Muslim-American writer who explores art, fiction, feminism, and film. She's the winner of the We Need Diverse Books short story contest. She lives in Los Angeles, California, with her partner and two cats. NOT THE GIRLS YOU'RE LOOKING FOR is her first novel.