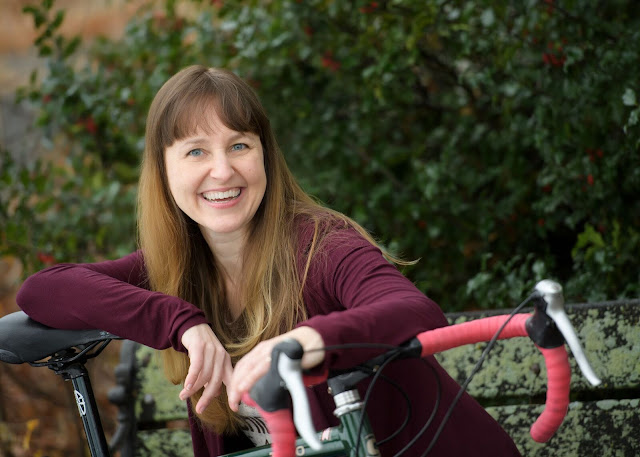 Today we are excited to feature middle grade author Christina Uss and her debut novel, THE ADVENTURES OF A GIRL CALLED BICYCLE (Margaret Ferguson Books/Holiday House, June 2018).
Be sure to enter to win a copy!

I've always loved creative writing, but it never occurred to me that I might write well enough for other people to want to read what I wrote until 200. I was working as an adventure tour guide, taking vacationers bicycling and hiking all over the western United States, and a friend and I decided once we were done with our summer tours to cycle from Vancouver to Tijuana. I ended up sending an article I wrote about the trip to Adventure Cyclist magazine and when they bought it, my mind went into overdrive: would anyone else possibly buy my writing?? My career as a freelance writer began, and I wrote dozens of articles of newspapers and magazines about everything under the sun - especially travel and bicycling.
Even though I technically grew up, I never stopped considering children's books my favorite things to read, so my husband always saw me taking out books for 8-12-year-olds from the library to read when I wasn't writing articles. The magical moment that changed everything was when he jokingly said, "Someday you're going to write a book for children."

I retorted, "Oh yeah? And what's the title of this children's book I'm going to write?"

He said, "The Adventures of a Girl Called Bicycle."
Fireworks went off in my head. "Yes! I AM going to write that book! Why is she called Bicycle? What are her adventures? I think she rides her bike across the United States." I ran upstairs and started typing and never looked back. Writing funny, fantastical, fictional stories for kids is the most fun I have ever had.
Congrats on your debut, THE ADVENTURES OF A GIRL CALLED BICYCLE. Tell us about it and what inspired you.

In one or two sentences, tell us about your book and what inspired it.

THE ADVENTURES OF A GIRL CALLED BICYCLE is the quirky story of a girl who rides her bicycle across the United States in search of her first true friend. It was inspired partly by my own group bike ride from Washington, D.C. to San Francisco as part of a fundraiser for Habitat for Humanity. I was really surprised in the best possible way on my ride by two things: the scope of natural beauty within our nation (we have the most amazing forests, farms, mountains, deserts, rock formations, and wildlife!), and the unstoppable kindness of strangers. People were always offering me food, a place to rest, a listening ear - one guy even gave me his car keys for an evening! That really informed the experiences my character Bicycle has on her journey - she's always surrounded by kindness and beauty, even when it's hard for her to see it.
I also wanted my character to be an introvert who refuses to accept any pressure that she has to become more extroverted to be somehow better or more acceptable. I'm super-proud of my own introversion, and I want all kids who prefer deep quiet and time alone to know they are perfect the way they are.

I'd say it was windy, but ultimately so sweet. I finished writing BICYCLE a loooong time ago (my twins are now eleven, and I wrote it before I ever dreamed of being a mom.) I originally tried sending it out directly to publishers, and the rejections I received knocked me for a loop. I'm really sensitive, so it felt like they were rejecting me personally, and I decided I just wasn't cut out for the emotional roller coaster of selling my book. I put the manuscript away. However, when my kids were old enough to read middle-grade books, I started thinking about BICYCLE and how she seemed as good of a story as some of the things my family read together.

I decided to learn more about being a professional writer, joined the Society of Children's Book Writers and Illustrators, and found all the support I needed. I sent out a zillion much more polished queries- this time to agents - and decided I wasn't giving up until someone said yes. Happily, Ammi-Joan Paquette of the Erin Murphy Literary Agency said an enthusiastic yes to signing me as a client! From there, it took a year to find my wonderful editor, Margaret Ferguson, and two years to publication.
What other projects are you working on now?

My next novel, THE COLOSSUS OF ROADS will be coming out in 2020, also from Margaret Ferguson Books/Holiday House. COLOSSUS tells the story of a Los Angeles boy with an eye for patterns who figures out how to secretly, successfully, and spectacularly fix all of L.A.'s worst traffic problems. He feels like one of the seven wonders of the world, until he runs afoul of equally traffic-obsessed groups who seek to tie his plans up in knots; he eventually must learn how to walk the line between feeling 100% right while working with people he’s sure are 100% wrong.

My hands-down favorite is Norton Juster's THE PHANTOM TOLLBOOTH, closely followed by Daniel Pinkwater's LIZARD MUSIC, Edward Eager's HALF MAGIC, and Jean George's MY SIDE OF THE MOUNTAIN.
Your favorite recent MG books?

Oooh, so hard to choose, there are so many fabulous MG book being published right now. My kids and I really loved Dusti Bowling's INSIGNIFICANT EVENTS IN THE LIFE OF A CACTUS - it made us laugh and made us think and made us laugh some more.

What is the best advice you can give to aspiring authors?

Never. Give. Up. My mother and father grew up speaking Polish, so they say this to me in the language of our ancestors and it sounds like an awesome battle cry. Have a plan to buoy yourself through the inevitable, ongoing rejections and criticisms that are part of becoming a published author. My plan involves liberal applications of upbeat music, mini Twixes and KitKats, and talking to fellow writer friends. Accept that it's unlikely to be easy, and do your best never to lose sight of how much you enjoy writing.

I wish I could own my own pet sloth, pet kiwi, and pet manatee and that they'd all be friends.
Where can people find you online?
Website: www.christinauss.com
Twitter: @christinauss
Blog: www.emusdebuts.com (with other fellow debut authors)
Christina Uss has ridden her bicycle across the United States both lengthwise and widthwise and worked as an adventure tour guide in fifteen states, but even more than pedaling across state lines, Christina loves books that remind us all that the world is a wonderful, weird place. She lives in East Longmeadow, Massachusetts with her twins and will always wave hello if she sees you out riding your bike.