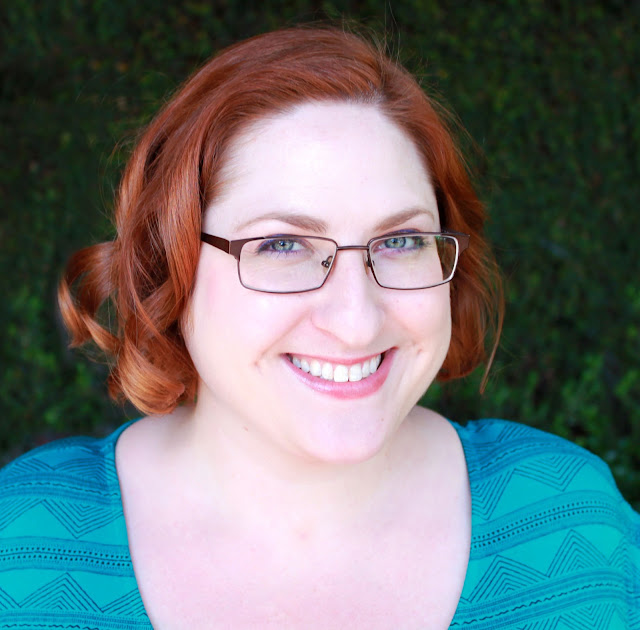 Today we're excited to feature YA author Alexa Donne, whose debut novel, BRIGHTLY BURNING (HMH Books for Young Readers) came out in May. She runs a Youtube channel for writing and publishing advice and is also the founder of the Author Mentor Match program for YA and MG authors. Be sure to enter to win a copy!

My name is Alexa Donne, I live in sunny Los Angeles (but I’m from the East Coast and miss weather), and I write YA science fiction and fantasy. I ended up writing for teens because I fell in love with YA as a reader. Like so many people, especially of my generation (Old Millennial, represent), YA didn’t exist as a category in my youth, and I grew up being required to read works primarily by dead or old white guys. I didn’t see myself represented in fiction very often, didn’t find the kind of stories I love and wanted to read (let alone write).

So when YA began to boom in the mid-2000s, I started binge reading it and felt for the first time that I could, as a woman, write about women and explore genre and tropes without being banished to the areas of publishing where women aren’t always treated nicely (this was the end of the era of “chick lit”). YA was an open door, and a community I could join.

And like so many YA writers, I still vividly recall what it’s like to be a teen, and so tapping into that is easy. I also mentor teen girls and think they are the best humans--way cooler than I am haha.

Congrats on your debut YA novel BRIGHTLY BURNING, out earlier this year. Tell us about it and what inspired you.

BRIGHTLY BURNING is a Jane Eyre retelling, set in space! Jane Eyre is one of my all time favorite novels, I love creative retellings, and I’m a massive Battlestar Galactica fan. I set myself the thought experiment of how to adapt Jane Eyre for YA while maintaining the gothic feel, and setting it in space was the solution I came up with!

It took four years, three manuscripts and two agents to get to a book deal… and then once I had the book deal everything happened very quickly! From offer to publication, it was 13 months--that is very fast for publishing. But prior to that, there were a lot of ups and downs and near misses.

From the time I wrote my first book and got an agent, it was 5 years until a book was on the shelf. And, technically: it was 10 years to publication if you count from my very first try at novel writing, which was 2008. I didn’t finish a complete draft of a book until early 2013, so that’s when I start my “timer”--but I think it goes to show that you can have many false starts before you write a book, and it can take a long time to “make it.”

In more detail: in February 2013 I finished a draft of my first complete novel, a YA sci-fi. I entered and got into two online pitch contests--Pitch Madness and The Writer’s Voice. I signed with an agent from The Writer’s Voice in October 2013. We went on sub in January 2014… and I was on sub for about a year and a half, no sale. I think I got 27 editor rejections? During this time, I worked on another book… which ended up not being a good fit with my agent at the time, and we decided to part ways. It also was in a then-dead/tricky genre of YA (so was my first one!) and I washed out querying it--agents saw this dead trope and it was an automatic no for most.

When I was at my lowest in the query trenches and feeling pretty sorry for myself, I decided to say “eff it” and write a project I’d had on the backburner for years because I didn’t think I was good enough to write it--Jane Eyre in space. I saw a small hole opening up in the YA sci-fi market, which up to that point was pretty dead, and decided to shoot my shot. I wrote BRIGHTLY BURNING in a frenzied three month period, and queried it three weeks later. I signed with my agent, Elana Roth Parker, two months later, and we went on submission that fall.

You always hope for the magical submission story--selling in two weeks! A five house auction! That didn’t happen for me haha. I got 14 editor rejections during our first round of submission… including a final one that happened at the acquisitions stage. Elana and I rallied--I did a revision in a week, and went back out on sub in early March. And THEN I had the magical experience--we had an offer from HMH a month later, in early April. All in all, I sold BRIGHTLY BURNING after 7 months on submission.

So there were ups & downs but overall I feel very fortunate. Getting an agent on my first book was very lucky. Finding an amazing second agent who knew exactly what to do with my third book, whose business style and taste aligned with my career needs--that was so lucky. There’s hard work and all that involved, but a lot of publishing is luck, and for every unlucky thing or bad timing or wrong market, I had just as many good things happen along the way. I think everything happens for a reason, and I’m very happy that my third book was my debut--everything worked out!

You've organized an amazing program called Author Mentor Match. Explain how it works, why you started it, and how people can get involved.

I’ve gotten through the craziness of publishing with the help of some amazing critique partners/writer friends. We helped each other on the path to publication. I was the super Ravenclaw among us who obsessively learned about publishing processes, agents, etc. and each time we went through something, we shared with each other. My CP Heather Kaczynski and I wanted other aspiring writers to have the same support systems and help, so we started Author Mentor Match in 2016.

AMM focuses on long term and in-depth mentorship, pairing agented and published authors with aspiring YA & MG writers. We ensure all of our mentors have successfully navigated the industry beyond querying, so they can best help other writers pursuing not just traditional publishing, but with the goal of being published by a major house (small and large included). When you join AMM, you become a part of the community, which includes a network of mentors and mentees who can offer support and advice. I personally like to help mentees with querying and with choosing an agent when they get multiple offers--which has happened for many mentees!

We have application rounds in the Spring and Fall of each year, and invite YA & MG authors with complete, reasonably polished and preferably unqueried manuscripts to submit. If you’re chosen, you’ll work with your mentor on edits, querying and beyond! You can find more information on authormentormatch.com and sign-up to get updates from our newsletter (sign-up link on website).

I’m currently editing my second book, which is Jane Austen meets The Bachelor… in space! THE STARS WE STEAL is set in the same universe as BRIGHTLY BURNING and is a standalone companion novel. It’s a retelling of Persuasion, my favorite Jane Austen book, but with a LOT of twists. There’s faded royalty, a courtship scheme, virtual reality speed dating, space walks, government plots and more!

My advice to my younger self specifically would be: don’t count yourself out with fiction. I never thought I could write a novel, that fiction wasn’t for me, because I wasn’t a pretty-prose or literary writer. YA didn’t exist as a category when I was growing up, so it never occured to me that my voice--which is very commercial, a bit journalistic, and developed in the fanfiction world--could be viable in publishing. YA changed everything for me and inspired me to try writing novels, because it’s a category that is wide open for unique, daring and commercial storytelling, especially by women, and about women.

This advice may not be useful to most, especially not younger writers, as the beautiful thing about the rise of YA, and the rise of the Internet, is that younger generations have so many examples available to them of young people (and women!) being creative and driven and successful, and a whole category of books ready-made for young and ambitious writers. I wasn’t published until I was 34, and didn’t complete my first novel until I was 29… “don’t count yourself out of fiction” was advice my 18-year-old self needed.

But generally, to everyone: don’t give up. It seems super obvious, but seriously: the key difference between an author who succeeds (in being traditionally published) and one who doesn’t is that the author who “makes it,” typically, simply didn’t give up. Rolled up into this is challenging yourself to grow, being willing and able to kill your darlings and move on from projects that aren’t working, and pushing yourself to both explore new genres & stories while also leaning into your strengths and what you love. I also advise doing your research/due diligence so you are as prepared as possible for the industry and all its ups and downs. The struggle doesn’t end when you get an agent or a book deal!

I adore disaster movies. Like, stupid popcorn movies with earthquakes and volcanoes and others weird disasters where people like The Rock save the day. I took a class on natural disasters in college where we analyzed movies like Volcano and Dante’s Peak and their “scientific accuracy.” I’ve seen every modern disaster movie imaginable and they are auto-watches for me. I’ve seen Geostorm twice haha.

Alexa Donne is a Ravenclaw who wears many hats. When she’s not writing science fiction and fantasy for teens, Alexa works in international television marketing, mentors teens and authors, and runs her growing YouTube channel. Her debut novel, BRIGHTLY BURNINGg, is a YA retelling of Jane Eyre set in space. Her next book, THE STARS WE STEAL, is Jane Austen meets the Bachelor, and is set in the same universe as her debut. A proud Boston University Terrier, she lives in Los Angeles with two fluffy ginger cats named after YA literature characters. Visit her at www.alexadonne.com or on most social media spaces @alexadonne.