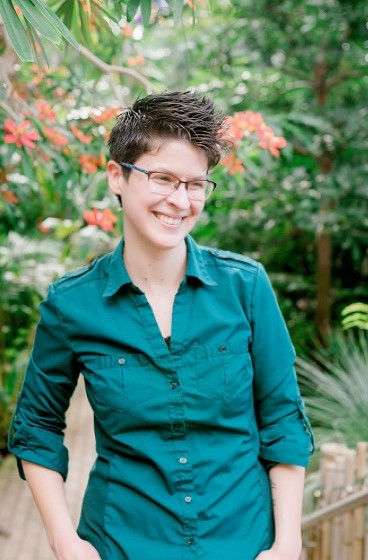 Today we are pleased to feature Naomi Hughes and her YA debut, AFTERIMAGE (Page Street Publishing). Enter to win a copy!

Tell us about yourself and how you came to write for teens.
I was raised by parents who picked up and moved every year or two--not for any real reason, just because they felt like it. It could've been a lonely way to grow up, if I hadn't been a raging introvert. But as it was, I had books, and most of the time that was more than enough.
By the time my family finally settled in the Midwest, I'd settled in turn into my favorite genres (sci-fi and fantasy) and my favorite category: young adult. I started reading those books at about ten years old and have yet to stop. I don't remember ever not knowing that I wanted to write stories too, but I do remember thinking how hard it must be to write an entire book, and how I had no idea what I was doing anyway.
When I was about twenty-five, events conspired that left me mostly jobless and super bored, which, as it turned out, were the perfect conditions to finally get me to sit down and write. And I learned that writing IS super hard, and I DID have no idea what I was doing! But I decided to do it anyway, and to do it again and again, until I finally learned enough to write a book I could be proud of. It didn't surprise me at all that what I ended up writing was the same stuff I love to read: YA sci-fi and fantasy.
Congrats on your debut YA novel, AFTERIMAGE. Tell us about it and what inspired you.
AFTERIMAGE is about a girl who, after surviving the terrorist bombing that killed her mother, gets stuck with a transparent boy only she can see. But when investigators claim her mother planted the bomb herself, our heroine realizes the boy--who might be a ghost or a figment of her own imagination--is the only one she can trust. She teams up with him to figure out what he is and to do whatever it takes to prove her mother's innocence.
So many things inspired this story! I came up with some of the science-y elements while watching Neil deGrasse Tyson's Cosmos show, and added in the panic disorder element (which Camryn struggles with throughout the book) when I myself was diagnosed with it. I also knew early on that I wanted to include some sort of ghost-boy trope--what a great romantic conflict, to fall for a boy who might not even be real.
Was your road to publication long and windy, short and sweet, or something in between?
Definitely long and windy. AFTERIMAGE was the third book I wrote, and the agent who eventually sold it was my second agent. In between the initial draft and the sale, I rewrote it from scratch three times and did many smaller rounds of revision based on feedback from agents, critique partners, and editors. It was an emotionally grueling process at times, but the final product was more than worth it!
What other projects are you working on now?
I've got two projects brewing. The one I'm drafting currently is all about bromance and OCD and murdery shadow monsters that crawl out of mirrors. It's another YA sci-fi, but it's darker and creepier and more personal than Afterimage. I can't wait for everyone to read it! I also have another beloved project on the back burner (for now), a YA fantasy trilogy involving post-apocalyptic unicorns.

What advice would you give to other aspiring authors?
Here's a quote that sustained me through a lot of rejection: "If you get rejected, don't get angry--instead, become more awesome. Write something better, and better, until we have to accept you, because we have been laid low by your tale." -Catherynne Valente
What is one thing most people don't know about you?
I'm a knitter. I don't do it a lot anymore, but when that cozy autumn mood hits, I'm liable to scrounge up a hank of pretty, soft merino wool and go to town on a scarf.
Where can people find you online?
My author website is naomihughes.net, and you can hang out with me on Twitter at @NaomiHughesYA!

Naomi Hughes grew up all over the U.S. before finally settling in the Midwest, a place she loves even though it tries to murder her with tornadoes every spring. She writes quirky young adult fiction full-time and also works as a freelance editor. In her free time she likes to travel with her husband and daughter and geek out over British TV and Marvel superheroes. You can visit her website at naomihughes.net, or find her on Twitter at @NaomiHughesYA.