Today we are pleased to feature picture book illustrator Howard McWilliam and his recent picture book, HUSH UP AND HIBERNATE, by Sandra Markle (Persnickety Press). Be sure to enter to win a copy! 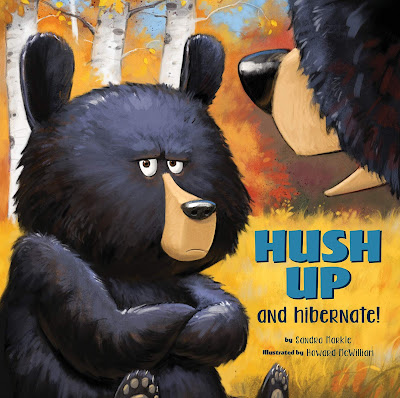 Tell us about yourself and how you came to illustrate children's books.

My route into illustration was somewhat unconventional. I began my career as a financial journalist and magazine editor in London, though I was arguably more interested in visual expression. The editor of another magazine in my office was struggling for a picture idea for his cover one week and had heard about my artistic background; he wondered if I might try something out for him. He liked it, so it was the first of many more. Before long the editors of other magazines in the building were coming to me when they too were struggling for ideas and so I built up an illustration career on the side, until I was finally able to leave my day job.

One of my magazine illustrations was of a monster, which I posted on a children’s illustration portfolio website: on this basis, I was approached by Flashlight Press to illustrate I Need My Monster in 2007. The book did well, and led to other children’s book publishers approaching me.

Congrats on your recent release, HUSH UP AND HIBERNATE. Tell us about the story & what you did to research and illustrate it.

Thank you. I had worked with Sandra Markle on a series of books for Scholastic, so when she told me she would be working on this title for Persnickety Press I knew I wanted to be involved — especially when I heard it would be about bears! I love the way Sandra blends fact with fiction, and the opportunities for visuals that this creates. In this case, the story is about Mama Bear trying to convince Baby Bear that it’s time to hibernate as she leads him through their landscape toward their den, while Baby Bear comes up with all sorts of excuses for why it’s not time yet. As a father of three young sons, I am all too familiar with such bedtime shenanigans!

The picture research was a joy, looking at beautiful photos of Yellowstone’s lakes, trees and wildlife, plus finding hundreds of pictures of black bears in various angles, poses and actions. The bears in the book are somewhat cartoonish but it was important for me to have a convincing anatomical realism and weight to them, so that they move and behave like real bears. This meant I had to understand the form of a bear underneath all that fur. In some cases where no references of a certain pose were available, watching dogs in real life was helpful, since they have many anatomical similarities.

You do both editorial and children's illustration. How, if at all, do these influence each other in your work?

I’m not so sure they illustrate each other (although occasionally I am asked to illustrate a magazine cover in a vintage children’s book style), but I really enjoy mixing the two. When I’m sick of painting politicians or serious topics in the news, it’s like a breath of fresh air to switch to the imaginary and whimsical world of children’s books. I’m sure the variety helps me to stay passionate about my work.

Be open to unconventional ‘ways in’ and try not to get disheartened. I sneaked into illustration through the back door while working on the other side of the fence in editorial: coming into contact with editors every day in the office gave a massive tail wind for picking up freelance illustration on the side, albeit for not the most scintillating titles. But as my experience and contacts grew beyond my office I realised that journalism, instead of nailing the coffin shut on my artistic ambitions as I might have suspected, had been my big break.

Another piece of advice: editors and art directors often value reliability and efficiency above artistic prowess — so always try to be punctual and never, ever miss a deadline!

I love to tap dance!
Where can people find you online?
www.howardmcwilliam.com 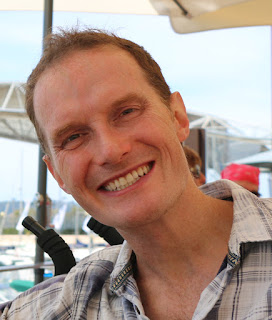 Howard McWilliam left his career as a U.K. financial magazine editor and journalist in 2005 to concentrate on illustrating. He is cover artist for The Week in the U.S. and U.K. and has illustrated dozens of children’s novels, puzzles, and picture books, including the bestselling I Need My Monster. He lives in Cheltenham, England, with his wife Rebecca and three children.
a Rafflecopter giveaway
Labels: Howard McWilliam Illustrator Spotlight