On the first of each month in 2019, we feature an illustrator who won or placed in our Kidlit411 Banner Contest, and we switch our website banner and Facebook page cover image. For the month of March, we feature Priscilla Alpaugh. 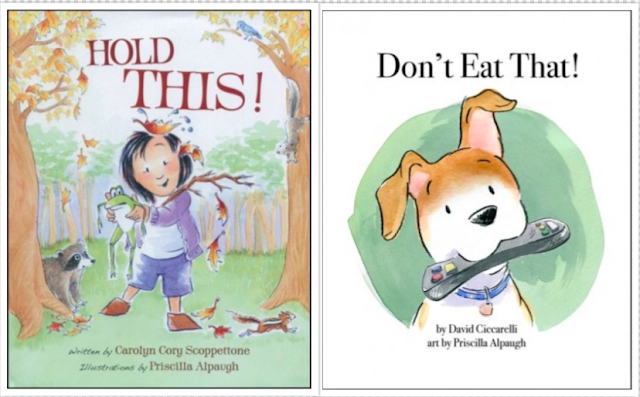 Thanks so much for asking! I’m married with two grown children living in the suburbs of Boston. My studio is in a wonderful old school building that’s about 1/2 mile from my house. My town is a rather remarkable community that features ArtSpace Maynard, which houses about 80 artists, our own movie theatre, (Fine Arts Theatre Place), Mill & Mail complex (formerly Digital Corp), a fabulous public library and a downtown filled with galleries, restaurants, and a variety of shops such as specialty foods and vintage clothing stores. We can walk to everything. A friend made a bumper sticker that sums it up nicely. “Maynard, the town that feels like a neighborhood.” I’m very lucky to live here.

Drawing was always a big part of my life. I remember being quite young and having a dream that involved an illustration of a goat. Yes, a goat. It was a really nice drawing of a goat. I felt certain I would draw it for a book one day and couldn’t wait until I got good enough to draw that goat.
I was committed to illustration all through art school. Even though my professors tried to dissuade me from pursuing children’s books as a goal. They did this on several occasions. I love the process of creating images from thin air. Give me some words and I’ll come up with some pictures. I get to create something that only I can make. How cool is that?

I was always drawing and painting in some manner or other as my kids grew up. I started to get serious about books for kids when my youngest was in middle school. Somehow, good fortune got involved and I was offered my first picture book the year my daughter graduated from high school. The book came out as she started her freshman year of college. With my kids headed off into their own lives I was finally able to dedicate myself 110% to illustration.

Congrats on your awesome Kidlit411 banner design. Tell us what inspired you and how you approached the illustration.

I loved the idea of birds on a wire, telephones, and the original meaning of 411. Back in the days of dial telephones, we actually used to call 411 for information like phone numbers, I think 611 was for the time and there was another for the weather.

Yes, I’m that old! Now, now, don’t be an ageist. I may be older than your average illustrator but we truly do improve with time (and practice). Anyway, thinking of that led me to realize I had to have a bird on a dial phone. After that it was just playing with cell phones and birds!

I drew the banner on my iPad Pro in Procreate. I wanted something colorful and simple in order to catch people’s eye.
What is your illustration process (medium, etc.)?
While the banner was 100% digital, I use a combination of traditional and digital in most of my work. I sketch things on copier paper and scan them into my computer.

I’ll manipulate the line work and then print it out at an appropriate scale. I then put the line work on my light box and lay watercolor paper over it. I paint one or more layers of watercolor and then scan those into the computer.


I use a variety of stored scanned textures as well, layering them with different colors and different opacities. I have an image in mind that looks traditional but I get there with digital techniques.

What projects are you working on now?
I’m currently working on a series of chapter books, a commercial illustration project and I’ve just started working on a picture book for Albert Whitman and Co. It was written by Lori Haskins Houran and tentatively titled SPACE MICE.

What is one thing most people don't know about you?
I don’t think I have any interesting hidden secrets but few people know my Dad worked for the CIA in aerial reconnaissance which was the most important national security program at the time. The cameras took photographs of the entire earth’s surface and provided proof that the Soviet Union did not have as many missles as they claimed. Talk about a secret! That program was called Corona. I didn’t know exactly what my father did until the program was declassified by president Clinton in 1992. 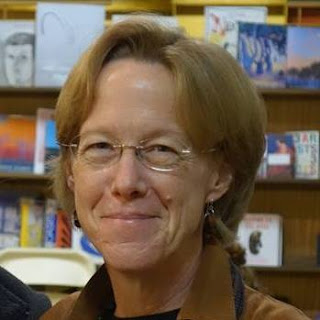 Priscilla studied Illustration at Mass College of Art and UMass Amherst and did her graduate studies at Syracuse University.  While raising her family she made art whenever she could. She moved into a studio at ArtSpace Maynard in 2001. While her kids grew up she did logo design, murals, painted traffic signal boxes, made t-shirts and greeting cards and did several book projects for self publishing clients. As her kids moved on to college she started illustrating full time. Her first picture book came out in 2015 and she won the NESCBWI Portfolio Showcase the same year. She lives in Greater Boston with her husband. They have two grown children.
Priscilla is a member of the New England Society of Children’s Book Writers and Illustrators, the American Society of Bookplate Collectors and Designers and is the New England Representative for the Graphic Artist’s Guild.
She loves New England and everything about it. Her other interests are cooking, sea kayaking, hiking, the outdoors and pretty much all animals. Corgis in particular.