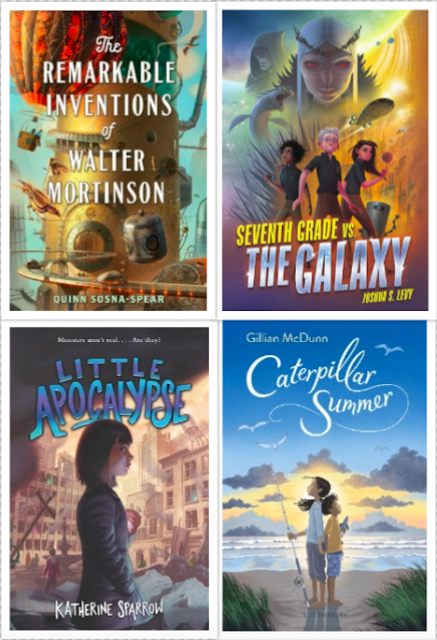 We are pleased to feature four amazing debut MG authors in our March joint spotlight:


Enter to win all four books! 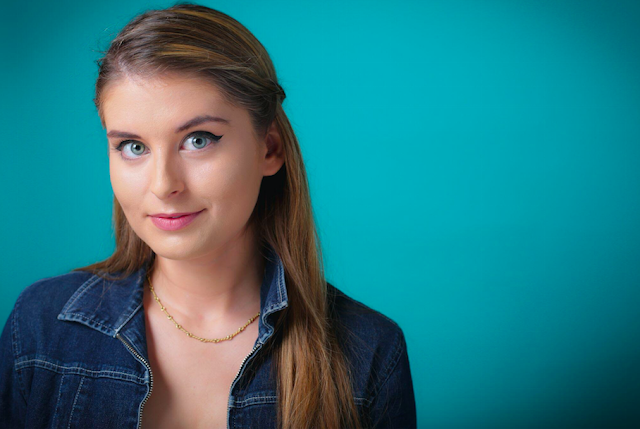 About your book & what inspired it: THE REMARKABLE INVENTIONS OF WALTER MORTINSON was inspired in equal parts by the impact my mother's death had on me as a teenager and my love of dark and whimsical fantasy. When I wrote the story, I was still in the wake of her passing and I created this world as a way to both escape and overcome.

Favorite classic MGs: Top Five in no particular order! HOLES, Louis Sachar; THE GIVER, Lois Lowry; WALK TWO MOONS, Sharon Creech; THE GIGGLER TREATMENT, by Roddy Doyle; and, of course, HARRY POTTER AND THE SORCERER'S STONE
Favorite recent MGs: Oh man, there are so many, but I'll give you a snapshot Top Five! JUST SOUTH OF HOME, Karen Strong; THE BOY, THE BOAT, AND THE BEAST, Samantha M. Clark; A GOOD KIND OF TROUBLE, Lisa Ramee; THE DRAGON WARRIOR, Katie Zhao; THE TRUE HISTORY OF LYNDIE B. HAWKINS, Gail Shepherd
One thing most people don't know: My name, "Quinn," means five, and each of my names has five letters: Quinn, Inger, Sosna, and Spear. When I was a kid I ONLY had crushes on other kids who had five-letter last names because I wanted to tag theirs onto mine when we got married to make the ultimate five-name-five-letter title.
Where to find you online:
House: https://www.quinnsosnaspear.com
Work: https://www.goodreads.com/author/show/17929865.Quinn_Sosna_Spear
School: https://twitter.com/Qsosnaspear/
Playground: https://www.instagram.com/qsosnaspear/

Quinn Sosna-Spear was named a California Young Playwright at seventeen and went on to study at the University of Southern California. She has since written books, films, and virtual reality projects. THE REMARKABLE INVENTIONS OF WALTER MORTINSON, her debut novel, was inspired by the untimely death of her own mother. Quinn hopes to share with all readers—particularly those struggling with loss—the humor, poignancy, and adventure in such things…as dreary and impossible as they may seem.

About your book and what inspired it: SEVENTH GRADE VS. THE GALAXY is about the kids going to school onboard the Public School Spaceship 118, orbiting one of Jupiter’s moons in the future. When the ship is mysteriously attacked, thirteen-year-old Jack discovers that his (recently fired science teacher) dad built humanity’s first light-speed engine into the PSS 118. To save the ship, Jack catapults it across the galaxy and into the clutches of the first aliens any humans have ever seen.

As for what inspired it: SEVENTH GRADE VS. THE GALAXY is just the result of me writing the kind of book I’d have loved as a kid, and the kind of book I think some of my students would also have enjoyed. (I used to be a middle school teacher, before going to law school.) Booklist said that “this middle-grade action-adventure space opera is just plain fun.” That’s exactly what I set out to write, and I’m so so grateful that that’s how it’s also been received.

Favorite classic MGs: I’ll never tire of answering this question with: THE WESTING GAME (and everything else Ellen Raskin wrote) and WAYSIDE SCHOOL IS FALLING DOWN (and everything else Louis Sachar wrote). They’re both so clever and so hilarious—and I hope that SEVENTH GRADE VS. THE GALAXY channels at least a fraction of their fun.

Favorite recent MGs: Ah! An impossible question. I’ve got Varian Johnson’s THE PARKER INHERITANCE on the brain. And (although it’s not out yet), I recently finished reading an ARC of Nicole Panteleakos’s PLANET EARTH IS BLUE, which is so so so good. There’s also Cory Leonardo’s (recently released!) THE SIMPLE ART OF FLYING and Gillian McDunn’s (almost out!) CATERPILLAR SUMMER. Should I go on? Because I could…

One thing most people don't know: In high school, I once fell through the floor of a friend’s attic, down into their house? Does that count?

Where to find you online: I swim around on Twitter @JoshuaSLevyand you can find out more about me and my book here: https://www.joshuasimonlevy.com/sgvtg/. Thank you!

Josh was born and raised in Florida. After teaching middle school (yes, including seventh grade) for a little while, he went to law school. He lives with his wife and two children in New Jersey, where he practices as a lawyer. Unfortunately, outer space doesn’t come up in court nearly as often as he’d like. SEVENTH GRADE VS. THE GALAXY is his first novel. 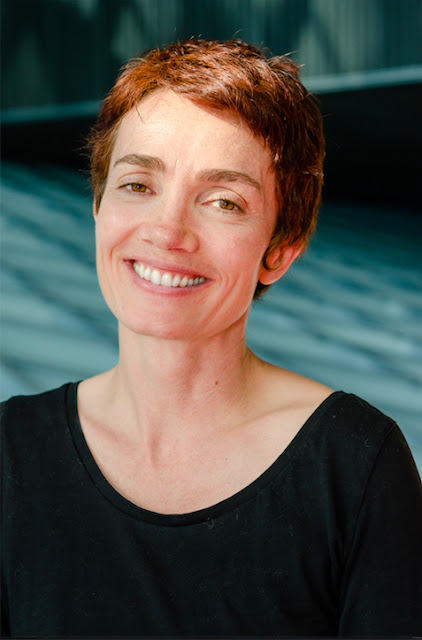 About your book and what inspired it: LITTLE APOCALYPSE starts with a sudden and strange earthquake that strands Celia's parents out of town. She finds herself on her own in a  shaken city. She tries to reach out to other kids around her apartment building. Some of them, like the sad boy named Demetri, seem wary of letting her too close. The others call themselves Hunters. They claim the earthquake was caused by monsters that only kids can see. And they think Celia is destined to save the city.

Celia doesn’t feel destined to save anything. LITTLE APOCALYPSE is full of monsters and magic, and at its core is a book about friendship and doing the right thing even when everyone tells you that's impossible.

I was inspired to write this book from a deep love of the sad truth that sometimes kids face hard and overwhelming things in their young lives. I wanted to write a book about those kinds of kids having adventures, being heroic, and being so excellent to each other they change the whole world.Favorite classic MG: The book I always come back to is A WRINKLE IN TIME by Madeline L'Engle which was the first book I can remember reading where kids, all on their own, faced an incredible and overwhelming quest to save their dad. I can still remember reading it and being so amazed at the world they stepped into and how brave those kids were. I think, as great books can, it rearranged my young mind and taught me about being a principled person who will always try to make the world a better place.Favorite recent MG: THE  LUMBERJANES graphic novel series continues to delight and amaze me. I really love the bright and unique characters, and how it has a world of diverse girls, with a wide definition of 'girl', who are up to the challenge of facing whatever monster comes their way.  One thing most people don't know: I'm an activist! Which means one of my life commitments is to try to make the world a better place. Sometimes that means going to protests and meetings and working on projects with people. Other times it means I'm thinking about the world that could be and trying to imagine how we could get their from here.Where to find you online: My website is at katherinesparrow.net, you can find me on twitter @Katie_H_Sparrow or Facebook as Katie Sparrow
Katherine Sparrow was raised in Seattle and has lived up and down the West Coast, usually in rainy and foggy milieus that are excellent at convincing her to stay home and write. She has worked as a baker, a social worker, a fundraiser for obscure yet wonderful causes, and a writing workshop coordinator. She currently lives with her partner and two young kids, who teach her to be enthusiastic about all things little and big.

About your book & what inspired it: When I write, I begin first with relationships. The inspiration for CATERPILLAR SUMMER started with the relationship between an older sister and a younger brother with special needs, modeled partly by experiences with my brother Andy. I was also inspired by my love for family, the beauty of the North Carolina coast, and the belief that summer is a time where regular routines get shaken up a bit.

Favorite classic MGs: As a kid, I was a voracious reader, so I’ll limit myself to the three books I re-read most often: DANNY, THE CHAMPION OF THE WORLD, by Roald Dahl, WHERE THE RED FERN GROWS by Wilson Rawls, and THE LION, THE WITCH, AND THE WARDROBE, by C.S. Lewis. All feature independent kids having adventures in memorable settings.

Favorite recent MGs:I’m lucky enough to have read many of the debuts coming out in the first part of 2019! A GOOD KIND OF TROUBLE by Lisa Moore Ramée is a wonderful story about a girl named Shayla learning all kinds of things about friendships, family, and identity. I loved this book for its characters and its thoughtful discussion about racism and activism. Another two that came out earlier this year are THE SIMPLE ART OF FLYING by Cory Leonardo, which is a multi-POV gem that centers around an especially cranky parrot named Alastair, and SEVENTH GRADE VS. THE GALAXY by Joshua S. Levy, a high-octane science fiction romp full of laughter, adventure, and friendship. Another of my favorites that will be out soon is MIDSUMMER'S MAYHEM by Rajani LaRocca, which is a mashup between A Midsummer Night’s Dream and kids’ baking competition shows. I could easily go on! 2019 is a fantastic year for middle grade!

One thing people don't know: Even though I wrote a book about fishing, I never went fishing as a kid. My first experience with fishing was about six years ago, after I moved to North Carolina. Here, it’s easy to access the ocean, lakes, and rivers. Even neighborhood ponds are stocked with fish!

Where to find you online:  I can be found at www.gillianmcdunn.comor on Twitter/Instagram @gillianmcdunn. Please drop by and say hi!

GILLIAN McDUNN has lived in California, Missouri, and North Carolina, and is a fan of both the Pacific and the Atlantic Oceans. She lives near Raleigh, North Carolina, with her family.​ Like Cat, Gillian grew up as the big sister to a younger brother with special needs.​ Her debut middle-grade novel CATERPILLAR SUMMER (Bloomsbury) will be released April 2, 2019.