Today we are pleased to feature author-illustrator Christopher Silas Neal and his book, HOW DO I LOVE THEE, by Jennifer Adams (Balzer + Bray 2018), a re-invention of Elizabeth Barrett Browning's Sonnet 43. Enter to win a copy! 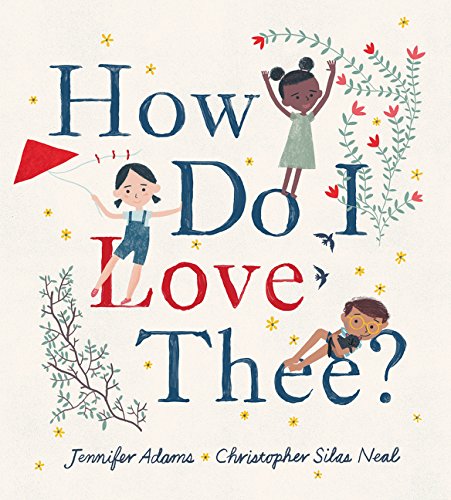 Thanks for having me! I've been an illustrator for about 17 years and got my start making editorial images for magazines and Newspapers. The New York Times and the New Yorker gave me some of my first assignments. I eventually branched out to book jackets, posters and advertising, too.

My life and career changed when Chronicle Books gave me a call. They had seen my work for magazines and book covers and were looking for a non-traditional artist to work on a nonfiction picture book called OVER AND UNDER THE SNOW by Kate Messner. That was in 2009. I've been making picture books ever since. Kate and I are currently working on our fifth book together which is about a desert canyon. We have a book called OVER AND UNDER THE RAIN FOREST  which comes out in Spring 2020.

I'm a self-taught artist and before moving to Brooklyn, I studied music at the University of Colorado. I eventually switched majors to journalism/communications and took a design elective my last semester of school. The teacher of that class gave me a job at his small graphic design studio. I learned on the job how to be a visual thinker and that led to me eventually wanting to try illustration.

As a kid I was always drawing, playing music, and just being creative. I was born in San Antonio, Texas in the late 70s. Like a lot of people in South Texas, I'm mixed race Mexican-American. My mom was a single parent so we moved to several places including Mississippi, Louisiana, and Georgia all before I was four. We didn’t have a lot of money and we lived in a trailer park, various apartments, stayed with friends and family and there were a few times when I didn't know where we would sleep. We finally landed in Florida where I lived until the age of 13. Then we moved to Colorado.

Congrats on your recent book, HOW DO I LOVE THEE, by Jennifer Adams. Tell us about it and how you approached the illustrations.

HOW DO I LOVE THEE is a reimagined version of Elizabeth Barrett Browning's Sonnet 43. The original piece is a Victorian ode to romance which starts with the famous line, "How do I love thee, Let me count the ways." Jennifer Adams' adaptation replaces the passion and romance for kid-friendly themes like the changing seasons.

I didn't receive any explicit direction from my editor or Jennifer Adams about possible imagery—it was a blank slate. Being a father of two boys, I initially read the manuscript as a reflection on the loving bonds between parent and child. I think that is the most obvious way to read it. At least without pictures to drive the narrative or give it a setting. But, I wanted to try something unexpected and instead interpreted the words as an ode to friendship.

It just seemed like kids would find that more interesting. I landed on these three kids who go on somewhat surreal adventures together (I think they could be read as either literal or imagination/play) while holding hands, giggling, laughing and having the time of their lives. The imagery follows the text in a playful way placing our characters in some amazing settings such as a mountain top, a deep sea submarine, and soaring through the night sky by way of kites. In other moments, they are lying in the grass, under a tree or just playing in the snow. Whether they are globe trotting or just in their backyard, these kids are like three peas on a pod.

Tell us about some of your other recent books and projects. Anything new coming down the pipeline?

I have a series of board books titled ANIMAL SHAPES and ANIMAL COLORS. The concept is sort of a mashup. So for instance in Animals Shapes: "When leaping frogs meet an Octagon, they make a... HOPTAGON". Those two books are out now and I'm working on two more: ANIMAL SOUNDS and ANIMAL NUMBERS. 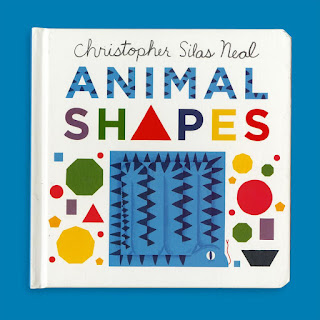 Also in the works is another reimagined poem collaboration with Jennifer Adams. Yay!

Working on HOW DO I LOVE THEE was as smooth as can be. It was published by Balzer/Bray and we had a blast making this book. It was one of those instances where everything lined up and everyone was into it.

What are the 1-2 best things you did for your illustration career? What advice would you give to aspiring illustrators?

Do what you love. To students and people that hope to jump into the field of illustration I say take risks. Take creative risks like trying something new without any guarantee you'll be good at it. Take personal risks like moving to a new city or approaching someone you'd like to meet. And finally, dream big. Let reality scale things back rather than your ambition and imagination.

I have never met my father but I've met a few important people that I love and respect and that took time care for me along the way. 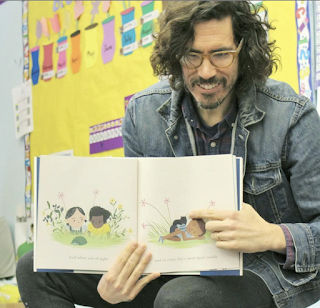 Christopher Silas Neal is an award-winning author and illustrator of picture books including OVER AND UNDER THE SNOW with author Kate Messner, which was praised for its "stunning retro-style illustrations" (New York Times), was a 2011 New York Times Editor's Choice and an E.B. White Honoree in 2012. Neal's author debut titled EVERYONE was praised by Publisher's Weekly as "simple, honest, lyrical." He creates book jackets, art for magazines and posters, and occasionally directs and designs animated videos. He speaks about his books, the art making process, and his career at schools, conferences, libraries and book festivals across the country. He lives and works in Brooklyn, NY.
a Rafflecopter giveaway
Labels: Author Spotlight Christopher Silas Neal Illustrator Spotlight