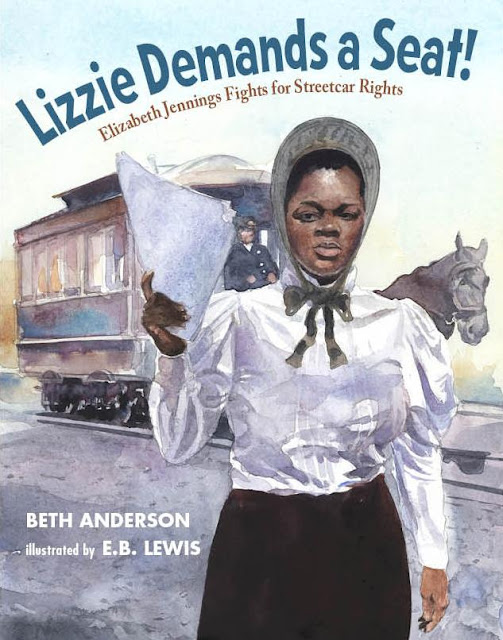 We are very excited to reveal the cover of LIZZIE DEMANDS A SEAT! ELIZABETH JENNINGS FIGHTS FOR STREETCAR RIGHTS, by Beth Anderson, illustrated by E.B. Lewis, coming out in January 2020 from Calkins Creek.


In 1854, one hundred years before Rosa Parks took her stand, Elizabeth “Lizzie” Jennings tried to board a streetcar in New York City on her way to church. Though there were plenty of empty seats, she was denied entry, assaulted, and threatened all because of her race–even though New York was a free state at that time. Lizzie decided to fight back. She told her story, took her case to court–where future president Chester Arthur represented her–and won! Her victory was the first recorded in the fight for equal rights on public transportation, and Lizzie’s case set a precedent.


Beth Anderson, author of AN INCONVENIENT ALPHABET, loves digging into history and culture for undiscovered gems. A former educator, she is drawn to stories that open minds, touch hearts, and inspire questions. Born and raised in Illinois, she now lives in Loveland, Colorado.

Lewis attended the Temple University Tyler School of Art, where, he discovered his medium of preference was watercolor. After graduating, he taught art in public schools for twelve years. Presently, E.B. teaches at the Pennsylvania Academy of Fine Arts. He is also a member of The Society of Illustrators in New York City, and an artist member of Salamagundi Art Club of New York.