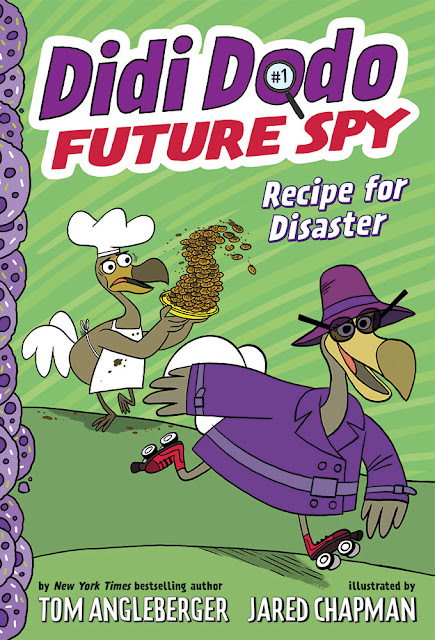 I live in East Texas with my family. My wife and I are from the same small town. We lived in Austin for a while but after we had kids, we decided that we’d like to move back home. We’re still here, and it’s been really nice. I started illustration shortly after I graduated from college. I was an animator by day and would work whatever freelance jobs came my way in the evenings. They were mostly illustration jobs and, since my drawings tend to work better for a younger audience, a lot of them were for children, which I was thrilled about.

Congrats on illustrating the chapter book, DIDI DODO, FUTURE SPYby Tom Angleberger. Tell us about it and how you approached the illustrations.

DIDI DODO, FUTURE SPY is a book about a bird who hopes to one day be an actual spy. In the meantime, she puts her spy skills to the work helping her friend Koko Dodo solve the mystery of his missing super secret fudge sauce. This book is a spin-off of Tom and Cece Bell’s Inspector Flytrap series. In those books, Cece created this fantastic world. Being able to look at her illustrations was really helpful when I started sketches since it allowed me to add to that world instead of creating it from scratch. It’s like starting a race halfway to the finish line instead of at the blocks. At the same time, Cece had created all these great character designs which I knew I wouldn’t be able to replicate very well. My solution to that problem was to keep the overall design of Cece’s characters but redraw them the way I normally would, hopefully achieving some sort of happy medium.

Probably something in between. I had always loved picture books but never really thought that it was something that I would ever do. Like I said earlier, I was working in animation so I figured that’s what I’d do for the rest of my career. One day I met this guy named Bob Shea. He was hilarious and, interestingly enough, was just about to have his very first picture book published. We stayed in touch and he kept telling me that I should give it a shot. It took a few years but I finally took his advice and sent out a dummy that was passed on, but, a few months later, I was put in touch with an agent named Rebecca Sherman, who took me on as a client. With her help, we polished up a new dummy, sent it out, and it was purchased. That was in 2012 and, honestly, I still can’t believe it.

I’ve been really fortunate to work with authors who are absurdly talented and funny. At the moment I’m illustrating the third Didi Dodo book. All three books in the series are great, but this one is my personal favorite. Tom really outdid himself on it.

I’m also working on a new picture book with Jory John. It’s about a kid who blames all of his stuff for the things he does. It’s hilarious because, as the dad of kids and a former kid myself, it’s very relatable. I’m about to start illustrating a new picture book by Ethan Berlin that is about a toy who has big plans for his future and being a dog toy is not one of them. It’s super, super funny and every time I read the manuscript I laugh out loud.

Draw a ton. The more you do it, the better your drawings will become. Read books, watch movies, and pay attention to everything around you. It will help you in your work. Most importantly, have fun!

When I was in junior high, I started wearing baseball caps. It’s a habit that stuck with me all through high school, college, and even till this day. I don’t leave the house without one because if I did, it just feels weird. Like if you walked outside without pants on. Also, I still wear a cap that I’ve had for 23 years. It’s not as disgusting as you’d think, only a little gross. 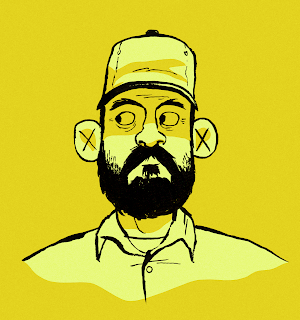 Jared Chapman is the author-illustrator of the bestselling VEGETABLES IN UNDERWEAR  as well as FRUITS IN SUITS  and PIRATE, VIKING & SCIENTIST. He lives in Texas.
Labels: Illustrator Spotlight Jared Chapman