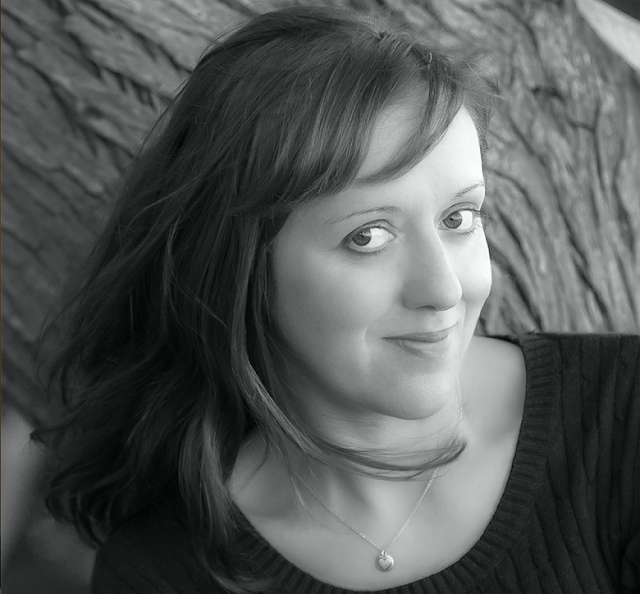 Today we are excited to feature author Stephanie V.W. Lucianovic and her debut picture book, THE END OF SOMETHING WONDERFUL: A PRACTICAL GUIDE TO A BACKYARD FUNERAL, illustrated by George Ermos (Sterling Childrens Sept. 2019). Enter to win a copy! 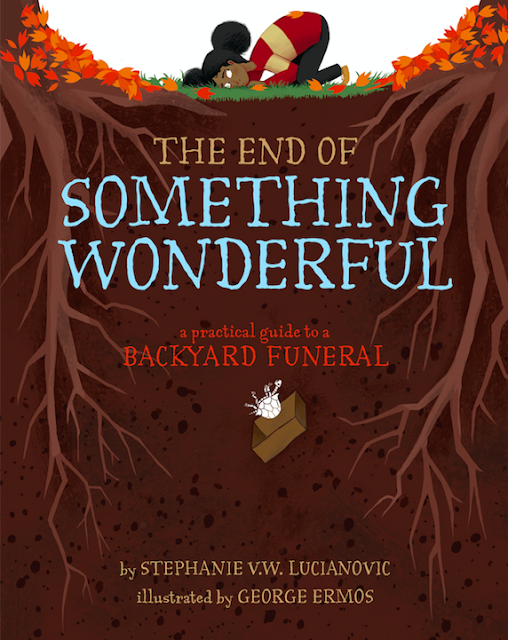 I have been a writer for nearly two decades but writing children’s books is something I’ve only been doing in the past five years. Before children’s books, I wrote about TV, pop culture, food, cheese, and picky eating for a variety of outlets, including for newspapers, magazines, and online sites. In 2012 I published my first book with Tarcher-Perigee — Suffering Succotash: A Picky Eater’s Quest to Understand Why We Hate the Foods We Hate — and figured I was done writing books. I had proved I could write one and I didn’t need to do it again. I also sort of didn’t want to do it again because, for me, that entire process was so stressful and I was constantly filled with self-doubt and fear.

But after my second son was born, I discovered more and more picture books that were brand new to me and I was utterly enchanted by how different they were from the ones I had grown up with. When I read Julie Fogliano’s AND THEN IT'S SPRING, I fell head over hells in love with the writing. It was unlike any other picture book I had ever read. After that, I wondered if I too could write myself into the world of picture books. And so I did.

Congrats on your debut picture book, THE END OF SOMETHING WONDERFUL: A PRACTICAL GUIDE TO A BACKYARD FUNERAL. Tell us about it and what inspired it.

Thank you! My book is a set of practical advice, instructions, and empathy that walk children through the grieving process after the loss of a pet. It came about because I had been trying to capture a pet death story that was personal to my family at the time. But I was also trying to find a way to tell it in a way that hadn’t yet been done.

After many failed attempts, I finally cast myself back into my own childhood to remember what was important to me and my older sister when a pet died. Back then, our family cats weren’t cremated. Instead, they were buried in my parents’ backyard and my sister and I had funerals for them. I realized that in cremating our family cats now, we had taken that part of the grieving process away from our own two kids and it was something I wanted to explain to them.

You have another forthcoming picture book too. Tell us about it.

My next book is called HELLO, STAR and it’s with Vashti Harrison and being published by Little Brown Books for Young Readers in Spring 2021. That book is about what happens when a young girl learns a star is dying (going supernova) before her very eyes and how it propels her on a path that will define her life’s work.

The idea for that book was 100% straight from my oldest son’s heart. When he was about six, he was obsessed with the solar system and reading everything he could about it. One night he came to me and said, “Do you know that stars die? Isn’t that sad?” And I was so touched by his emotion, it made me wonder what a child would do with that sort of empathy for a ball of gas millions of miles away. That same night I sat down and wrote the first draft of HELLO, STAR from start to finish.

It can definitely feel long and winding at times I think relatively speaking in terms of children’s publishing specifically it wasn’t. Maybe short and winding?

You see, I had initially signed with an agent for another picture book but it didn’t sell and the agent wasn’t really connecting with anything else I had shown her, so we parted ways. This was pretty devastating for me because I didn’t realize agents and clients leaving one another was pretty common. I was so embarrassed and I thought something was really wrong with me for that to happen.

Immediately after that ways parting, I wrote THE END OF SOMETHING WONDERFUL along with other stories and started querying agents again. But I really felt so strongly about SOMETHING WONDERFUL that in addition to querying agents, I sent it to the few publishers that accept unsolicited submissions. However, it was only after I signed with my current agency nine months later for a totally different book that I got contacted by an editor at Sterling. The editor had pulled my manuscript from the slush pile and was wild about it. So while I started to write Picture Books in 2015, the road to publication for SOMETHING WONDERFUL specifically hasn’t been all that long, honestly.

I do want to say that I know full well there are authors out there who have been hacking away at children’s writing longer than me and don’t have books published yet. I also know there are published children’s authors who had a very long road before their first children’s book was published. But again, part of my journey as a children’s author has to include all the years I was writing before I took up picture books. That’s nearly twenty years where I was learning how to write and every new piece I wrote —whether is was about wedding trends in Boston or  tearing apart episodes of Star Trek: Enterprise — got me closer and closer to this moment.

So, depending how you look at it, it either took 4 years to get my first picture book published or it took twenty.

I’m always polishing new picture book manuscripts and filling my agent’s inbox up with them. But she has also encouraged me to write something longer, so I’m currently working on a middle grade that and feeling my way through a chapter book series to see if I can get something going there as well.

What are the 1-2 best things you did for your career? What advice would you give to aspiring authors?

1. I broke the rules: both my upcoming picture books clocked in at 1000 words and both sold to editors. The final versions maaaaaybe came in around 900. But nothing close to the vaunted 500 everyone hammers into your head. I’m not saying every book should be 1000 words, mind you. What I am saying is that sometimes your writing can transcend the rules so don’t let them constrain you.

2. I never gave up. It’s true that my path from starting to write children’s books to publishing my first children’s book seems short but as I mentioned above, the road to this point in my life has been quite long. In the last five years, I have experienced hundreds of rejections, great swathes of despondency, and metric tons of frustration. There were so many moments that, feeling as though I was failing, I could have walked away. And I almost did. I almost gave up. But I knew that if I did, that would truly cement my failure. If I gave up, I would never get a children’s book published. Ever. So instead of giving up, I took breaks. I walked away. I let myself heal but I did keep going and it’s only because I kept going that I got my first of many future books published.

I think what most people specifically in the kid lit community don’t know about me is that I used to be a cheesemonger for Cowgirl Creamery in San Francisco. Not only did I sell a lot of delicious, stinky cheese, but I also researched and wrote up descriptions for 300+ cheeses for the company. It now resides on Cowgirl Creamery’s website and is known as the Library of Cheese. If you poke around in there, you’ll find a cheese with a Don Quixote reference in its entry.

I’m mostly on Twitter @grubreport. My Instagram handle is the same (@grubreport), but I’m still trying to figure out what one does on Instagram, honestly. I’m much better with the words, not the images. I also have a website going way back to the early 2000s at www.grubreport.com and will be launching a new author site soon.

Stephanie V.W. Lucianovic has dug many holes, cried lots of tears, and laid an entire garden’s worth of flowers on small and not-so-small graves. And she has never ever dug her Something Dead up. She the author of Suffering Succotash: A Picky Eater's Quest to Understand Why We Hate the Foods We Hate. The End of Something Wonderful is her debut picture book. Stephanie lives in Menlo Park, CA, with her two sons, two cats, and one husband.