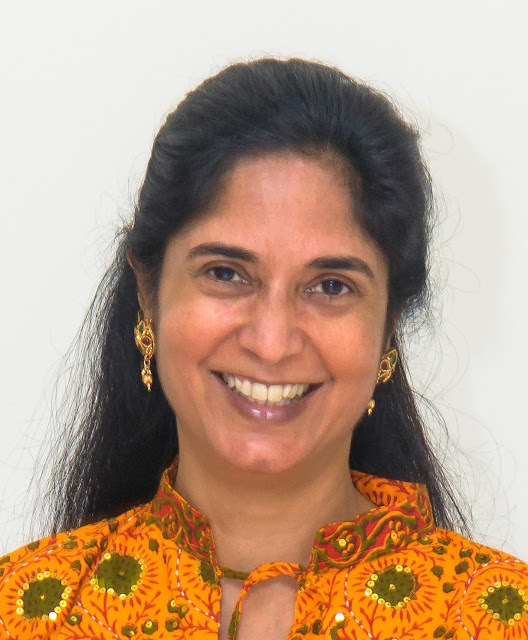 Today we are excited to feature award-winning YA and MG author Padma Venkatraman and her latest MG novel, THE BRIDGE HOME (Nancy Paulsen Books, Feb. 2019), billed as OLIVER TWIST meets SLUMDOG MILLIONAIRE, a book about homeless sisters in India who create a found family with boys who scavenge trash for recyclables.

Enter to win a classroom Skype visit with Padma!

I've heard it said that if you're unhappy with where you are in life, you should look back at a time when you were a child and consider what you wanted to become when you grew up. I can't remember a time when I didn't write. My mother kept a diary when I was young and it's filled with poems that I dictated to her as a little child - she records that I was very particular about line breaks, even at the age of four - when I couldn't actually write so well with a pencil but I was still "getting poems in my head" that I insisted she write down for me. I love writing and words - reading them, writing them, speaking them - are my life.

Congrats on your recent book, THE BRIDGE HOME, which has been highly acclaimed and chosen to be a part of the 2019 Global Read Aloud program. Tell us about it and what inspired you.

THE BRIDGE HOME begins with domestic violence, because of which two sisters run away from home. Homeless, on the streets of an Indian city, they are lucky enough to meet two boys who befriend them and help them eke out a living by salvaging recyclable material from trash. The four form a family of sorts, build a home on a ruined bridge, adopt a stray dog, and find the courage to laugh and be silly even through all the hardship. But the threat of violence hangs over them, and when the four are driven away from their fragile home, into a graveyard, their situation rapidly worsens; but they continue to battle for their hard fought freedom. The novel is written in an unusual point of view - second person / direct address - in that of one sister writing to another sister - and we discover why the two are apart and why one is speaking to the other, as the story unfolds.

The four children in THE BRIDGE HOME are never free of the spectre of violence and unfortunately, there are violent adults in my family - so my childhood wasn't easy and I had to revisit some really hard times in my life to be able to write it. But it's more than the story of my own survival. Although I did grow up without economic privilege, I had friends who had suffered far more and had even less. One of them, Indira, was a Roma girl who hid in a graveyard for months before she finally found her way to a school where I met her. She asked if I'd write her story someday and THE BRIDGE HOME is that long overdue promise. It's also inspired by some other children I knew growing up who came from incredible difficult situations - Nagabushan and Padmini, among them; and by an adult who was very dear to me and the guardian angel of my childhood, Karuppaswamy Mudaliar, who grew up in an Indian village.

Congrats also on having a poem in the upcoming anthology, THANKU: POEMS OF GRATITUDE, edited by Miranda Paul and illustrated by Marlena Myles. Were you a poet or an author first? You wrote a tanka. Tell us about it.

A tanka is a Japanese form that has been adopted by poets who write in English. I love it because it is so elegant - it has five lines and just 31 syllables (the first line has 5 syllables, the second 7, the third 5, and the last two 7 each). There's freedom and luxury in writing free verse, which I also love; but the challenge of writing poetry that forces me to create within certain limits is also something I love.

Nature or human love is often the subject of tanka poetry; and tankas were sometimes courtly panegyrics. I chose to write a sort of eulogy to the many mathematicians of color who invented and preserved and used the zero; so my tanka brings together my love of words and numbers.

Long and winding, for sure! Speaking of my love of numbers, as well as my burning desire for independence, I left home and country and went off across the oceans at the age of 19. I immigrated alone to America a little later and went to graduate school to study oceanography in Virginia when I was less than "drinking age" in that state. I kept writing articles about science for lay people and stories for magazines like Cricket and Highlights when I was in Graduate School, but it was only after working as a scientist for a while that I decided I wanted to concentrate on writing and really started to define myself as a writer and work toward it.

My novel, CLIMBING THE STAIRS, by the way, was published over a decade ago, and luckily, is still in print, for which I'm very thankful. The draft was rejected about 40 times before it was finally accepted - so that process in itself took months to years! In those days we queried agents by snail mail!

I have several projects in the works - ranging from picture books to a middle grade novel in verse to a work in progress for adults to a collection of poetry that's in submission about a nonfiction topic together with Margarita Engle, a poet I deeply admire.

What were the one or two best things you did to further your writing career? Is this the same advice you'd give to aspiring authors?

The best thing I did and continue to try to do - is to practice Karma Yoga, like my protagonist in my verse novel A TIME TO DANCE. Karma yoga means putting your heart and soul into your work and then dissociating from the material success is may or may not receive. I don't always succeed, and it's an ongoing and eternal struggle - especially tough in a year like this, when I have a new novel out, because I want so much for it. Especially with THE BRIDGE HOME, which feels like it's the story of not just the children I knew but also the children of today who struggle like them to just stay alive in dire poverty. It's so hard because I want this story to be known and celebrated, I want readers to recognize and respect and go the extra mile for THE BRIDGE HOME because it's about an issue that is both timely and unfortunately timeless (it's been called "Oliver Twist meets Slumdog Millionaire" and I think that summarizes the fact that hunger and homelessness and all the other challenges the kids face in the book are present in every country and unfortunately have been part of our human existence for so long). So I want so much for this book, I want everything for this book, and it doesn't feel like my book, it feels like a story that is beyond me and that just happened to come through me; and yet, there is only so much I can do, and most of what happens to the book isn't in my hands at all. So I have to withdraw and not worry about what it hasn't got, even as I remain deeply grateful for the blessings the book has received - such as being chosen as a global read aloud.

All this to say, I know how incredibly hard it is, especially in this day and age when we're not allowed to live in the woods and just write as authors, but instead expected to be out there helping to publicize our books, but the best advise I can give is to define yourself as a writer because you love to write. We are writers because we love writing - it doesn't matter if we're published or have awards or not, in the end, we are all equal in that we are here because we love it. So prioritize the process, pour yourself into your projects, and then, once they're done, do your best to stay unattached to the successes or failures of the product.

I used to play the veena which is a 7-stringed South Indian instrument.

I love to connect with people via twitter (@padmatv) and I'm also on fb and ig (venkatraman.padma). The best place to find information about my life and work is my official website: www.padmavenkatraman.com. For those looking to contact me, there's a contact form on the website. On the website's resources page there links to educational material created for the books - and a tab which has a long list of lesson plan suggestions, fun activities, social justice tie-ins and more for THE BRIDGE HOME. There's a lot of information and material for THE BRIDGE HOME especially because it's a global read aloud and a projectLIT selection.

Finally, those looking to invite me for an author visit can contact me via The Author Village at:
https://theauthorvillage.com/presenters/padma-venkatraman/

Padma Venkatraman lived in 5 countries, explored rainforests and coral reefs, and served as chief scientist on oceanographic vessels before becoming an American author. Her latest novel, THE BRIDGE HOME, was released to 5 starred reviews (PW, Kirkus, SLJ, Booklist, SLC) and is a Washington Post Summer Book Club Selection, a ProjectLIT book club selection. a Mighty Girl pick,  and a Global Read Aloud 2019. The San Francisco Chronicle calls it "beautifully rendered" and the New York Times refers to its "gorgeous storytelling." Padma Venkatraman is also the author of CLIMBING THE STAIRS, A TIME TO DANCE, and ISLAND'S END, all of which were released to multiple starred reviews and have garnered awards and critical acclaim.
a Rafflecopter giveaway
Labels: Author Spotlight Padma Ventrakaman