We are excited to feature acclaimed and best-selling graphic novelist and artist Gene Luen Yang and his newest graphic novel, SUPERMAN SMASHES THE KLAN, Issue 1 (October 2019) and 2 (December 2019) (DC Comics), with art by the Japanese team Gurihiru. Enter to win a copy! 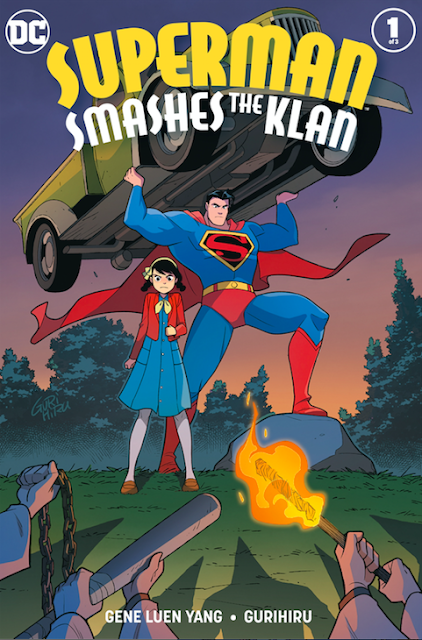 Tell us about your background and how you came to write and illustrate comics, graphic novels, and books.
I started collecting comics in the fifth grade.  My mom bought me a Superman comic book off of a spinner rack at our local bookstore. That set off a lifelong obsession.


Within weeks, I went from reading comics to making comics. My best friend Jeremy and I used to make up stories together. I did the pencils and he did the inks. We gave our original art to his mom, who would take them to work with her, wait until all her coworkers went home, and sneak photocopies for us. Jeremy and I stapled the photocopies into books and sold them for fifty cents a piece. We made eight dollars and it was amazing. That was the beginning of my comic book career.
I’ve always been interested in telling stories through pictures.  Comic books are a perfect way of doing that.
Congratulations on your forthcoming book, SUPERMAN SMASHES THE KLAN. Tell us about it and what inspired you.
I'm very, very excited about this project. SUPERMAN SMASHES THE KLAN is the retelling of one of the most famous storylines in the Superman mythos. Way back in 1946 on The Adventures of Superman radio show, the Man of Steel defended a Chinese-American family against a group of hooded, hate-filled racists. Many historians credit the Superman radio show with the real-life Ku Klux Klan’s public image downfall. After being portrayed as angry, bumbling buffoons on a children's program, nobody in America could take the Klan seriously. 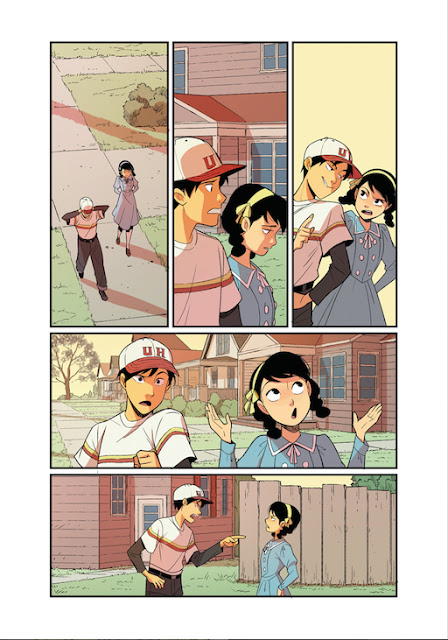 It's one of Superman's most important storylines, but it's never been told in comics. I'm teaming up with a Japanese art team name Gurihiru. Together, we are bringing this classic tale to life as a three-volume graphic novel series. The first volume comes out in October 2019, the second in December 2019, and the third in February 2020. 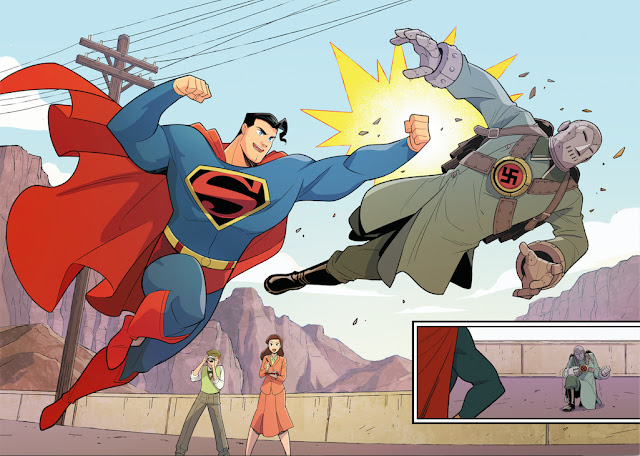 I first learned about the old radio show storyline from a book called Freakonomics. The authors use it to illustrate the importance of storytelling. I, however, was most intrigued by the fact that all of the action was centered around a Chinese American family.  I mean, this was back in 1946! I'm in Chinese American and I've been reading Superman stories since the 80s. I just didn't come across very many character who looked like me. 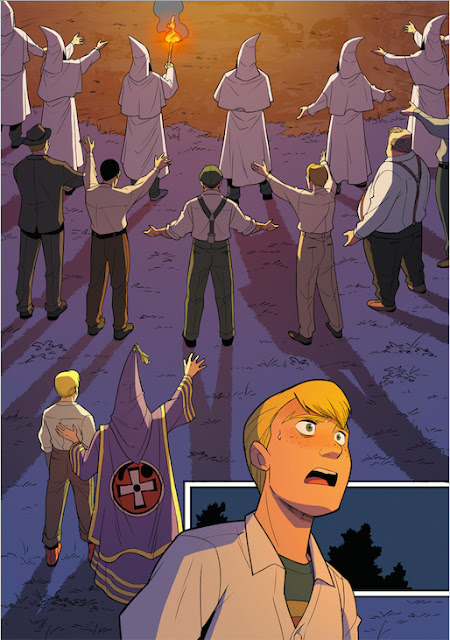 SUPERMAN SMASHES THE KLAN has two protagonists. One of them is Superman and the other one is the daughter of that Chinese-American family, a young lady named Roberta Lee. Superman is an immigrant from the Planet Krypton. Roberta's parents are immigrants from China. They're both outsiders. At its heart, our story is about how two outsiders navigate through a society that is sometimes hostile to people like them.
Your acclaimed work is quite varied, from deeply personal graphic novels to franchised comics to fun, educational graphic novels about coding. How do you decide what your next project will be? What projects are you working on now?
I’ve been lucky. For the most part, I get to follow my interests in my work. I’m interested in Asian American history. I’m interested in coding. I’m interested in superheroes. I've done books about all three. Like I said, I’ve been lucky. 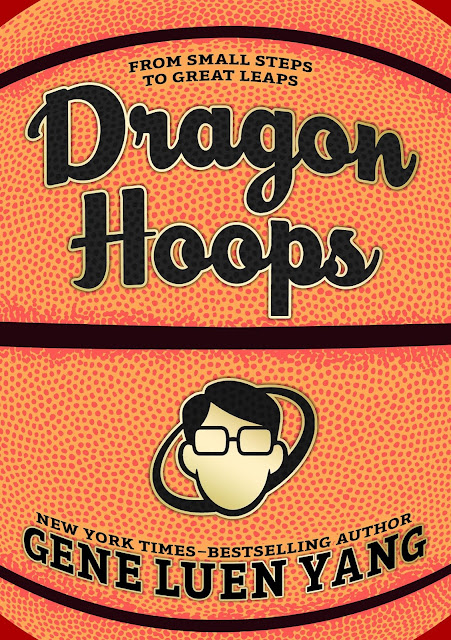 Right now, I'm finishing up my next big graphic novel from First Second Books. It’s called DRAGON HOOPS and it’s my first non-fiction work. During the 2014-2015 season, I followed a high school basketball team in Oakland, California. I did a graphic novel about the team. DRAGON HOOPS is a story about a team of coaches and players all chasing after the same goal: the California State Championship!
What advice would you give to aspiring cartoonists and graphic novelists?
If you want to get good at anything, you have to practice.  Practice, practice, practice. Set aside time every week, or even every day, to practice writing and drawing. 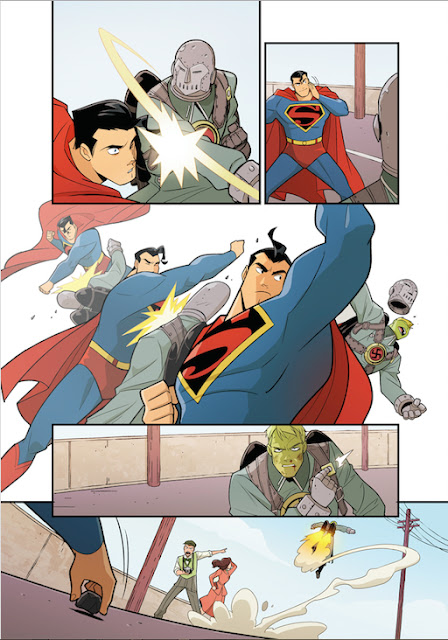 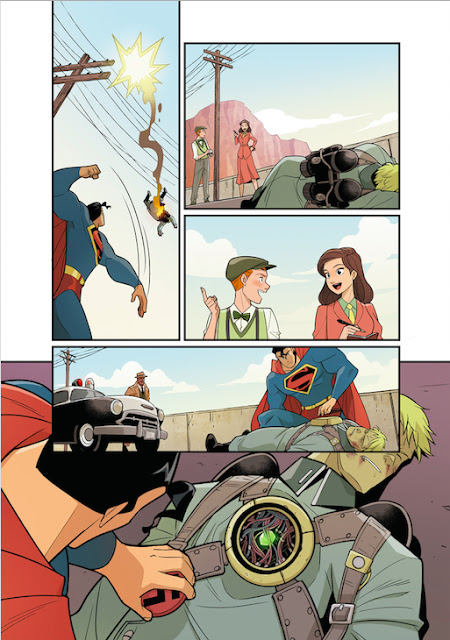 What is one thing most people don't know about you?
I'm not a big fan of camping but I keep having to go because my wife and kids love it.
Where can people find you online?
I have a website at www.geneluenyang.com.  I'm also on Twitter and Instagram @geneluenyang

His 2013 BOXERS & SAINTS, a two-volume graphic novel about the Boxer Rebellion (First Second Books), was nominated for a National Book Award and won the L.A. Times Book Prize. Yang has written a number of other comics, including Dark Horse Comics’ continuation of the popular Nickelodeon cartoon Avatar: The Last Airbender and DC Comics’ Superman.
Gene was named the National Ambassador for Young People's Literature for 2016-2017.
a Rafflecopter giveaway
Labels: Author Spotlight Gene Luen Yang Illustrator Spotlight