We are excited to feature author-illustrator Jessixa Bagley and her recent picture book, HENRY AND BEA (Holiday House, Oct. 2019). Enter to win a copy! 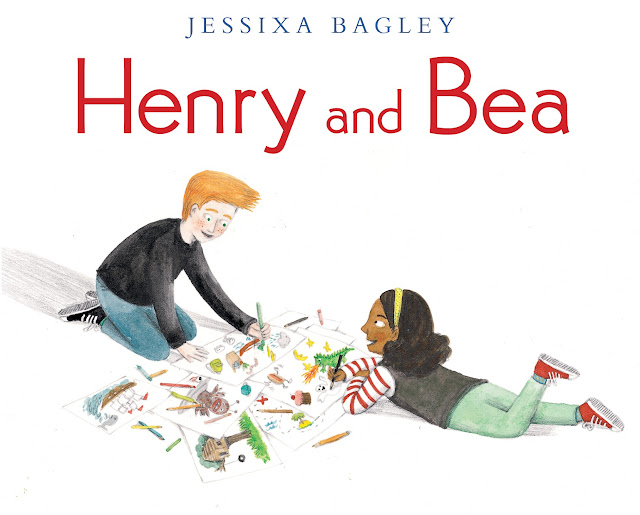 I'm a bit of a compulsive person when it comes to thinking about picture books- I think about them constantly. This probably started when I was a kid and just loving picture books and pouring over the illustrations. It was a love forged back then and was always what I wanted to do- using words and pictures to tell a story and creating really strong characters who's stories I could tell.

Congratulations on your recent picture book, HENRY AND BEA. Tell us about the story and what inspired you?

Thanks so much! HENRY AND BEA comes from a very personal place. It is about friendship and supporting a friend through something rough. Two best friends Henry and Bea do everything together. Then one day Henry becomes withdrawn from Bea and school and no one knows why. Bea struggles but tries in small ways to stay present with Henry.

One day the class takes a field trip to their teacher’s family farm. Once at the farm, Henry goes off on his own and Bea follows after him only to discover that Henry has found an old cat collar. When he shows Bea the collar, he starts to cry. It turns out his own cat has just died, but he didn't tell anyone about it. Bea consoles him gently and helps him say goodbye to his cat by burying the cat collar with Henry. Bea shows her strength as a good friend and is there for him even when it's hard for her.

The story was based on a real event from when I was in the 6th grade. Basically, this exact thing happened to me, with some minor story changes. The main character Henry is part inspired by a friend of mine from school at that time that I used to make art with.

The real subtext of the story though is about my relationship with my husband, Aaron, and his struggle with depression. Navigating the complicated struggle is a real challenge for those experiencing it and for the people around them. Bea is an inspiration to me to remember that being a support doesn't mean fixing someone's problems, it means just being there for them so they aren't alone.

It was definitely a long winding road. I started submitting to publishers a month after I graduated from college in 2004. That's when my rejection pile started. I spent about six or seven years cold submitting and trying to do everything on my own. It was very lonely and hard. I eventually joined SCBWI around year five, but didn't understand how to really use them as a support system until I went to the LA conference in 2011 I got to see first-hand what this business is all about and how I had been doing everything pretty much the opposite of how I should have been doing it!

After that, I worked on my portfolio, joined a crit group, attended SCBWI meetings and conferences. I finally started to find myself more as a writer and artist. Then at the NY SCBWI conference in 2013 I was runner up in the portfolio showcase and met Alexandra Penfold at her breakout session and submitted to her after the conference. Shortly after, she offered me representation and within two months, she sold my first picture book in a two-book deal to Neal Porter. So, all in all, nine years after I submitted my first manuscript, I sold my first book.

The details of my process have been evolving lately, but it's roughly the same: I start with the ideas which come out in rough small thumbnail form- about 2" in size. Based off of those, I make more refined sketches. Lately, I have just been blowing up the thumbnails to the size they would be printed at and tracing their compositions to make my sketches off of. This keeps the proportions of my sketches much tighter. Once I have the sketches, I trace the sketches onto my watercolor paper and then paint. I do all of my pencil detail work done last. If I use pen instead of watercolor, I do the pen work before I paint. I also do a lot of research early on in the process, so I know how to draw the things I'm going to draw-like if I am going to draw badgers, I look at TONS of badgers! It sounds like it would be boring, but it's usually pretty fun!

You've been very successful from your highly-acclaimed debut picture book, BOOKS FOR PAPA, to your varied career in fine art and illustration. What are the one or two best things you did for your career, and is this advice you'd give to other illustrators and author-illustrators?

While it was very emotional to get rejected for so long-of course now see why I was getting them. I pretty much made every rookie mistake possible: Not researching the publishers enough, sending my work to the wrong kinds of publishers, sending submissions outside of the guidelines of specified by each publisher, not having a crit group to bounce my work off of, and the biggest mistake not understanding the kinds of books I was trying to write and illustrate.

So, my first biggest pieces of advice is really understand what you are trying to do-research of both the books you want to make and the industry. Read GOBS of picture books so you understand the form and really look at the publishers and agents to make sure you are sending your work to the right people. The second biggest piece of advice is to join SCBWI. SCBWI really gave me so much knowledge, community, and opportunity that I definitely owe the start of my career to them.

I used to work at a toy company and once I posed for a toy set they made of zombies. So, there is an actual action figure you can buy of me as a zombie. It even has my hairdo.

Jessixa Bagley is an illustrator and comics artist. Her previous books include BOATS FOR PAPA, which received four starred reviews and a Golden Kite Award, BEFORE I LEAVE, LAUNDRY DAY, which received an Ezra Jack Keats Award Honor, and Vincent Comes Home, which she wrote and illustrated with her husband Aaron. Her editorial work has appeared in The Stranger, The Chicago Reader, Nickelodeon Magazine, and The Seattle Weekly, among other publications. She lives in Seattle, Washington.