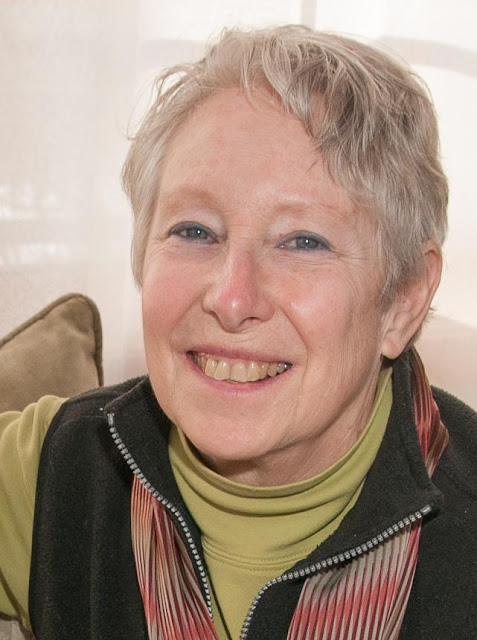 We are excited to feature award-winning picture book author Jennifer Berne and her new book, ON WINGS OF WORDS: THE EXTRAORDINARY LIFE OF EMILY DICKINSON, illustrated by  Becca Stadtlander (Chronicle Books, Feb. 18, 2020). Enter to win a copy! 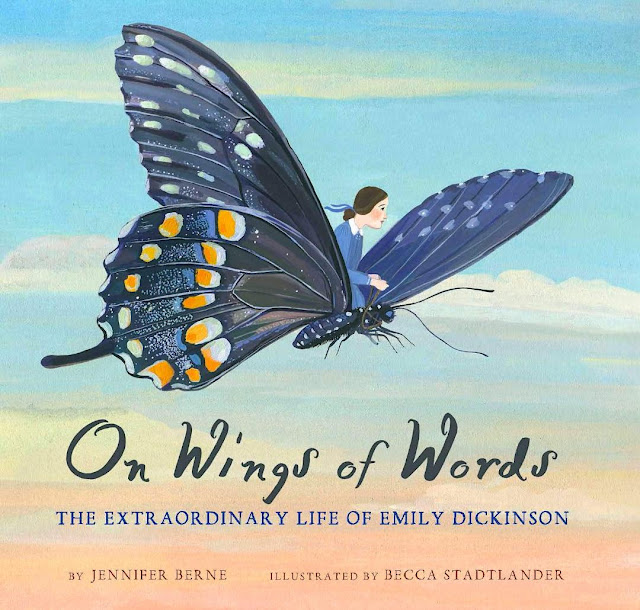 You have a fascinating bio--from working for Andy Warhol to advertising to sailing up and down the Atlantic coast. What led you to write for children?
Well, once I was ready to leave the advertising world and move upstate from NYC, I needed to figure out what to do next. Since I had spent my whole career writing, it seemed logical to keep writing — but what?

After all those years of working on print ads and TV commercials, I couldn’t imagine writing anything with just words and no visuals. I love the interplay and synergy of words and pictures. So picture books seemed perfect. They are so beautiful, and there is something magical about the way the words and illustrations come together to tell a story. To me picture books are a unique and powerful art form.

As far as subject matter, I knew instantly what I wanted to write about -- the things that interest me the most. Our world, nature, science, our amazing universe, and the people who discover its secrets and who are passionate about it.

After so many years of writing about products — everything from food to toys to brokerage companies — I could finally write about the subjects I loved. And what better readers could there be than 4 to 8 year-olds! They are so open, so curious, so enthusiastic, such wonderful little sponges for information. I can’t imagine writing for a better audience!
Congrats on your upcoming book, ON WINGS OF WORDS: THE EXTRAORDINARY LIFE OF EMILY DICKINSON. Tell us about it and what inspired you.
As you can see from my other books, writing about a poet is somewhat of a departure for me. My other biographies are about people who are fascinated by the secrets of the universe and who explore and delve into those secrets. And yet, in a way, that’s what Emily Dickinson did too — in a much more internal, intellectual and literary way. To me Emily is an explorer too — an explorer of the inner world, of emotions and of the essence of what life is about. Yes, she wrote often about the natural world she loved so much, but her most passionate and fascinating writing was about what it means to be human, to feel, to want, to live, and ultimately her search for what eternity is.


Even though Emily lived over 100 years ago, I think she is a person who is more relevant today, more contemporary in her thinking, than she was in her own time. Her cult-figure status, and all the new books, movies and TV series about her proves how compelling and fascinating she is to each new generation.

As for what inspired me, it was Emily’s writing itself — her poetry and her letters. I am continually astounded by her deep thinking, her stunning individuality, her unique brilliant style, and the fascinating poems she created.

In my book — ON WINGS OF WORDS — I tell the true story of Emily, a little girl who was different from the rest, who didn’t want to be told who to be or how to think. A child with big questions, who sought the truth behind things. An explorer who wrote what she saw and felt — and through her writing, found her truth, her power, her wings.

The format of the book could be described as a duet of two voices — with Emily’s words being woven into the story, playing off of my words. So really the story of her life is being told by both of us.

The illustrations are by Becca Stadtlander, and she did a superb job. This book was 5 years in the making, and I am so excited to see what will happen when it finally ventures out into the world!
Was your road to publication long and winding, short and sweet, or something in between?

It was a bit winding. The hardest part was of course before I had an agent. I was writing in pretty much of a vacuum, and just starting to learn the business. I did my library and bookstore research. I joined SCBWI. I went to many online sites. But still, what to do with the manuscripts I had written?

I sent them to as many publishers as I could find who accepted unsolicited manuscripts. I collected my share of rejection letters. Then a friend of a friend gave me some great advice. She said, try to get published in some children’s magazines. So that’s exactly what I did. I made a great connection at Nick Jr Magazine, and ended up writing many pieces for them. The first one even won an award! That seemed to jumpstart my career. And from there I was able to get an agent. Then things began to move along, and finally my first book was published. I was an author!
What projects are you working on now?
My next book is DINOSAUR DOOMSDAY: ONE WORLD ENDS AND ANOTHER BEGINS. It’s the story of the dramatic catastrophic extinction of the dinosaurs 66 million years ago, and how that paved the way for the rise of the mammals and for us. It’s going to be illustrated by Brian Floca. So obviously, I’m super excited about that! It’s also a Chronicle book. The publication is planned for Spring of 2021.

Aside from that, I’ve sold a couple more manuscripts — one about the sea and the evolution of all the creatures in it — and another about the moon. Now I’m starting to work on a few new ideas. I never know where this road will lead me. Each new twist and turn is a surprise.
Writing picture book biographies is a specialized and tough-to-master skill. What advice would you give to aspiring picture book authors about writing biographies?
To me, one of the most important things is to write about people who fascinate you, people you love. That’s because a huge part of writing a biography is doing the research. For my Einstein book I read (or delved into) over 50 books about him. I spend months digging into the lives of the people I write about. It needs to become almost an obsession.

Next, you need to find the “story" of their life — the basic thread that carries you from their youth to their developing curiosities to their passions, their obstacles, their quest, and to what they became and their place in the world. There are many different ways to do this for any one person. But you need to find the thread that will carry your story, the way you want to tell it.

When I write my first drafts, they get bigger and bigger, and longer and longer. They become huge. Then I have to start sculpting —  carving them down to their core and their essence — to what the story is, and discard anything it isn’t.

The other crucially important element is the writing itself. What style and tone do you want to use? Do you want it to be lyrical, punchy, mysterious, poetic, in the voice of the person themselves, with a hint of appropriate dialect, etc? Obviously the writing is a huge element, as big as the story.

And, for any author, for any manuscript, there is nothing more important than editing. I edit and edit, hone and hone, tweak and tweak. Over and over and over. The manuscript changes and evolves for weeks and months. I sculpt and re-sculpt it, until finally, on one surprising day, I can’t seem to find one more thought, one more sentence, one more word I want to change. Then it’s off to my agent, and ready to find its home with a publisher.
What is one thing most people don't know about you?

I love architecture and houses. I designed the house my husband and I live in. I can spend hours getting lost in floor plans. When I look at a floor plan I feel as though I’m actually walking around in the space itself. One of my greatest thrills is when friends ask me to help with their house or apartment design.
Where can people find you online?
At www.jenniferberne.com

Jennifer Berne is the award-winning author of picture book biographies: MANFISH: A Story of Jacques Cousteau; ON ABEAM OF LIGHT: A Story of Albert Einstein; and LOOK UP WITH ME: Neil deGrasse Tyson: A Life Among the Stars. Her fiction books include CALVIN CAN’T FLY: The Story of a Bookworm Birdie. Her books have earned stars from Kirkus, Publisher’s Weekly, Booklist, SLJ, and Horn Book, as well as being chosen as New York Times Editors Choice, NPR’s Great Reads, Eric Carle Museum’s "Best of the Best,” and have been translated into 15 foreign languages.

Jennifer grew up in New York City where she was active in dance and theater as a child. She studied art and design, and worked for Andy Warhol at "The Factory." After a successful career in advertising, Jennifer began writing for Nick Jr. Magazine and writing books about the subjects she loves most—our amazing universe and the people who discover its secrets. She lives in a house she designed in the rolling hills of Columbia County, NY. She and her husband spend their summers aboard their sailboat, cruising the coast of Maine.