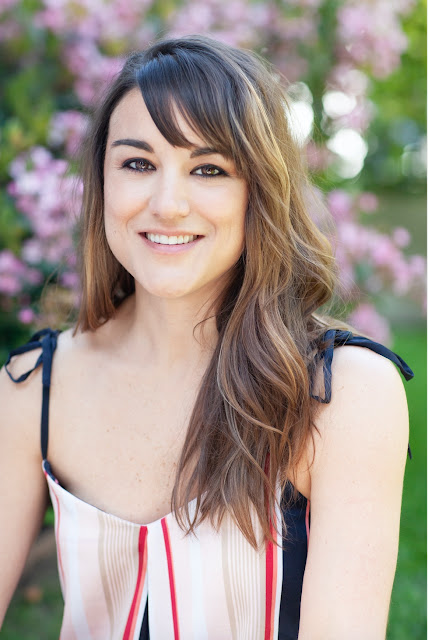 Today we are excited to feature author Liz Lawson and her debut YA novel THE LUCKY ONES (Delacorte Press, April 7, 2020). Enter to win a copy!

Hi! I’m Liz, and THE LUCKY ONES is my debut novel. It comes out 4/7/2020 from Delacorte Press. I started writing for teens a few years ago when I was in a place in my life where I remembered how it feels to be a teenager. The pain and the hope and the confusion and the idea that you’re simultaneously invincible and incredibly vulnerable. It’s amazing to me how high school is only four years but feels now like it was a lifetime. So much happens, so much growing and learning and changing. It’s an incredible time of life to explore.

Congrats on your book, THE LUCKY ONES. Tell us about it and what inspired you.

Thank you so much! It’s the story of May and Zach, two LA teenagers who have both been affected in different ways by a school shooting that occurred a year prior. It’s a book about finding hope through tragedy. It’s dark and about a serious subject, but it’s really about finding light on the other side of that darkness.

I grew up and graduated from high school right when Columbine happened, and that changed the entire landscape of our country, forever. I started writing this book for all the kids who are faced with this reality, day in and out. I wrote it for the kids who have lived through the shootings that are mentioned above and the many other shootings that aren’t, and for those who fear that they might endure a similar fate someday. For those who have made their way through painful, heartbreaking times and managed to find their way through to the other side. I wanted to show them that there is hope.

I’d say somewhere in between. I wrote one book which I immediately shelved and hasn’t seen the light of day since—very much my practice book. Then, I wrote one that I decided to take more seriously and queried it to no avail. I came close a few times, but it ended up on the shelf too.

And then, while I was querying that book, I started writing THE LUCKY ONES. In retrospect, I can see that I absolutely needed to get through those first two books to grow as a writer and write something that was actually publishable. You really do learn so much with each new book. I queried, accepted an exclusive R&R with Writers House, and spent the next three months working on it as much as I could. And then I signed with my agent there!

Because my R&R was so extensive, there wasn’t much more to do before going on sub, and once we went on sub, my book sold in a week (I was very fortunate). So it was very, very slow for a long time, and then very, very fast at the end!

I just turned in my first draft of my second book to my editor! It’s due out 2021 (although what with everything going on right now, I assume there’s a chance that it might be delayed) and is entitled IN SILENT SEAS WE DROWN. It’s YA Contemporary again!

What are some of your recent top YA picks?

Oooo well I have been lucky enough to read a whole slew of Roaring 20 debuts out / coming out in the next few months, so there are SO MANY that I love!! Phil Stamper’s THE GRAVITY OF US, Kim Johnson’s THIS IS MY AMERICA, Kyrie McCauley’s IF THESE WINGS COULD FLY, Cameron Lund’s THE BEST LAID PLANS, Eva V. Gibson’s TOGETHER WE CAUGHT FIRE, Suzanne Park’s THE PERFECT ESCAPE…. I could keep going into fall books, but I’ll refrain haha. The ones mentioned are all out/coming out soon!

KEEP GOING. I know people say it all the time, but it’s true—if you don’t keep going, you could miss out writing that next book that could the ONE. It’s hard, but perseverance is important at any point in this career – there’s always rejection, no matter where you are. Always someone who doesn’t like what you’re doing. Keep your head down and believe in yourself.

Not sure how many people in the book community know this, but in my day-job life I’m a music supervisor of film and TV! One of the films I supervised in 2018 (SUPPORT THE GIRLS) actually ended up on Obama’s list of his favorite film of the year, which was really cool!!

Liz Lawson has been writing for most of her life in one way or another. She has her Masters in Communications with a Concentration in Rhetoric from Villanova University, and has written for a variety of publications including PASTE MAGAZINE. When she's not writing, she works as a music supervisor for film & television.


Liz resides in Los Angeles, CA, where she lives with an adorable toddler, a fantastic husband, and two VERY bratty cats. You can find her on Instagram and Twitter at @lzlwsn.