Today we are pleased to feature middle grade authors Francesco Sedita and Prescott Seraydarian and their debut graphic novel, THE MYSTERY OF THE MOON TOWER (THE PATHFINDERS SOCIETY), illustrated by Steve Hammier (Viking Books for Young Readers), coming out on April 21, 2020. Enter to win a copy (to be mailed in the future)! 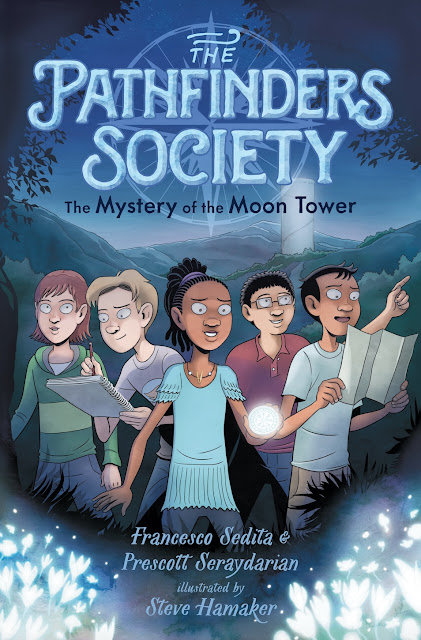 Tell us about yourself and how you came to write graphic novels.

Hi! Thanks so much for having us! It’s a long winding path that led us here for sure but we’re so glad to be where we are and beyond excited for the release of the first Pathfinder’s book. Well long-story short, we met in college, at New York University.  Francesco went for writing and Prescott for film. From the beginning we would make a lot of projects together, from TV ideas, to short movies, shows, musicals, you name it!

After graduating and our lives went on, we kept talking about doing something together again. So THE PATHFINDERS SOCIETY has truly been an epic conversation between us--for almost 12 years!  It’s evolved a lot over that time, but the inspiration of telling an exciting and meaningful adventure story that we would have loved reading on a rainy summer afternoon in middle school hasn’t wavered. So back to your question.

We actually developed Pathfinders originally as a pilot for television, but the scope of the story felt bigger and the characters more intimate then those on TV, so when we started thinking about graphic novels things started to click as if the story found it’s true path… and here we are!

Congrats on your forthcoming graphic novel, THE MYSTERY OF MOON TOWER (THE PATHFINDERS SOCIETY). Tell us about it and what inspired you.

Because we’ve known one another for so long, we really have so many shared inspirations and a real short hand in how we talk about them.  So, for Pathfinders, we thought long and hard about what we wanted to bring into the mix.  Besides classics like Hardy Boys or Nancy Drew, we thought about the TV and movies from our childhoods that we still love today—like Goonies, The Breakfast Club, Raiders of the Lost Ark and even Scooby Doo. 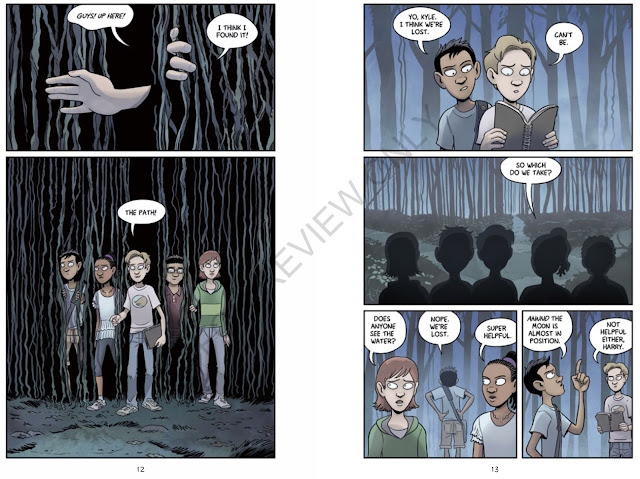 But the touchstone for The Pathfinders Society is actually inspired by real—maybe lesser-known—history. There really is a concrete castle near where Scott grew up that has weird rooms and magical, mysterious tiles that lend themselves to endless creative possibilities. But beyond that, we are ultimately inspired by the theme of different young people traveling a shared path that allows each of them to learn about themselves.

We are both hard at work on Book 3 of the series and are beyond excited about where the path leads. While crafting Book 3 we are also finalizing the incredible panels for Book 2 from our amazing collaborator, Steve Hamaker.  Other than Pathfinders, Francesco is developing a musical and working on a YA novel.  And Prescott had been developing a story about the Oracle at Delphi until the current lock-down happened. Now he’s spending most of his time reimaging his High School Film class to be taught remotely to his boarding students all over the world!

That’s a good one. What do we wish we knew then that we know now? Well the main thing would be to strap in and hold on. It sounds cliché but working on a graphic novel is truly a marathon with new obstacles around every turn. Because of the process of marrying the story, manuscript and art together it can be a very long and detailed process. Much longer and laborious then anything we’ve ever done before actually…. by a mile.

So it’s essential to find an idea that you’re passionate about but also with room to grow or you will get bored, but beyond anything, look for helpful outside support. Working with the team at Viking has been so special, and this series is so much better for it.

Finally expect the unexpected. With all the twists and turns of this process we would never have imagined we would be releasing this book at this particular moment in time. With all the challenges that people are facing we hope that this story can provide a little of that escape and inspiration that we were hoping for on those rainy summer days when you’re stuck inside but your imagination is free.

For FS, it’s that I was a writing intern at Saturday Night Live.  It was a lot of fun and I made coffee for some pretty awesome people!  (And really, I did get to sit at the writer’s table and contribute!).

For PS, it’s his love of old movie programs. Before the internet, these glossy programs (sold at the concession stands with the popcorn) were some of the only ways to get extra info and behind-the-scenes pictures about your favorite films. I have a collection at home that I keep in plastic sleeves… next to my old comics!

Francesco Sedita likes to make lots of things:This book is one of them. Other things he has created are the Miss Popularity books series, the Emmy-winning Who Was? Show on Netflix (which he made with his co-author Prescott!), as well as lots of other books in his job at Penguin Young Readers: like Mad Libs, WhoHQ bestsellers, and other books with amazing authors like Henry Winkler, Lin Oliver, Giada De Laurentiis, and even Dolly Parton.When he isn't making stuff, Francesco is cooking in his apartment in New York City, or binge-watching a series with his husband, or playing with their cute cat, Alfredo. Visit him at francescosedita.comPrescott Seraydarian is a children's video producer and educator. He is the owner-director of Lunch Productions, an award-winning production company whose partners include Penguin Random House, Scholastic, and NBC Universal. He also teaches film and lives at the George School, a Quaker boarding school in Newtown, PA.