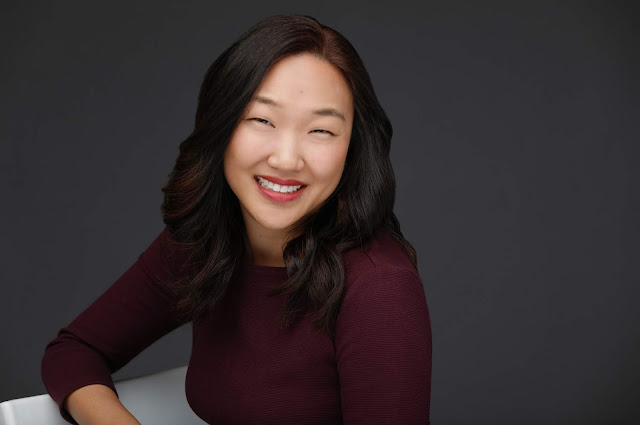 Please tell us about yourself and how you came to write for children.

I'm Jessica Kim and before I started writing, I was a public school teacher teaching 3rd-5th grade students. I've also got two kids, ages 7 and 10. I started writing for children, in part because I was frustrated that there weren't enough books by and about people who look like me.

Congrats on your debut MG novel, STAND UP, YUMI CHANG! Tell us about it and what inspired you.

Thank you so much! My book is about a shy eleven-year-old girl named Yumi who dreams of being a stand-up comedian despite the objections of her immigrant parents who'd prefer she focus on her studies. Somehow, Yumi accidentally steals someone's identity, lies to her parents, and the whole thing tumbles into a big mess. It's a fast-paced book full of lots of laughs and even a few tears.

I was inspired to write about a second generation American kid, who has to toggle between two cultures that sometimes collide. As a child of an immigrant myself, I remember how confusing and challenging it was being stuck between my parents' traditional expectations and values and just wanting to be a normal American kid. This book explores a lot of those themes of identity and self-acceptance.

But it's not just a book for second-generation kids. It's a fun adventure that touches on a lot of themes that any reader can relate to. Yumi struggles with fitting in at school, feeling comfortable in her own skin, and has a hard time with the fear of failure.

The first manuscript I queried was a young adult contemporary was about an Asian American teenager who wanted to go to culinary school instead of college. This story also featured secrets and lies that spiraled out of control. When I sent it out to agents, I got some feedback that the story was reading a little young for YA so I reimagined it for middle grade. Since culinary endeavors in a professional kitchen were not feasible for an eleven year old, I had to switch course and think of another interest my main character could pursue that would be at odds with her family's expectations, which landed me in wonderful world of comedy! After a bit of research, I learned about comedy summer camps and familiarized myself with the tenets of improv and pretty much got sucked into Yumi's world. You could say that the book wrote itself after that.

I'm working on a middle grade book about friendship.

I'm a huge fan of the Millicent Min series by Lisa Yee and really loved all of Dusti Bowling's books, especially The Insignificant Events in the Life of a Cactus

What are the one or two best things you did for your career? What advice would you give to aspiring authors?

I think the best thing I did was take my pursuit of publication seriously. As seriously as one would take getting into law school or medical school. At first, I felt guilty spending so much time away from my family going to critique meetings and workshops on the weekends, but then I realized that, if I really wanted this to happen, I needed to give it my all. So I got connected with writers in my local community and took writing classes, applied for mentorship programs and attended conferences. The whole nine. If I look back at all the writers I've met along the way, I see how much dedication and resilience is required in this industry and the ones that make it aren't necessarily the most talented, but the most committed to improvement.

Advice? I think it's important to remind ourselves that we're all on our own journeys. Probably the toughest part of it is seeing others succeed or hit benchmarks before you. I know everyone says this, but it's true: Keep your eyes on your own paper and focus on telling the story of your heart. It'll happen when it's supposed to happen.

I am an open book!

Jessica Kim writes about Asian American girls finding their way in the world. Before she was an author, Jessica studied education at UC Berkeley and spent ten years teaching third, fourth, and fifth grades in public schools. Like Yumi, Jessica lives with her family in Southern California and can’t get enough Hot Cheetos, stand-up comedy, BTS, and Korean barbecue.