We are excited to feature author-illustrator Ben Clanton and his recent picture book, ROT, THE BRAVEST IN THE WORLD! (Atheneum Books for Young Readers, June 16, 2020). Enter to win a copy (to be delivered later in the summer)! 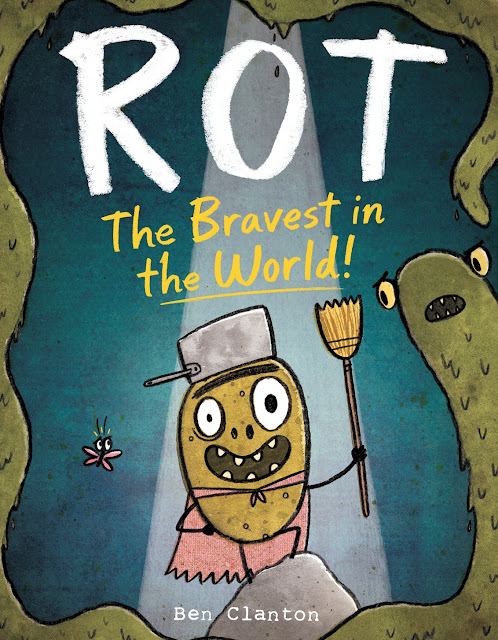 As a kid I struggled with learning to read, so I think it would have surprised 8-year-old Ben to hear that he would one day be writing books. But I've always enjoyed drawing and especially cartooning. It didn't occur to me, however, that I could one day make a career of that until I started volunteering at an elementary school library while attending Willamette University (Anthropology major, politics minor) in Salem, OR. I found myself enjoying the books I was reading with students just as much if not more than they did. I began to wonder . . . could I make a book? So I decided to try. And try and try and try.

Strangely (given that drawing had been a life-long interest) my first attempts were solely writing attempts. They didn't go so well. But Kelsey, my then girlfriend now wife, encouraged me to start carrying a sketchbook around. I soon discovered just how magical it can be to combine words and pictures.

Congrats on your recent book, ROT, THE BRAVEST IN THE WORLD! Tell us about the book and what inspired you?

Thank you! ROT, THE BRAVEST IN THE WORLD! is a follow-up to my book ROT, THE CUTEST IN THE WORLD! In BRAVEST, we meet Rot's big brother Snot. I'm afraid Snot is a bit of a Snot. He is at least not terribly nice to poor Rot. The relationship between the two is in part inspired by my relationship with my older sister, Samantha (aka Mean Green Samantha Jean). We didn't get along a lot of the time as kids. Though we get on well now!

Unsurprisingly, given the title of the book, bravery is a big theme in the story as is the power of imagination and being true to yourself. In the book, there is this creature that Snot creates called "The Squirm" which absolutely terrifies Rot. To face that fear, Rot does something I did a lot as a kid in order to face my fears: he dresses up! In one of the houses I grew up in as a kid there was a playroom in the basement, but I had to go through the dark unfinished part of the basement to get to it. That space between the basement stairs and the playroom terrified me. So I would often don a cape and put on a helmet and carry a broom to help bring out the superhero inside me. With all that gear on I would make a daring run across the formidable unfinished section of the basement to the bright and safe playroom. Rot takes a similar approach when facing "The Squirm" but goes even a step further than I did.

You are most well known for your NARWHAL AND JELLY books. How does your work flow differ between picture books and graphic novels (in terms of how much time they take; how you decide to go with one format over the other; etc).

When I first came up with NARWHAL AND JELLY, I had envisioned that series as a picture book series. The pitch that was sent to publishers included a complete mock-up for a 32 page picture book along with storyboards for two more. The response editors had to the pitch was pretty consistent. Everyone thought the characters had something going for them, but somehow the stories weren't quite working in the picture book format.

It was Tara Walker who encouraged me to explore the possibility of combining the stories into a longer book. Two years of exploration eventually led me to the graphic novel format, which fit with the characters and humor much better. Though some of the picture book aspects are still there. The books are 64 pages, so twice as long as a typical picture book. Which means also twice the work!
As to how to decide which format to go with, I've been learning to take my cues from the characters. For example, as I've gotten to know Rot and Rot's world better, I've found myself coming up with stories for Rot that no longer fit within a typical picture book. So I'm looking at creating a set of graphic novels featuring him as well as Snot and their little sister (my favorite of the lot) Tot!

I just finished up illustrating what will be the first two Narwhal and Jelly board books: BUBBLES and BLANKIE. I have a 2-year-old and a 4-year-old, so it has been exciting to work on books that are for their age group. Though I did my best (and I think / hope successfully so) to make these Narwhal and Jelly board books ones that older readers will actually enjoy too.

I'm getting going now on making the sixth Narwhal and Jelly graphic novel! Book 5, HAPPY NARWHALIDAYS, comes out September 8th. I also have a quirky / pun-filled picture book called Curious EnCOUNTers coming out this summer, which is a collaboration with my friend Jessixa Bagley.

So oodles in the works! Including more of ROT too!

What advice would you give to your younger self and is this the same advice you'd give to aspiring author-illustrators?

My advice for my younger self I think would be this . . .
Create something new every day! Something that brings joy. To you and hopefully to others too. It can be something small. Small things add up to something bigger. So long as you make one thing, you've accomplished something. You've added something to this world. You've made it a bit brighter.

For aspiring authors and illustrators of children's books I think I would add a recommendation of joining SCBWI.
What is one thing most people don't know about you?
I long to be able to dunk a basketball on a regulation height basketball hoop. Someday!

Okay, probably not going to happen . . . but I love to daydream.

Where can people find you online?
www.benclanton.com as well as www.narwhalandjelly.com
As for social media, I mainly used Instagram: @benclantoon
Though I'm also on FB: Ben Clanton's Squiggles and Scribbles, Narwhal and Jelly And Twitter: @Clantoons

Ben Clanton is an author and illustrator whose books include It Came in the Mail; Something Extraordinary; Rex Wrecks It!; Mo’s Mustache; The Table Sets Itself; Vote for Me!; Rot, the Cutest in the World; and Rot, the Bravest in the World. He lives with his wife and son in Seattle, Washington. Learn more at BenClanton.com.