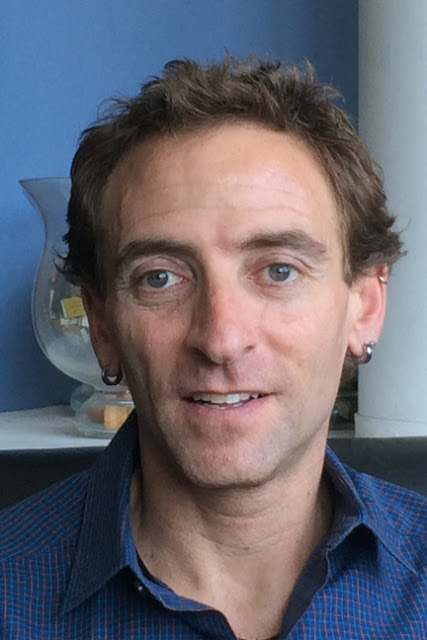 We are pleased to feature author Phil Bildner and his new middle grade novel, HIGH FIVE FOR GLENN BURKE (Farrar, Straus, and Giroux, Feb. 2020). Enter to win a copy!

The abbreviated version of the story goes something like this: I taught middle school in the New York City Public Schools. When I first started teaching, many of the kids had never been in settings where grown-ups actively engaged in reading and writing. So when we did writing in class, I’d be writing, too. Modeling the behavior. Then when we shared what we created, I would share as well. So more than anyone, it was those kids in my class who jump-started my writing.

When I was a kid, it was my fifth grade teacher, Mr. Kramer, who got my creative writing juices flowing. He was the one who kept on saying to read whatever I wanted and to write whatever I wanted.

So I did. Grateful I listened. Appreciate you, Mr. Kramer.

Congrats on your middle grade novel, HIGH FIVE FOR GLENN BURKE. Tell us about the book and what inspired you.

Ain’t gonna lie -- it’s been super exciting to see how folks have responded to A HIGH FIVE FOR GLENN BURKE. You always hope what you create resonates with people, but you never know, and when it does…

So the book is the story of a twelve-year-old boy named Silas. He plays centerfield for his middle school baseball team, loves singing karaoke with his best friend, Zoey, and can recite every line and re-enact every scene from his favorite movie, The Sandlot. When he does a presentation in ELA class on Glenn Burke, the former Major League baseball player, it's not just a report on the inventor of the high five. For Silas, it’s his first baby step toward coming out as gay.

Like Silas, I grew up playing ball -- basketball, baseball, soccer, and tennis. But unlike Silas, I didn't have the internet. I didn't have his access to information, language, words, and ideas. All I knew is that as much as I loved playing ball, kids like me didn't. I didn’t know queer kids played sports. I didn’t know queer kids could play sports. A HIGH FIVE FOR GLENN BURKE is the book I wish I had when I was twelve. It would’ve given middle school me hope.

But the book isn't only for queer kids who play ball. Nor is it simply for LGBTQ kids in general. It's for all kids, for everyone. My hope is the book will help kids grasp the importance of acceptance, to help them open their hearts and minds to the realities and struggles some of their own classmates and teammates may be living.

The origin story for A HIGH FIVE FOR GLENN BURKE is pretty cool. The first seeds were planted way back in 2014 when I watched “High Five,” a short film that was part of the ESPN documentary series “30 for 30.” I remember watching and thinking there’s a picture book in here somewhere. But at the time, I was finishing up A WHOLE NEW BALLGAME and starting on ROOKIE OF THE YEAR, the first books in my Rip & Red series, so I didn’t have the bandwidth for a deep dive.

Flash forward to 2016. I returned to the idea of a picture book biography of Glenn Burke. Did the research, wrote some drafts, wrote some more drafts, and then finally, in January of 2018, my agent submitted it to my editor, Wes Adams.

But Wes didn’t see it as a picture book. He felt the age level was wrong and the heart of the story would’ve been relegated to the afterword. Wes saw it as something else, as middle grade fiction…

That’s what he wrote in his email. And a book was born.

What projects are you working on these days (and can you concentrate)?

Real talk: I’m not doing much writing these days. My mind hasn’t been in a creative space during The Pause. I’ve spoken to quite a few authors about this, and I know I’m not the only one feeling this.

I do know this isn’t a forever headspace. I had been working on a new middle grade, a realistic fiction story set at a basketball camp. But now it reads like a time-stamped, period piece incompatible with our new world. I will dive back in at some point and figure out how to make it work and fit. No doubt. The real writing takes place during the rewriting.

My favorite middle grades from back-in-the-day are the ones I shared as read alouds with my middle school students: FROM THE NOTEBOOKS OF MELANIN SUN by Jackie Woodson, SCORPIONS by Walter Dean Myers, WHEN ZACHARY BEAVER CAME TO TOWN by Kimberly Willis Holt, HEAVEN by Angela Johnson. I still have vivid flashbulb memories of reading those books and the subsequent classroom discussions.

Some of the instant classics I’ve read recently include OTHER WORDS FOR HOME by Jasmine Warga, THE BRIDGE HOME  by Padma Venkatraman, CHIRP by Kate Messner, RICK by Alex Gino, and WHICH LANE? by Torrey Maldonado.

A few of the middle grades on my to-be-read mountain include THE LIST OF THINGS THAT WILL NOT CHANGE by Rebecca Stead, WE DREAM OF SPACE by Erin Entrada Kelly, and DRAGON HOOPS by Gene Luen Yang.

In this age of pandemic learning, I keep hearing how some teachers and parents are telling kids they need to be writing and journaling about this moment, that they’re the real-time recorders of history.

That doesn’t just go for young authors. That goes for everyone.

Let me contort the question and say the thing people tend to forget they know about me. I was an attorney way back when. I went to law school at the New York University School of Law and earned my J.D in 1993. I then passed the bar in two states, New York and New Jersey. I worked as an entry level associate at one of those big, cookie-cutter Manhattan law firms, but after less than a year, I was out. That life wasn’t for me. Three months later, I was teaching 5th grade in class 5-405 at C.S. 6 in the Tremont section of the Bronx.

Phil Bildner is a former New York City public school teacher and lives in Newburgh, New York. The author of many books, among them the Rip & Red series, he speaks at numerous schools and libraries every year.