Today we are pleased to feature author Angela Burke Kunkel and her debut picture book, DIGGING FOR WORDS: JOSÉ ALBERTO GUTIÉRREZ AND THE LIBRARY HE BUILT, illustrated by Paola Escobar (Schwartz & Wade, Sept. 8, 2020). Enter to win a copy! 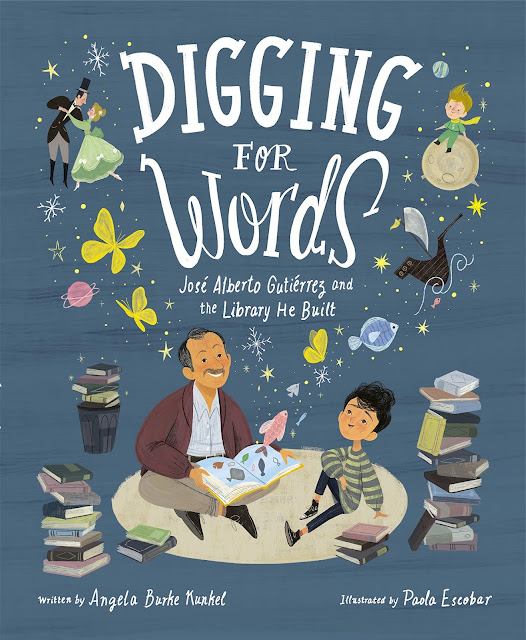 Hi everyone! My name is Angela Burke Kunkel. In addition to writing for children, I’m a former classroom teacher and current school librarian. When I’m not teaching, I generally enjoy hanging out with my family, hiking, and bird watching--- a hobby I recently discovered during the COVID-19 pandemic. Writing for children is something I came to gradually, influenced by both my work in education and, eventually, by having children of my own and rediscovering picture books through their eyes.

Congrats on your debut picture book, DIGGING FOR WORDS: JOSÉ ALBERTO GUTIÉRREZ AND THE LIBRARY HE BUILT. Tell us about it and what inspired you. 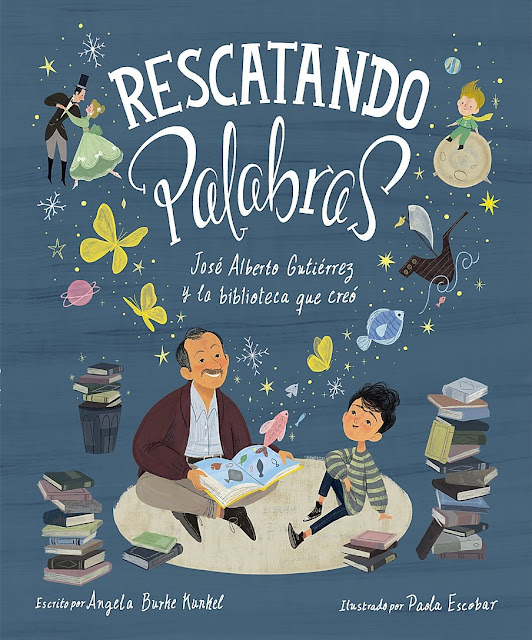 Thank you so much! DIGGING FOR WORDS is based on the inspiring true story of José Alberto Gutiérrez, a Colombian trash collector who established a library for the children of his neighborhood, entirely from books found along his garbage route. I happened along José’s story by chance--- I saw a viral video about his library in February 2017, when I was relatively new to writing picture books. At the time, I was working at a middle school in Albuquerque, New Mexico, and much of my work involved helping students and families get access to books despite socio-economic or linguistic barriers. José addressed similar inequities with his own project. I found his story and his warmth so inspiring that I tried free writing about him one morning, and that casual free write evolved into this book! 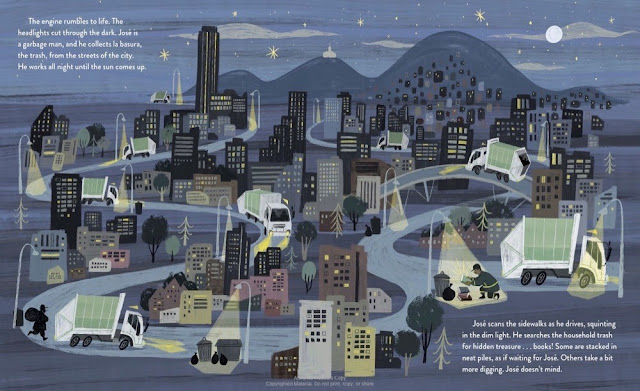 I also want to add that I am thrilled that Schwartz & Wade decided to simultaneously publish DIGGING in Spanish as RESCATANDO PALABRAS. This idea came to me while working at a school with a strong dual-language education program, and I hope it will find a wider audience by being accessible to students in both languages. 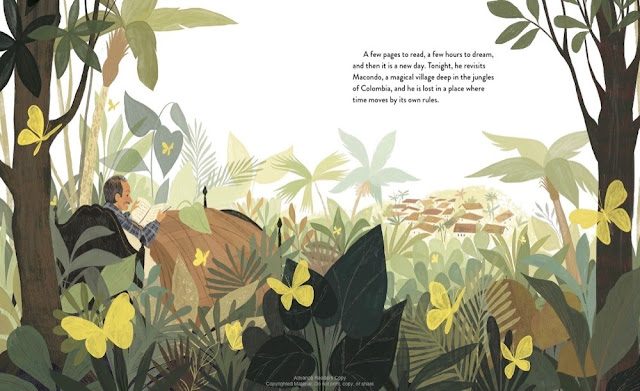 It’s a particular challenge to write about a living person who isn’t a well-known figure. The further I got along in the process, the more I believed in the story, but I hadn’t had any success contacting José. Enter a long-lost high school friend who now happens to now be a professor of Latin American Studies with strong ties to Colombia. I reached out to her, knowing it was a long shot, but I had exhausted every other avenue I could think of. Amazingly, she had him on the phone in twenty-four hours!

A few days later, I sent a Spanish translation of the manuscript, and José generously give the project his blessing with “un abrazo gigante.” From there, I felt more comfortable querying agents. I benefitted from personalized feedback from two different editors along the way, and the manuscript went through several rounds of revision based on their feedback. 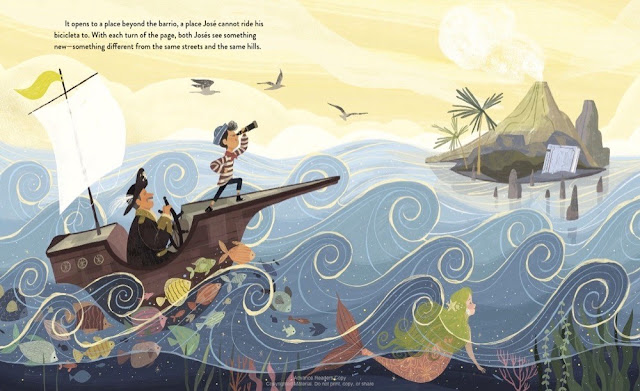 I sent DIGGING to seven agents before signing with Liza Fleissig in February of 2018, and gratefully accepted an offer from Ann Kelley at Schwartz & Wade a few months after that. Annie had Colombian illustrator Paola Escobar in mind from the get-go, and I’m so glad she did--- I couldn’t imagine the book any other way now that Paola has brought the text to life.

I’m lucky that my road to publication has been smooth and enjoyable. I’ve had a lot of enthusiasm and support from others involved in the book, and it’s made it a wonderful process to go through. That said, I wouldn’t call my road “short and sweet,” but I’ll talk more about that below!

I have two nonfiction picture books under contract. I’m super excited about both--- they’re two very different books--- but I can’t talk about either just yet!

What advice would you give to your younger self? Is this the same as you would give to aspiring authors?

So, this is where what seems like a “short and sweet” path to publication is really “long and winding.” I’ve loved to write since I was a child, but my perfectionism really crippled my ability to move from idea to finished product. Because writing initially came easily to me and I was praised by teachers for being a good writer (and, if I’m being honest, really enjoyed that praise), I thought everything I wrote had to be perfect the very first time. I wrote on and off through grade school and college, but ended up setting it aside during my adult years because getting the words down just provoked too much anxiety. It was easier to not write than to allow myself to write something imperfect (or something that would remain half-finished because I couldn’t bring the “perfect” version to life in my attempts).

This changed after I had my kids, because if anything will force you to accept imperfection . . . it’s kids! I took my own children to the library multiple times a week from the time they were babies, and it was through them that I fell back in love with picture books. The marriage of language and art is so special, and I began to think, “maybe this is a scale I can manage.” I could imagine write something a thousand words or less and going back to it multiple times without feeling utterly overwhelmed. That’s not to say that there aren’t points where I get frustrated in the process of writing and revising. It’s just that by my late thirties, I was finding perfectionism and anxiety really boring. I didn’t want them to stop me from doing things anymore.

In that way, I suppose my advice to my younger self and to aspiring authors would be the same: Accept imperfections--- your own, and those in your writing. Invite them in, let them have a seat next to you, and then ignore them and get on with the work (I still need to remind myself of this advice on a regular basis, by the way).

My secondary piece of advice is to find yourself a group of writers who also believe in telling their inner perfectionists to be quiet! It is so easy to fall into the trap of commiserating with fellow writers a little too regularly. Find writing friends who support you and cheer you on, and who you support and cheer on in return. This journey is so much richer because of the friendships that develop along the way.

I am a huge, unabashed Dolly Parton fan. I absolutely adore her. I’ve read her autobiography multiple times, listened to the excellent podcast Dolly Parton’s America, and can probably tell you any number of random pieces of Dolly trivia. Above all, I greatly admire her literacy work and how much she’s done for others. One of my pie-in-the-sky author dreams is to have one of my books selected by Dolly’s Imagination Library.

Angela Burke Kunkel is the author of the forthcoming DIGGING FOR WORDS: JOSÉ ALBERTO GUTIÉRREZ AND THE LIBRARY HE BUILT, illustrated by Paola Escobar and published by Random House/Schwartz and Wade.  After soaking up the sun in the Southwest for a number of years, she now lives in Vermont with her family, two dogs, two guinea pigs, and one rapidly-growing bearded dragon (really, it’s rather alarming). Angela currently works as a school librarian and is a former English Language Arts teacher. DIGGING FOR WORDS is her first picture book--- look for both English and Spanish editions on September 8th.