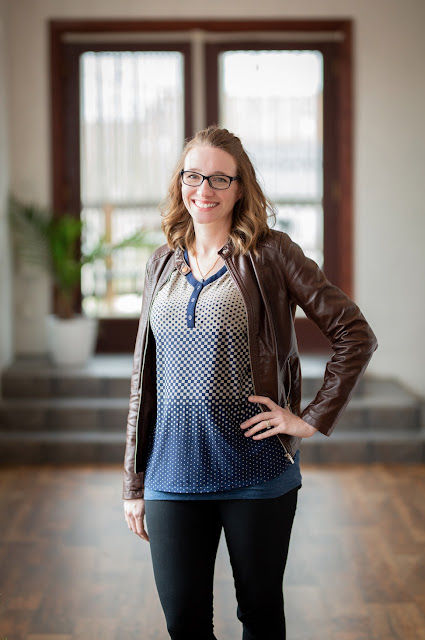 We are excited to feature author Lorelei Savaryn and her debut middle grade novel, THE CIRCUS OF STOLEN DREAMS (Philomel Books), coming out Sept. 1.  Enter to win a copy!

Hi! I’m Lorelei, and I live outside Chicago with my husband and 4 children. I worked for several years as an elementary school teacher and as an instructional coach before becoming an author. I love ice cream, chocolate, reading books in my hammock, taking walks, and hanging out with my family!

My path to writing for children wasn’t exactly linear, but, looking back, it all feels like it fits well into my story. Growing up, I was the kid who was always, always reading. I devoured middle grade stories and many of the stories I read became a part of me, and helped shape me into the person I’ve become. The first manuscript I wrote was actually for an older age bracket, but something about it just didn’t work and didn’t feel right, even after many months of revision. That was when I realized that my favorite work in my life has been when I get to work with kids, and that my favorite books to read were middle grade stories! It was like a lightbulb went on in my head that the most natural fit for me would be to pursue writing stories for children.

Congrats on your debut MG novel, CIRCUS OF STOLEN DREAMS. Tell us about the story & what inspired you.

This story was inspired by so many things! The earliest seed of potential happened on the day my daughter came to me with the idea for a dream that was still there when a child woke up. I found that such a fascinating concept, and I began to think about what it would be like if dreams could bleed over into real life. I was also really into The Greatest Showman at the time, and wondered if I could somehow build on the idea of an immersive dream circus as a setting.

Two of my main characters, Andrea and Francis, are loosely based off of my two oldest children. And the emotional journey Andrea goes on was inspired by the fact that we will all experience things that feel scary from time to time, but that we can choose to be brave and hopeful even when life is hard. Finally, my story also touches on the issue of divorce. My parents divorced when I was twelve, and I wanted very much to write a story that authentically represents a child’s experience of that life-changing situation.

I believe I fall somewhere in the “in between” zone on this. I wanted to see if I could write a novel somewhere around 10 years before I was actually able to summon the bravery needed to do it, and I think it’s important for me to remember and recognize that time. But I began pursuing this dream seriously in January 2017 and signed with an agent in April 2019.

THE CIRCUS OF STOLEN DREAMS was my second completed manuscript. I went through intensive mentoring during Pitch Wars in 2018, which required an entire re-write of the story to get my execution of the concept up to a high enough level to catch the attention of an agent. For this story, I queried for about 6 weeks before receiving multiple offers of representation, and the book sold in less than a week in a pre-empt.All in all, it was a very, very slow start. But things definitely went more quickly towards the end.

What are some recent favorite MG reads?

I am a huge fan of Jonathan Auxier, and I just adored SWEEP. I’m also reading THE BOOKWANDERERS series by Anna James with my oldest daughter, and we’re just about to start the second book. THE WOLF OF CAPE FEN by Juliana Brandt was just lyrical and magical and lovely. NIGHTBOOKS and SMALL SPACES also rank at the top of my most recent creepy stories.

I just turned in my first round of edits on my second book, which is slated to release in fall of 2021! It’s my creepy, magical take on The Secret Garden. In it, my main character loses both her parents on the same night, and her entire world literally turns gray from her grief. It’s all about finding a way to navigate life after a great loss, and I hope it will bring some comfort and healing to the kids who will one day read it.

I’ve been able to concentrate as much as I’ve needed to, and have tried to give myself grace on the days when it’s felt hard. I think part of what has helped is the fact that I believe very much in the power of stories to provide hope to a world that can often feel like a scary place. That’s a really important thing to keep putting out into the world, especially now.

I would tell myself that nothing is wasted. I’m not the youngest person ever to get published, but the years between having this dream and now were filled with so many life experiences that have informed who I am, and which in turn have informed the stories I write in a beautiful way. I gained experience as a human, and as a teacher interacting daily with students, and as a mother now. I’ve learned to be brave and take risks for the things that matter. And all of that, including every single rejection along the way, has helped to bring me to this place. I would definitely also give that advice to aspiring authors too.

I used to do improvisational comedy! I was part of a troupe that would do comedy on the spot by taking suggestions from the audience. It was a really fun chapter of my life and helped me to be pretty good at thinking on my feet in unfamiliar situations.

BUY A COPY OF CIRCUS OF STOLEN DREAMS!

Lorelei Savaryn is an author of creepy, magical stories for children. She holds a BA in creative writing and is a former elementary teacher and instructional coach. When she isn't writing, she spends her time amidst the beautiful chaos of life with her husband and four children outside of Chicago.