We are pleased to feature author-illustrator Kelly Leigh Miller and her recent picture book, I LOVE MY FANGS (Simon & Schuster Books for Young Readers, July 2020). Enter to win a copy! 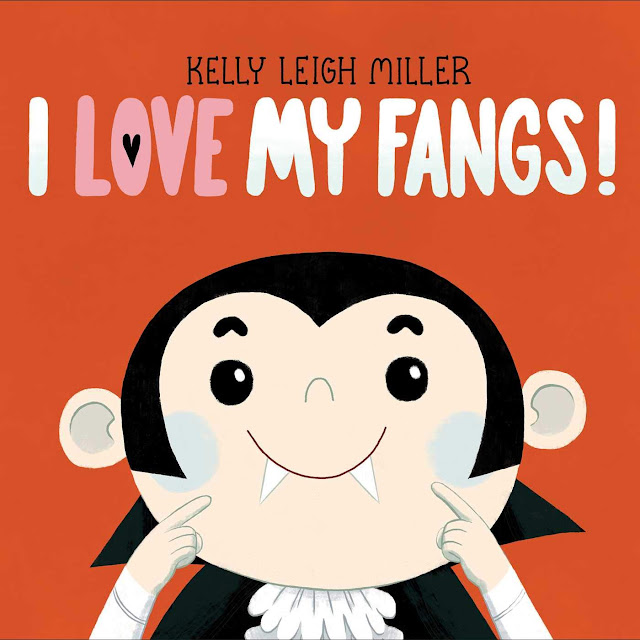 I always made up stories and drew as a kid. I even went to college for illustration. My senior thesis was a picture book, but I never thought of actually submitting it to publishers at the time. It can be intimidating to put yourself out there like that. For years after I graduated, I worked as an editorial illustrator, an artist assistant, then a designer at a toy company. On the side, I was always drawing comics and illustrations. I wanted to illustrate picture books, but never thought of actually writing my own until I was approached by my agent. I worked on about four different stories with her until I came up with I AM A WOLF, my debut picture book which came out in 2019. This is one of the reasons why I tell people not to get discouraged if their first book isn’t picked up.

Congrats on your recent picture book, I LOVE MY FANGS. Tell us about the book and what inspired you.

Thank you! The idea for I LOVE MY FANGS came from a brainstorming exercise. I was participating in Storystorm, where you create a picture book idea a day for a month, and I knew I wanted to make the idea that day about a monster and maybe a children’s “first” sort of thing. I had a few ideas: first haircut, first day of school, and finally first lost tooth.

When I combined monster and tooth, I knew it had to be about fangs and a little vampire. Growing up, I remember kids being excited about losing their baby teeth, but I thought “what if he didn’t want to give it up?” The story sort of developed from there.

I think mine was more in between. Once I AM A WOLF was picked up, everything seemed to move pretty fast but the time it took many years to get to that moment. I mentioned before I had four other stories that didn’t quite make it. With each one, I learned something though, so it felt like it was worth it in the end!

I’m currently working on the sequel to I LOVE MY FANGS and a few other projects that aren’t announced yet. The sequel is called I LOVE MY FUR and it’s about Dracula’s classmate Bigfoot, who loves his fur so much that it begins to consume his life.

What advice would you give to your younger self? Is it the same you'd give to other aspiring author-illustrators?

For my younger self, it would have to be stop being afraid of writing! When I was younger, I was afraid to have others read my writing. The best way to improve and grow is to be open for critiques just like in illustration.

I’m not sure if that particular advice applies to other aspiring author-illustrators but if it doesn’t, then my advice would probably be to take breaks and make sure you don’t burn out. If you’re juggling a job or school on the side, sometimes the best thing to do is break down your author-illustration projects into smaller chunks and tackle those small chunks one at a time. It may feel slower, but recovering from burn out can take way longer. When I started out, I would take on way too much and it would get overwhelming. I’ve learned from my mistakes in the past.

I’ve kept a sketchbook since middle school! Originally they were notebooks that I drew in but once I found out sketchbooks existed, I would buy those instead. I drew so much that it became easier to just have one with me at all times so I had an outlet for it. I’ve kept the habit since then.

Kelly Leigh Miller is an illustrator, author, and cartoonist. She spent her childhood drawing and making up stories in Louisville, Ky, studied art at the Maryland Institute College of Art in Baltimore, MD, and now resides in Chicago, IL where she illustrates and writes professionally. She is the author of I Am A Wolf and many more books to come! Her ideas usually come from daydreaming with her sketchbook and past adventures. When she's not drawing or writing, she enjoys reading a good book, watching spooky movies, exploring museums and going on adventures!a Rafflecopter giveaway
Labels: Author Spotlight Illustrator Spotlight Kelly Leigh Miller