We are pleased to feature author-illustrator Kirk Parrish and his new picture book, MOVE THE CROWD, with song lyrics by the rap duo Eric B and Rakim (Eric Barrier and William Griffin) (Lyric Pop, Oct. 6, 2020). Enter to win a copy! 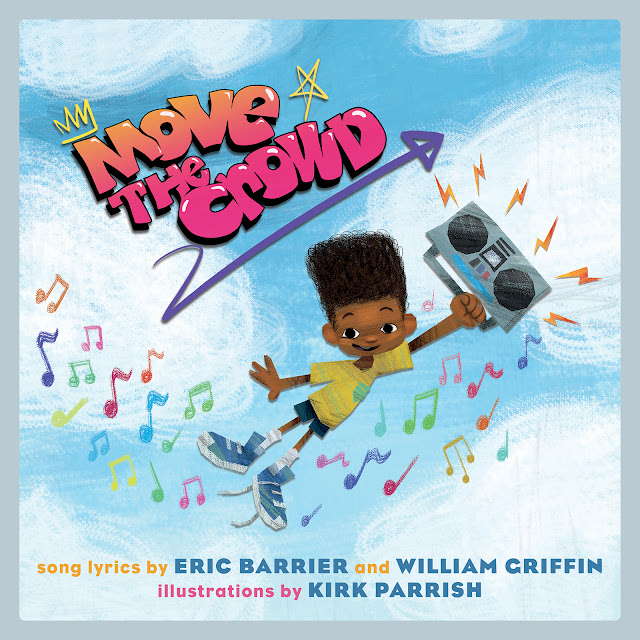 I grew up in the Seattle area and when I was younger, my main goal was to work on animated films for Disney. I'm something of an animation geek and watching those early films from such a young age made me determined to follow that career path. But, I realized if I could just draw for a living, that was the goal... Of course, reading comic books was also a major source of inspiration. I was lucky to grow up with a friend who was just as crazy about drawing. He had a spare room in his house and we turned it into our own little art studio. Those were the best days!

Congratulations on your recent picture book, MOVE THE CROWD. Tell us about this book and how you approached the illustrations.

Oh, thank you! Well, I'm happy to say I've listened to the original song about a million times now and have all the lyrics memorized by heart! But, this was one of the best and definitely most difficult assignments I've ever worked on. I mean, the original song was released in the '80s and it was never intended to become a children's picture book. I must've spent a couple of months alone just hammering down the basic blueprint of the story and finding a direction that also worked hand-in-hand with the lyrics. It was tough to crack, but once I had the storyboard sketches in place, the process of creating the final illustrations was quite fast.

Eek... Where do I even start? I've always had a love for picture books and the pure variety of art styles they come in. So the idea of being a published illustrator had always been there. But it wasn't until around 2006 when I started to pursue that idea. That's when I started a 2-year Children's Illustration and Literature program through the University of Washington. That opened my eyes to the actual craft of making a story and turning that into a book dummy.

Of course, creating a children's book seems easy, but it's always surprising when you start digging deeper and begin to learn the subtleties of what it takes. I soon launched a mass postcard exodus and eventually landed a few gigs with various children's book educational companies. It's been a long and winding road with many peaks and valleys, but I'm so happy to have taken a chance and not gone the traditional route. I carved my own path and if given another shot, I'd do it all over again. I still feel as though I'm just getting started.

Over the last year and a half I've been illustrating an ongoing children's adventure series called EUREKA with my friends at Foundry Publishing. It's been a massive project which updates quarterly and we're still only about halfway finished! The style is completely different from MOVE THE CROWD and it's been incredibly fun fleshing out that world.

I'm also in the early stages of writing and illustrating my first picture book while wearing both hats. Just getting those words down is incredibly daunting and I'm only reminded how difficult the process is. There's also another LyricPop picture book on the horizon!

Follow your gut and try your best to ward off indecision. I can't tell you how many times I've been paralyzed for fear of making the wrong choice. If you can't make up your mind, time will pass, and eventually, life will decide for you. For better or worse... So remember who's in charge here. I'm still learning how to accomplish this and not be weighed down by my own fear of the unknown. Also, don't follow that "trendy" art style. What is it about your artwork which only YOU can bring to the table?

Just at the usual places. My website is www.KirksArt.com and there I provide various links to my Tumblr and Instagram.

KIRK PARRISH grew up on a little island just outside of Seattle. As a youngster, he developed a fondness for scribbling caped superheroes and yearned to one day become a grand-master ninja. Today, Parrish has (mostly) put down his ninja aspirations and is an illustrator and designer, currently based in Seattle. Over the last decade, his artwork has appeared in video games, animation, publishing, and advertising. MOVE THE CROWD is his latest children’s book.