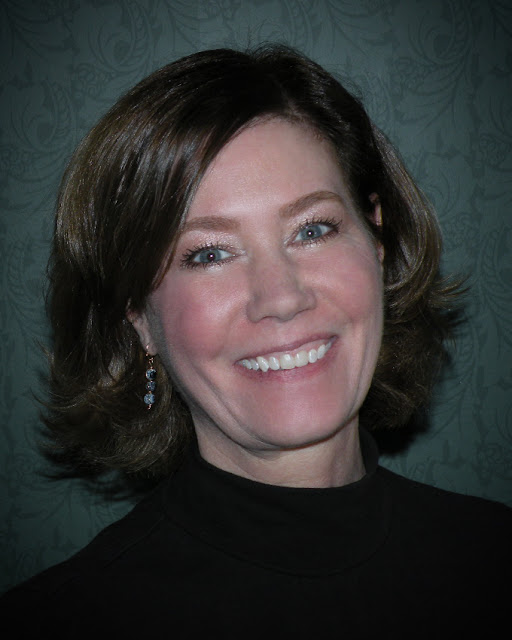 We are excited to feature author KT Johnston and her debut picture book, RAILWAY JACK: THE TRUE STORY OF AN AMAZING BABOON, illustrated by César Samaniego (Capstone 2020). Enter to win a copy! 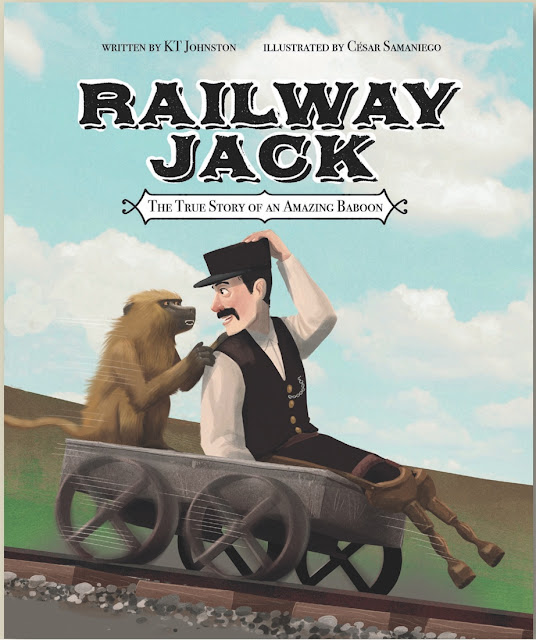 If you had asked someone to describe me as a child, their first words may have been “animal lover.” My room was adorned with animal posters, figurines and stuffed toys. I’m sure it wasn’t a surprise to anyone when I obtained a degree in biology and conducted wildlife behavior studies for the Forest Service and the MN Zoo. I developed materials for the zoo’s education department as well. At one point, though, I chose the corporate world for more stability, got married, and raised two children.

Fast forward in time… When my empty nest left me searching for myself, I began writing. Yes, I’m one of those examples of “you’re never too old to try something new!” One day out of curiosity I dug out my childhood memory box looking for a couple stories I remembered writing, wondering if I’d kept them. I had—as well as over a dozen others. I had forgotten how many I’d written and realized the interest has always been there, waiting for me to notice it.

RAILWAY JACK is my third writing project, but the first to be published. I had coffee with a couple writer friends one morning while I was querying my second manuscript. I had just run across Jack’s story and joked that maybe it would be my next book (since the current one wasn’t getting any looks, lol). One of them suggested it would make a great children’s book. I began to see it in a new light, went home and dove into research that very day, and drafted my first children’s book.

Writing RAILWAY JACK was an epiphany for me because I discovered a clarity for the type of stories I want to write. I want to share little-known tales from the past about animals who profoundly impacted the lives of everyday people, and in a way, touched humanity itself. I hope to spark children’s curiosity about our world through true stories that seed conversations with their adults about human issues.

Congrats on your debut picture book, RAILWAY JACK. Tell us about the book & what inspired you.

Thank you for having me on Kidlit411! It’s fantastic to be here.

RAILWAY JACK: THE TRUE STORY OF AN AMAZING BABOON is the story of the remarkable partnership between a man and a baboon in 1880s South Africa. When railway inspector Jim Wide lost his legs in an accident, he had to find clever ways to get around and perform his work. He obtained a very unusual helper: a baboon named Jack. But not everyone was happy to see a baboon at the rail yard signal hut, and Jim was fired. He pleaded with the authorities to give Jack a chance and they agreed to a test. Jim and Jack’s futures lay in the hands—er, opposable thumbs—of a baboon! RAILWAY JACK celebrates the history of service animals and a devoted friendship. 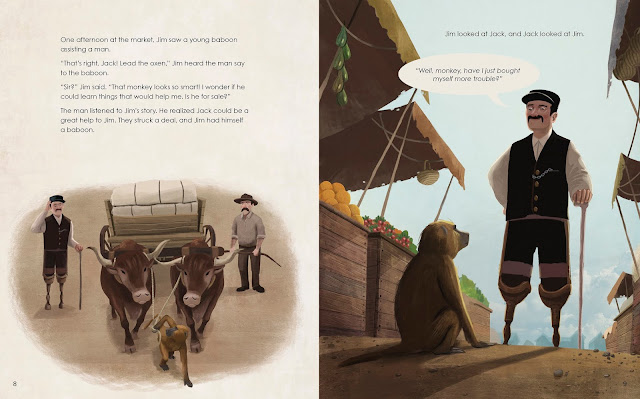 An animal doesn’t aspire to do heroic things; insofar as their world involves humans, they have no real control over their own destiny. Jack was an ordinary animal who lived the only life available to him, yet his devotion to Jim and willing contributions allowed Jim to thrive in a time before there were services and equipment to assist people with disabilities. It is this intersection of innocence, fate and the human condition that inspires my writing.

As Einstein pointed out, time is relative. In the writing world, we really need to think in years instead of months. Given that, I would say my road was something in between. RAILWAY JACK is the 3rd project I queried and I had been writing for five years at that time. It’s the first one I wrote for children, so while I wouldn’t call the road winding, it did have a curve to it.

My next picture book is coming out on New Year’s Day 2022 (also with Capstone). While RAILWAY JACK is about an early service animal, Book 2 is the true story about an early therapy animal. I’ve researched and begun drafts on two more: a 20th century companion animal and a wildlife ambassador. I’ve done preliminary research on three other special animals, and have a bazillion more on my list to look into!

My advice to my younger self would have been more general, not specifically about writing (since I wasn’t writing then). “At the crossroads, don’t let uncertainty pressure you onto the easy path.”

To aspiring authors I say, “Tune out all the thou-shalts and thou-shalt-nots and write what’s knocking to come out. Focusing too much on what people say you ‘should’ be doing can get in the way of finding your own voice and style.”

While I was tracking elk in the mountains of Montana, my pilot did a loop-de-loop in our little 2-seater Piper Super Cub. I’m really glad to have had the experience…but I don’t think I’d want to do it again!

KT Johnston writes historical narrative nonfiction. Her interest in stories from the past developed from a sweeping curiosity about the way things were and how history has impacted the way things are. KT earned a degree in biology and conducted wildlife studies before settling into a corporate career as an analyst. She and her husband are the parents of two grown children. KT hopes to inspire others to be curious about our world as well, one true story at a time.