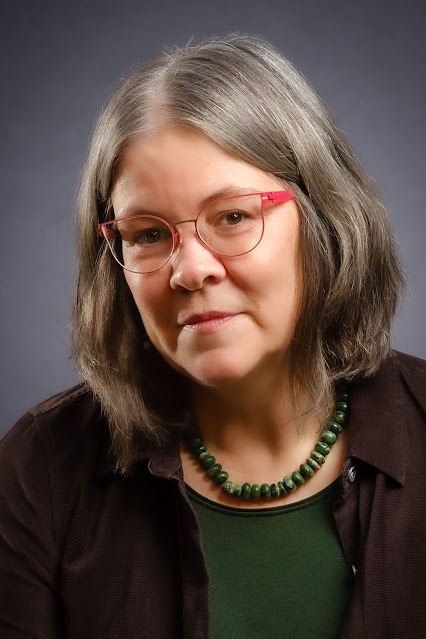 We are thrilled to feature author Cathy Carr and her debut middle grade novel, 365 DAYS TO ALASKA (Amulet Books/Abrams) coming out on Jan. 19! Enter to win a copy!

I’m one of those people who fell in love with reading as a kid and never stopped reading children’s literature. When I worked in a large academic library, I checked out a lot of my old favorites from the literature section. (The university offered an MLS degree and there was actually a decent selection of kid lit several floors up in the stacks. I was always up there browsing.) I reread them all and gradually I started getting interested in the newer kid-lit selections as well as the older ones. I found that I really enjoyed a lot of it.

Gradually somehow I decided to try writing for children myself. I wish I remembered how I came to that conclusion. I don’t understand why my journals from those years have lengthy descriptions of how many cardinals I saw on the bird feeder or what I brought at the grocery store, and nothing about this important life decision. But sadly it’s the truth.

Although I haven’t sworn off writing for adults, my books for kids are keeping me busy and I love doing the best work I can for that audience.

Congrats on your debut MG novel, 365 Days to Alaska. Tell us about it and what inspired you.

The book is about an 11-year-old Alaskan girl named Rigel Harman, who’s grown up in the remote roadless part of interior Alaska that Alaskans call “the Bush.” She loves it there, but when her parents’ marriage splits up her mom moves her (and her two sisters) to Connecticut, where the mom grew up. They move in with Rigel’s grandmother, a lady Rigel hasn’t even met. Rigel has a fierce resistance to this entire state of affairs. To make it bearable, she’s cooked up a plan with her dad that’s going to allow her to move back to Alaska after a year in Connecticut. This plan is what is keeping her going—but anyone who reads fiction regularly has probably already guessed that Rigel’s beautifully simple plan doesn’t end up going the way she expected.

A lot of things inspired the book. All the people I’ve known who were interested in simplifying their lives and trying the off-the-grid lifestyle. My father’s vivid and wonderful stories about Alaska. My own experiences of moving and getting used to new places. But the most direct piece of inspiration was a magazine article I read years ago about a girl in Rigel’s position. Her family lived off-grid, but her parents had split up. The mom moved with her daughters to a large city in western Canada. One of the daughters didn’t like city life and longed for the wilderness. That girl, whose name I don’t know and whose story I read decades ago, provided the catalyst for this story. I wish her well, wherever she is now.

It was both, to tell the truth.

The long and winding part was the many years I spent writing literary fiction for adults. Like most of my friends who got MFAs in creative writing, for a long time I struggled to both write and earn a living. (Not to mention doing all that functional adult-life stuff which takes up so much time, like paying bills and doing dishes.) Publishing literary fiction can be pretty brutal. It’s really competitive. On the positive side it got me used to rejections.

Once I finally decided to try my hand at a kid-lit novel, the progress wasn’t exactly fast, because I’m not a fast writer, but it was steady. Once I had a good manuscript in hand, I got an agent (the amazing Rachel Orr), and that agent got me a deal. It wasn’t one of those stories we sometimes read about on the Internet (“I wrote a novel in two weeks and then sold it right away and got a three-book deal! No problem!”), but the progression was solid and it made sense.

That being said, I know the process is not that straightforward for a lot of kid-lit writers. I can really sympathize, because I know what it’s like to have fiction turned down repeatedly, sometimes for reasons that feel obscure and unfair.

I’m working on my second MG novel, which is about a 12-year-old girl who lives with her grandmother in New Jersey. Her mom abandoned the girl when she was very young, and she thinks about her mom quite a lot even though she would claim she doesn’t. The girl is happy enough, but her grammy is kind of timid and anxious, and it sometimes feels like all the good times are happening somewhere else to other people. Then circumstances change and all of a sudden this girl is dealing with more excitement than she knows what to do with—along with a lot of other unexpected stuff.

What advice would you give to your younger self? Is this the same you’d give to aspiring authors?

One piece of advice I would give to aspiring writers (and my younger self) is this: figure out how to tolerate rejection and criticism.

I give this particular advice because I’ve seen so many promising careers founder on the rocks of rejection. Your career isn’t over because your manuscript has gotten four or five rejections, or because some reader or editor disliked your project and wasn’t very kind about expressing their reservations. One of my clearest memories from working on 365 Days to Alaska was describing the book’s premise to a woman who heard the part about off-the-grid life and immediately said, “Why would anyone want to live like that.” She said this in the flattest, most dismissive voice you can imagine, and in the moment that feedback just crushed me. And the fact is almost all of us hear comments like that and have terrible moments of doubt.

So—I do think successful writers have got to find some toughness in themselves to deal with those times, a toughness that’s often at odds with their more delicate, sensitive sides—the parts that lead us to make art. If you can think of those rejections as signs that you’re taking your career seriously and you’re in the game, that can be a good place to be. Truthfully I can’t tell people how to get okay with rejection. All I can say is that mental toughness is something writers need to find in themselves, because we all deal with negative feedback, and most of us deal with it a lot.

Like a lot of writers, I’m pretty shy. I also don’t have the greatest self-confidence, but I finally resolved that problem by deciding that I wasn’t going to worry about it anymore. I just go for it anyway.

Cathy Carr grew up in Wisconsin, where a steady supply of her dad’s stories about his Alaskan adventures sparked her interest in the forty-ninth state. A former copy editor, library clerk, and technical writer, she now lives in New Jersey with her family and writes fiction.